News - Galaicos will be displayed at the Museum of Pontevedra

“Galaicos” will be displayed at the Museum of Pontevedra after being visited by more than 32,000 people in Madrid and Valencia

The exhibition, which will be open from October 4th to February 2nd, will also be a tribute to the Archaeological Society of Pontevedra on the occasion of its 125 th anniversary
30/09/2019

The Museum of Pontevedra will be the last stop of the exhibition “Galaicos: un pueblo entre dos mundos” (‘Gallaeci: a community between two worlds’) after its success in Madrid and Valencia. Carmela Silva, President of the Provincial Council of Pontevedra, announced today that the temporary display can be visited from next Friday, October 4th, to February 2nd in the Sixth Building of the Museum of Pontevedra. In her words, this exhibition intends to get visitors to know “the rich archaeological and cultural heritage of Galicia, especially in the province of Pontevedra”. In addition, it will also serve to commemorate the 125th anniversary of the Archaeological Society of Pontevedra, “which settled the grounds of the Museum in this town”.

President Silva remembered us that the exhibition received 18,000 visitors in the National Archaeological Museum in Madrid and 14,000 in the Prehistory Museum of Valencia “without taking into account the ones on the Night of Museums, which the Museum of Valencia dedicated to this exhibition and to everything related to the Prehistoric Era in our province”. Now, it will arrive at Pontevedra to promote Galicia’s archaeological heritage as a part of the Provincial Council’s efforts to encourage “a sustainable tourism based on culture and history aimed at attracting visitors all year round, thus reducing seasonality”.

As the President explained, thorugh “Galaicos” visitors will get to know the history of Galicia in the period between the end of the Bronze Age (1,500-800 BC) and the sixth century AC, and the link that joined two worlds, the Atlantic and the Mediterranean.

“Galicia—and the province of Pontevedra in particular—used to be the meeting ground for the Atlantic and Mediterranean cultures. We were taught that we were always on the periphery, that we didn’t have a significant role in history, and that’s absolutely false. In the days when the Atlantic and Mediterranean communities were engaged in trade, communications were done by sea, and the centre of Spain, Madrid, was very far away from them. On the contrary, we were located on a very relevant spot. We were a link between the two worlds. Therefore, this exhibition also wants to highlight the importance of Galicia’s great history”.

The president added that among the archaeological objects that will be displayed, some of them are original, emblematic pieces and other are replicas. Next to them, visitors can learn about “specific information on many of our archaeological sites, as well as admiring pictures and watching videos that will allow them to know the sites and value the importance of the archaeological scenery of our province—for example, there are forests with petroglyphs, cliffs or bays with castros and deep valleys. They will also appreciate the materiality of the architecture and urbanism of the Castro culture.”

In that sense, highlighted the importance of the settlements of A Cabeciña, Penalba, A Lanzada, Santa Trega, O Castro Hill, Castro de Alobre and Castrolandín, O Facho Hill, the Roman village of Toralla and the salinas (salt ponds) of Vigo, Adro Vello and A Lanzada. The idea is to show, “as we already did in Madrid and Valencia, the changes and continuities that took place over a long period of time—more than 2,000 years—in the history of Galicia and to give visitors the keys to understand our archaeological settlements.” 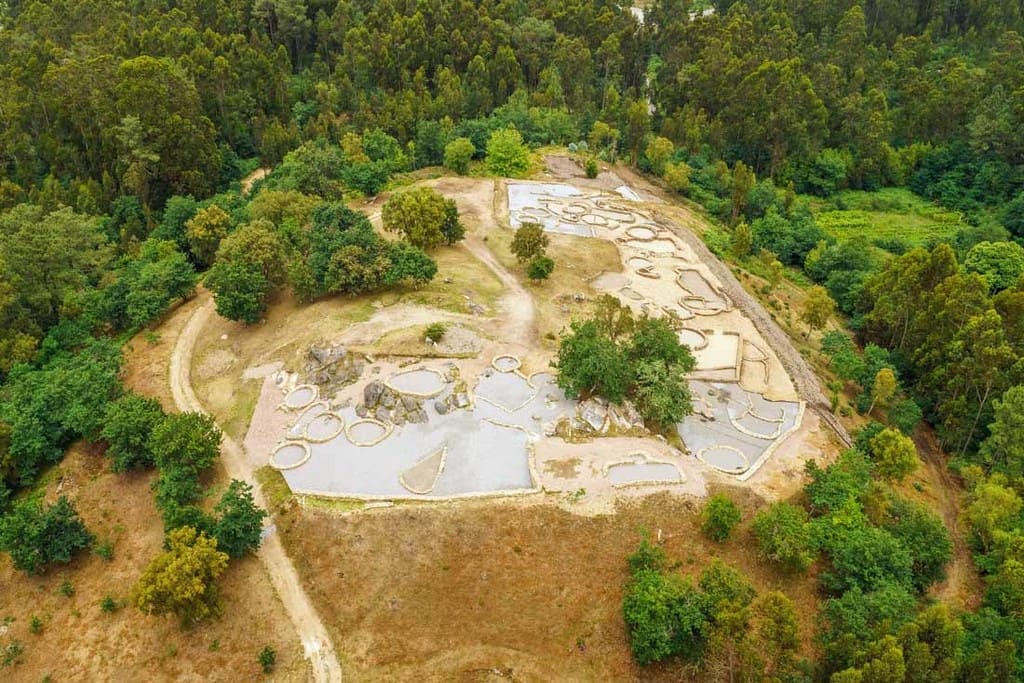 As she mentioned, the exhibition is divided in five chronological areas, all corresponding to an historical periods. The first one, called “Peasants and warriors?”, addresses the Final Bronze Age (1500-800 BC). The second, “Fortified towns of the First Iron Age”, goes from 800 to 400 BC. The third, “The Atlantic opens to the Mediterranean”, from 400 to 19 BC. The fourth, “In the sphere of Rome: Gallaecia” from the first to the third century AC. Lastly, the fifth, “The province of Gallaecia” goes from the end of the fourth to the sixth century AC.

Over the next months, and until February 2nd, the Provincial Council will carry out many activities related to this exhibition. According to the President, this will include regular and animated guided tours, conference days and historical recreations, which are planned to be linked to food events.