The guardians of the sea

The sea tradition of the province of Pontevedra has left its mark on its coastline with important lighthouses, which have witnessed shipwrecks, storms and legends full of mystery, in spots of breath-taking beauty. Their light has guided seamen in the darkness of the ocean since ancient times. Today, they offer visitors beautiful panoramic views.

Starting from the north of the province of Pontevedra, the lighthouse of Punta Cabalo, in A Illa de Arousa, offers views over the coastal inlet Ría de Arousa and its mussel rafts. On the other side of the island, in the natural park O Carreirón, visitors will have the opportunity to get in touch with nature and enjoy its heavenly beaches.

In the Ría de Pontevedra, the lighthouse of Tenlo Chico stands in the southern part of the Tambo Island, close to the picturesque village of Combarro. On the other side of the Ría, in the marina of the town of Marín, one can admire this guardian of the sea.

The lighthouse of Ons, one of the beautiful islands of the Atlantic Islands National Park is one the largest and most far-reaching lighthouses in Spain. It is located on top of Cucarno hill, and was first lit in 1865.

Facing this island and on the mainland, the lighthouse of the cape Cabo Home dominates the Costa da Vela in the O Morrazo Peninsula, and is part of a trail with beautiful views over the Cíes Islands, together with the lighthouses of Punta Robaleira and Punta Subrido.

Sailing to the Cíes Islands, crossing a walkway with the waves breaking at your feet, and discovering one of the best beaches in the world, Rodas, is a unique experience. Two lighthouses guard the so-called Illa do Faro (island of the lighthouse), located between the islands of Monteagudo and San Martiño. Climbing the slope to the lighthouse, at a height of 180 metres above sea level, is quite a challenge, but once there the views over the archipelago are a rewarding sight. On the way to the lighthouse is the charming lighthouse Faro da Porta. 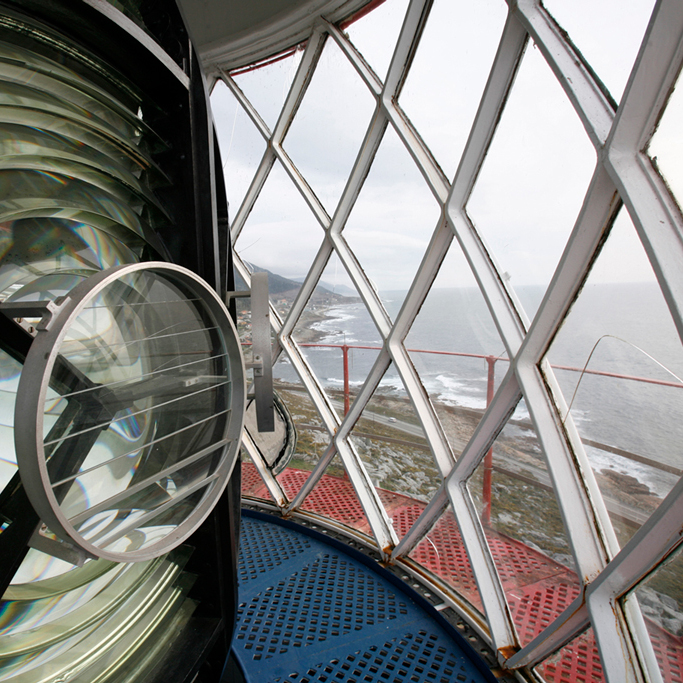 Who is living there?

The lighthouse-keeper had an aura of mystery and romance, women and men were consecrated to the protection of the coast leading an almost hermit's life. The Ons lighthouse is one of the few that still keeps this traditional trade that has been lost in recent years in other coastal towers.

The sea tradition of the province of Pontevedra has left its mark on its coastline with important lighthouses, in spots of breath-taking beauty.

The city of Vigo has a viewpoint over the sea inlet, a must if you want a picture at dusk to include in your holiday album: the hill of A Guía. There, on the seashore, there is another lighthouse. It used to serve to guide ships sailing along the bay of San Simón, being at that time its lazaretto the reason for the significant increase in maritime traffic. Also in Vigo, one can visit another important lighthouse, just facing the Museo do Mar (Museum of the Sea), which guards the city and allows visitors to enjoy beautiful views of the Ría.

The northernmost area of this route, the lighthouse of the cape Cabo Silleiro, is the entrance to the Ría de Vigo, just on the border between the towns of Oia and Baiona. The tower, with its particular prism shape, is 30 metres high and is topped by a powerful white light with a 65-kilometre range.

Lighthouse of A Illa de Ons