The province of Pontevedra boasts a rich heritage that has been carefully preserved in its museums. If you want to make the most of your visit in As Rías Baixas, you should visit these buildings and discover its important cultural legacy.

The museum was founded in 1927 by the Provincial Government of Pontevedra with the aim to continue the work of the Archaeological Society of Pontevedra, which had previously gathered an extraordinary collection of works of art and documents. Today, the Museum has over 16,000 pieces including paintings, sculptures, drawings, engravings, archaeological artefacts, coins, musical instruments, furniture, jewellery, etc. Its collections date as early as from the Prehistory and Ancient history up to the 20th century, as well as Numismatics, Decorative Arts, Ethnographic Collections and Naval Rooms.

Today, the complex is made up of six buildings, all located in the town of Pontevedra: the Ruins of San Domingos, which are the remains of the Dominic convent dating from the 14th and 15th centuries; the Sarmiento Building, displaying the Prehistory and Ceramics collection, as well as an important collection of contemporary and East Asian art; the Castro Monteagudo Building, the museum’s original headquarters; the García Flórez Building, a large urban manor house from the late 18th century; the Fernández López Building, which mainly houses paintings from the 19th and 20th centuries; and the Sixth Building, opened in 2013, with rooms for exhibitions, conferences and workshops. 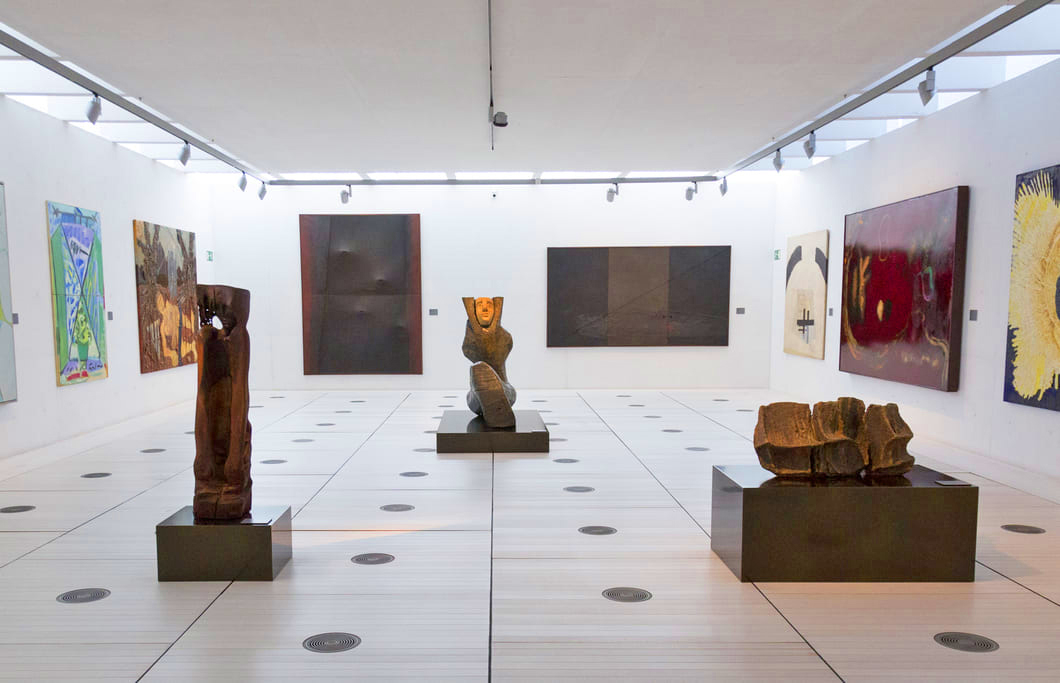 The Pazo de Lavandeira, which now houses the Municipal Museum Quiñones de León, was donated by the marquis of Alcedo in 1924. This museum free of charge has an important collection of art including more than 1,500 pieces of art from disciplines such as painting, sculpture, drawing, engraving, and applied arts; as well as artefacts found in archaeological sites in Vigo, Galicia and other parts of the Iberian Peninsula. Moreover, its collections are a valuable source of interest for those who want to learn about the history of the city of Vigo from the 15th century to the present day.

One of the main attractions of the museum is the garden area, designed in the style of the French gardens of the 19th-century Baroque period. It consists of six parts: the entrance garden, the rose garden, the French garden, and the English garden -known as the pradeira do té (tea meadow)-, the sunny terrace at the back and the wood. There is a great variety of exotic and ornamental plants, which are a delight for visitors. Moreover, the 200-year old Japanese camellias are a botanical treasure that makes this place an essential must visit on the Route of the Camellia in the province. 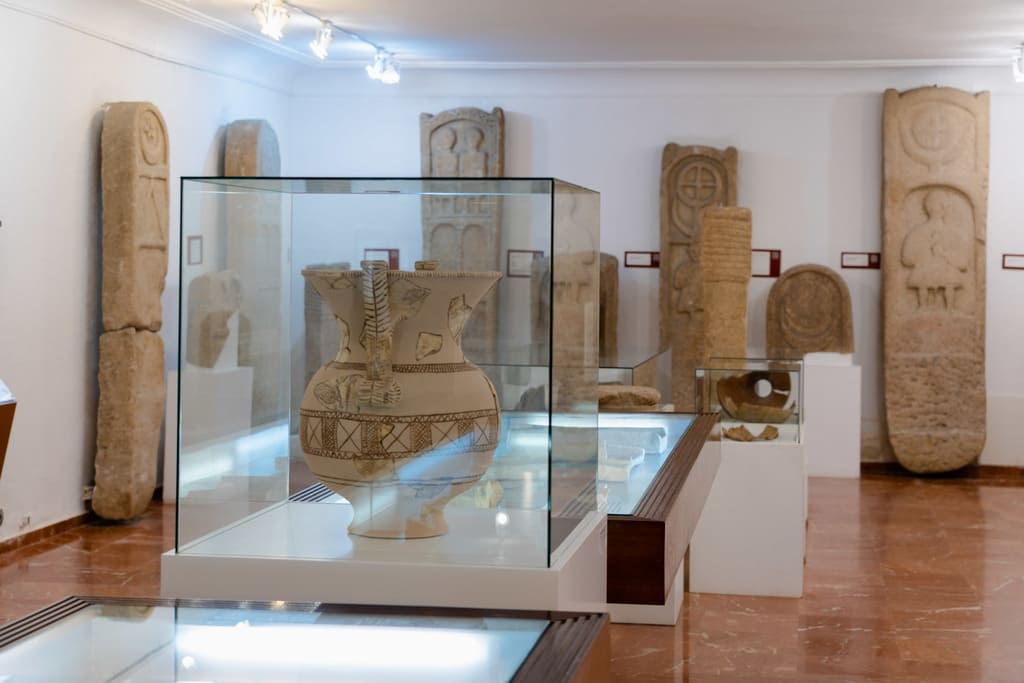 At the very heart of the city of Vigo, one can visit theMuseum of Contemporary Art (MARCO), an art centre which is aimed at promoting new proposals of contemporary art. The current building used to house Vigo’s jail and courthouse. However, since 2002 it has been dedicated to the latest artistic production of local and international renowned artists, which has turned this museum into the benchmark for the Galician and International avant-garde.

The educational programme of the museum includes visits and workshops intended for school children, activities for families, summer workshops for children, courses for adults, guided tours and workshops for artists. Side activities, such as seminars, concerts, conferences and cinema series, are also held. In addition, a library and a documentation centre round off an offer aimed at promoting culture among visitors. 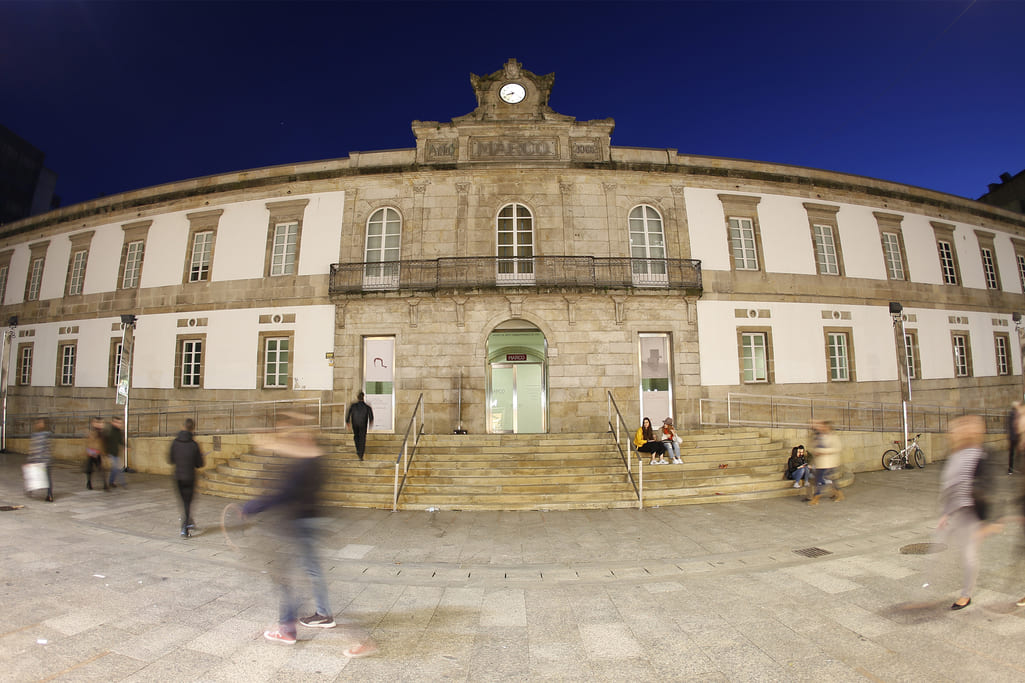 The Massó Museum is located in the facilities of the old canning Factory Massó Hermanos, close to the port of Bueu, in O Morrazo Peninsula. The museum shows information on the history of the leading industrial complex in the towns of Bueu and Cangas, including the whale-processing factory, as well as the fishery activity of the lovely town of Bueu.

The wide collection of navigation instruments, documents and books published between the 15th and 19th centuries, peculiar objects and the models of historical ships kept by the brothers Massó, namely Gaspar, José María and Antonio, were the starting point of a museum built in the oldest part of the Factory. Today, it keeps important elements of the Galician maritime and industrial heritage, and allows us to discover the incredible world of sea workers for free. 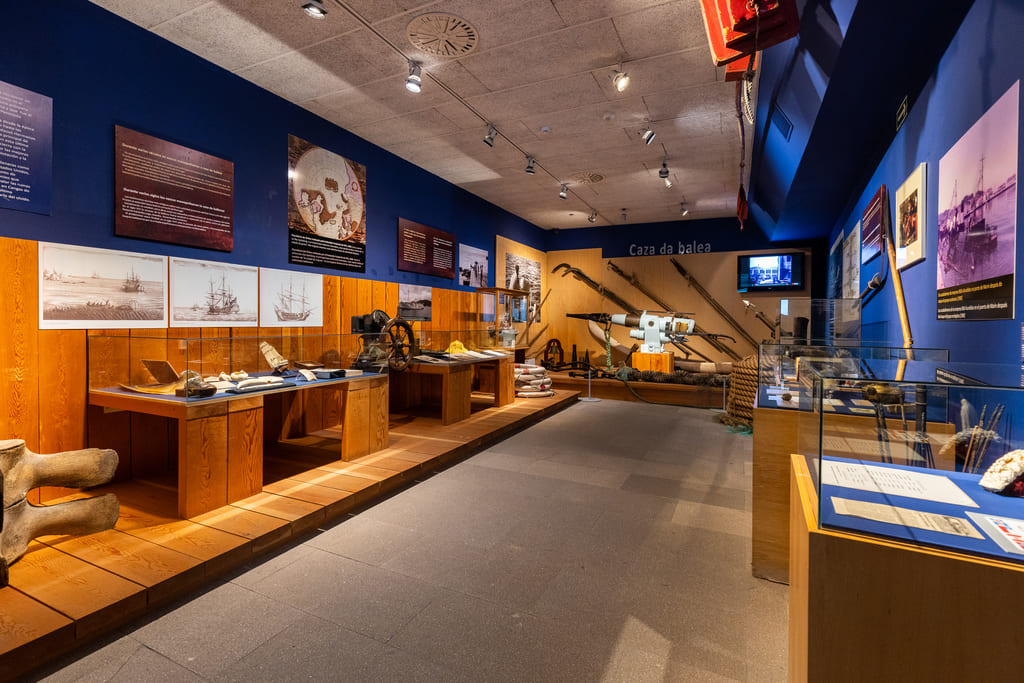 The Galician Museum of the Sea, designed by theItalian architect Aldo Rossi and the Galicianarchitect César Portela, was built on the site of the old canning factory of Alcabre, called Molino del Viento (1887), in Vigo. This 14,000 square-metre museum was opened to the public in 2002. It consists of a garden, five refurbished buildings, a square, a new building, a port with an aquarium and a lighthouse, everything surrounded by the Atlantic Ocean.

With both indoor and outdoor spaces, the museum has a free admission area, where visitors are in contact with the sea and can visit a fee-based permanent exhibition, which shows the social and economic history of the Galician fishing industry. In addition, in the aquarium one can get to know the ecosystems of the Galician coastal inlets, known as rías. It is also worth visiting the archaeological site in the surrounding area to learn more about how the fishing resources used to be exploited as early as in the Prehistory. 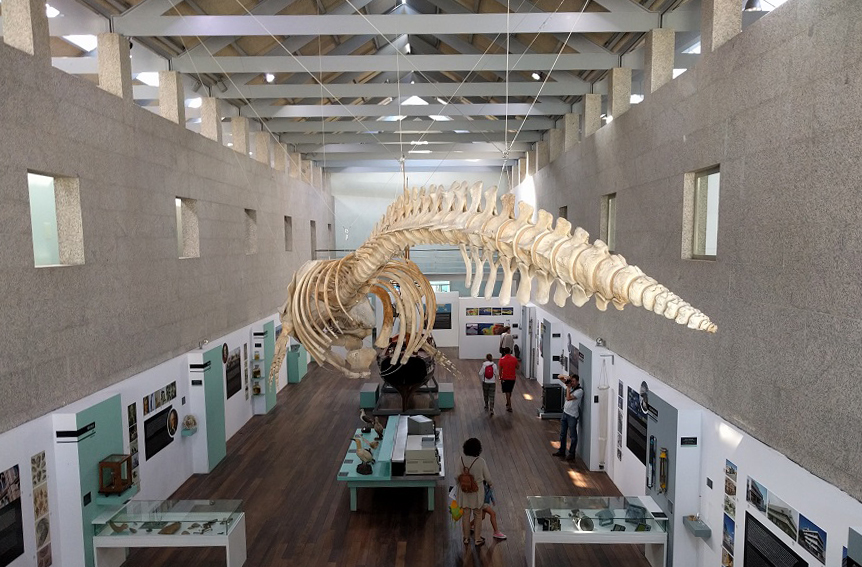 The first archaeological museum in Galicia, and one of the oldest in the region, is situated in a strategic location, on top of Trega Hill, an imposing 341-metre hill that offers stunning panoramic views over the natural border between Galicia and Portugal, and the Miño River’s estuary.

The exhibition room of theArchaeological Museum of Santa Trega Hill (MASAT), founded in 1917, provides information on the different periods of the castro (pre-Roman settlement) of Santa Trega and the archaeological research work based on this castro , dated between the 4th century BC and first century AD. In a tour from Prehistory and the Bronze Age to the Pre-Roman and Roman periods, we can see ancient scrapers, Asturian picks, axes, cave engravings, artefacts and elements of worship and ornamentation. 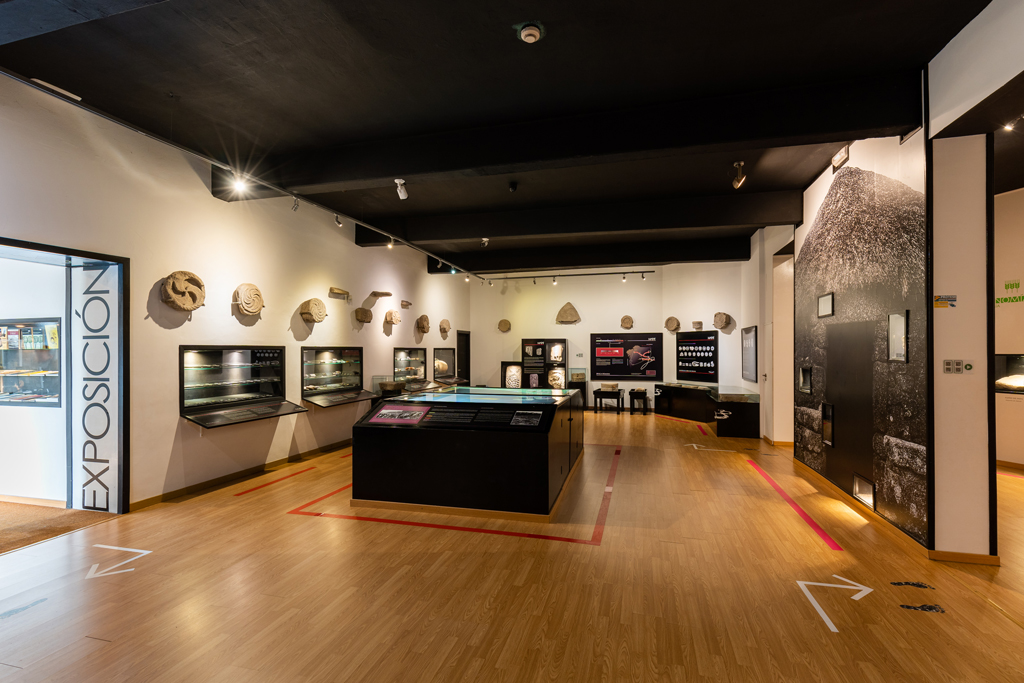 Also known as the House of Words, the Museum Verbum is found in an idyllic setting, near the Samil Beach, in the city of Vigo. The building was designed by the Galician architect César Portela with the aim to create a cultural, entertaining and educational space. It is an interactive museum with games to learn about everything related to human communication: languages, words, letters, sounds, signs…

It consists of 29 cubes that are part of a four-storey structure. A light box passes through the whole set similar to a group of Chinese boxes, each of which fits into the next larger box. This entertainment space in Vigo houses a temporary exhibition room, as well as an auditorium and a conference room, and it also organizes interactive activities for schoolchildren, cultural associations, families and visitors in general. 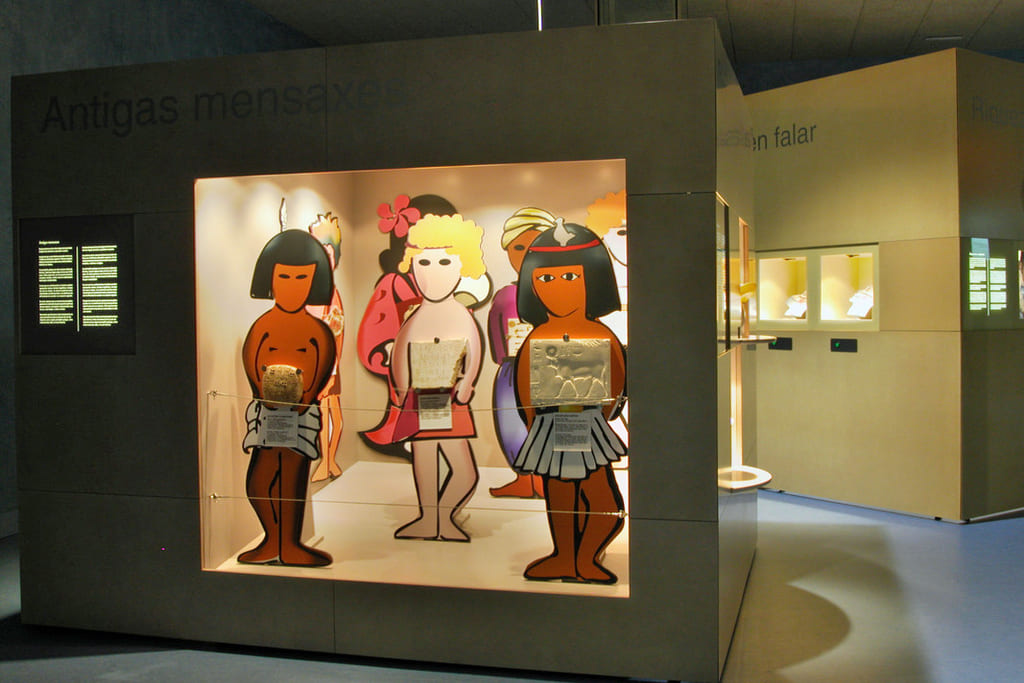