Sunken galleons loaded with invaluable treasures, moors living underneath the castros, a queen who uses a secret passage for her love and political affairs, labyrinths with hidden meanings, a knight who emerges from the water just by the boat transporting the remains of the Apostle Saint James... The province of Pontevedra has many myths and legends about its forests, villages, inlets, rivers, islands and stones. Fiction or reality?

In 1702, the Ría de Vigo was the setting of a battle between the Franco-Spanish Army and the victorious Anglo-Dutch Army. The Spanish silver fleet was loaded with treasures from America. Part of the cargo had been off-loaded before the battle, and the victorious Anglo-Dutch Army captured the rest. However, during the battle some of the ships captured were sunk by the crew, and this was the origin of the legend of the treasure of Rande. Since then, hunt treasurers have been trying to find it but without success. The Battle of Rande was depicted in Jules Verne’s work Twenty Thousand Leagues Under the Sea. In this novel, Captain Nemo roams the depths of the Ría de Vigo with the Nautilus and shows Annorax a treasure under the sea. Since then, treasure hunters have searched these treasures but they have been unsuccessful so far. 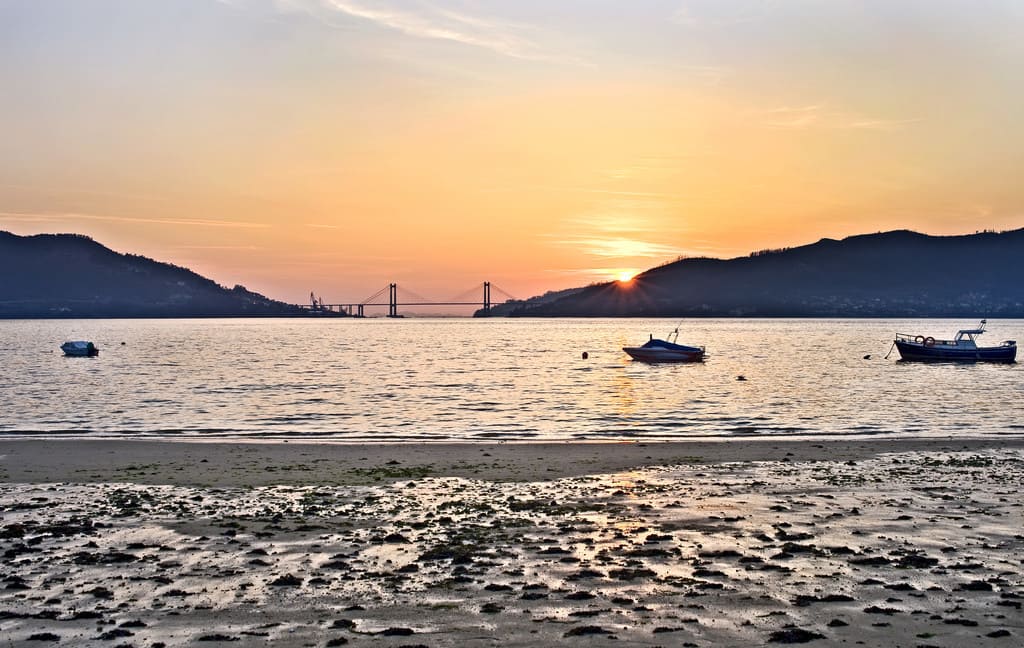 A Toxa Island, in O Grove, is one of the most important thermal resorts in Europe. According to a popular story, told in 1899 by the Galician writer Emilia Pardo Bazán, this resort was born out of the surprising healing of a donkey. "In O Grove, a small village on the border coast, a villager owned a scabby donkey, which was almost bald and covered with scabs. His owner, who did not want to slaughter the poor animal, abandoned it on the island. When he returned, he was astonished to see that the animal was healthy, fat and scabless". The man found out that the donkey "was in the habit of rolling in a certain muddy puddle, next to a stream of boiling water". From then on, the therapeutic properties of the Toxa’s waters became popular. 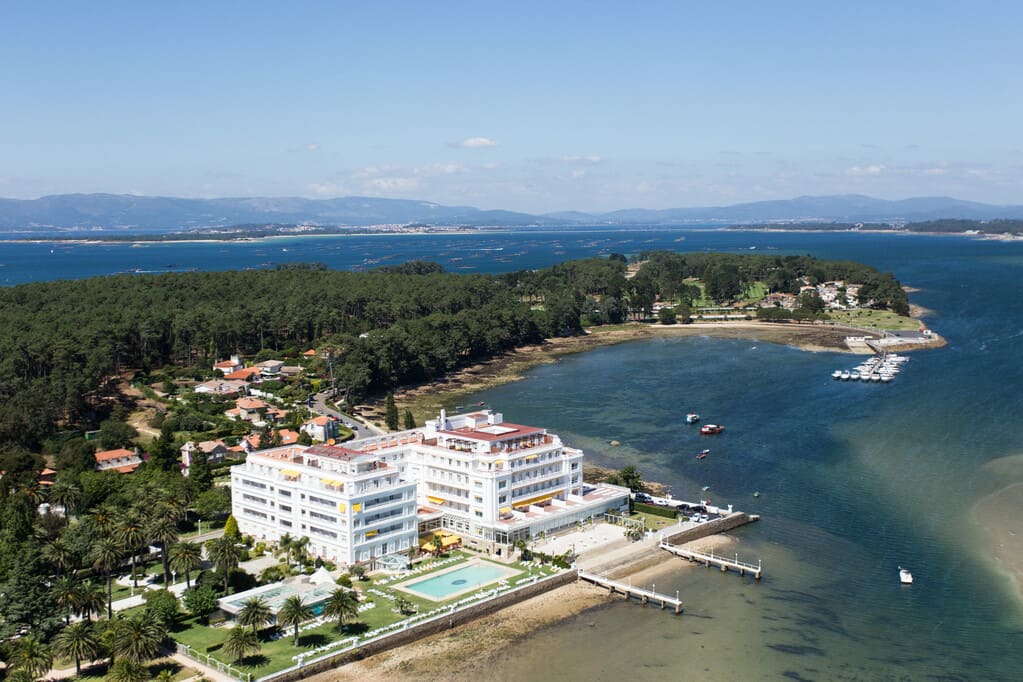 Located in Mondariz, the imposing Sobroso Castle is full of legends related to the Queen Urraca. She commissioned the construction of an underground passageway that crossed the Miño River to reach Portugal. She used this tunnel for her political and love affairs. After being besieged in the castle by the supporters of her son, the Count of Traba, and her half-sister Teresa, according to legend, she managed to escape through a 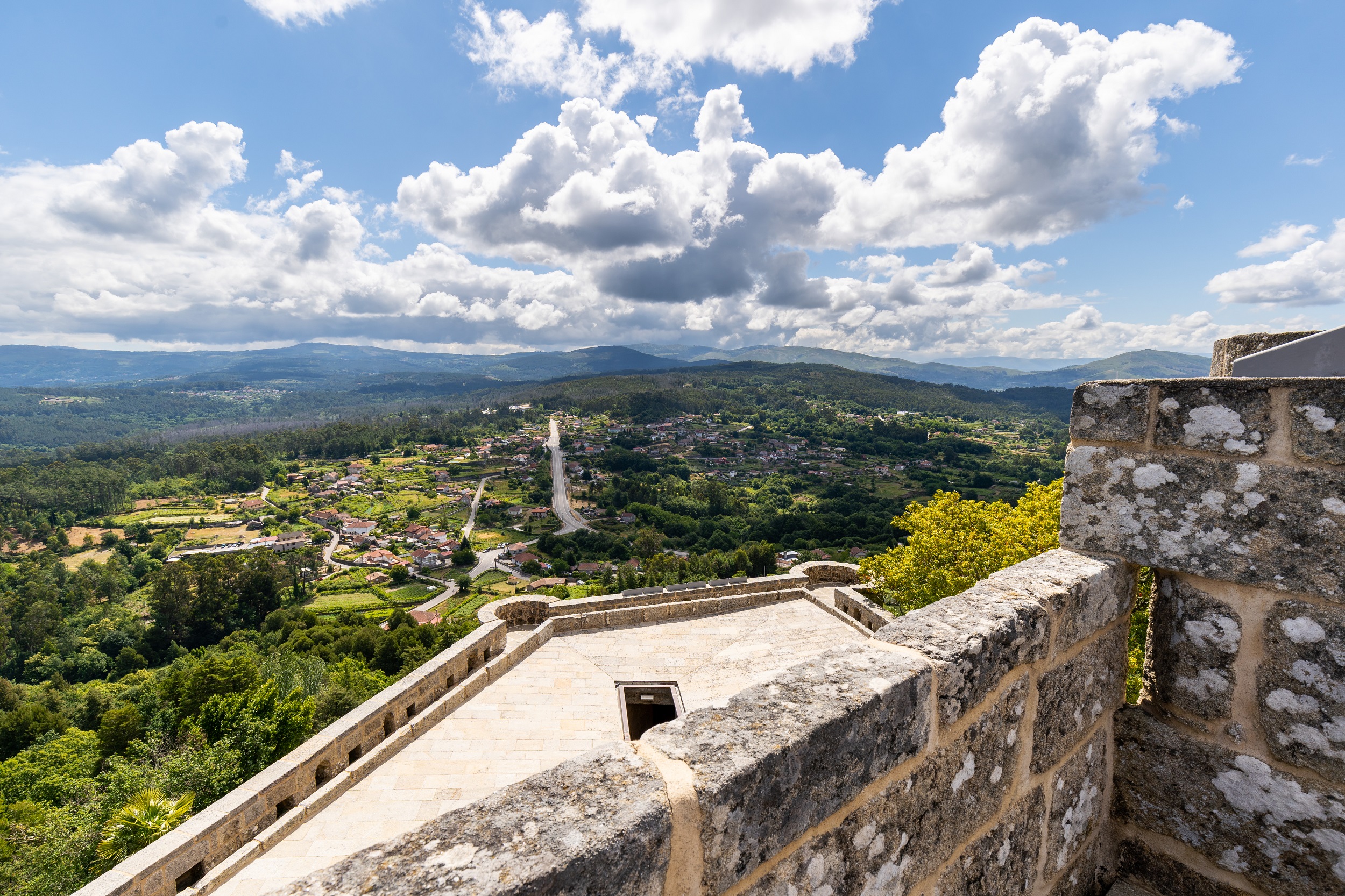 The Knight of Bouzas

The tradition of wearing a scallop shell on the hat and a sackcloth on the pilgrimage to the city of Santiago de Compostela has its origin in a legend linked to the city of Vigo. During a wedding, there was a game which consisted of some horsemen throwing their spears into the air while galloping to pick them up before they reached the ground. However, the groom, during the game, accidentally fell into the sea and disappeared, leaving nothing but a foam wake leading to a nearby boat that was transporting the dead body of the Apostle Saint James. The groom and the horse with the saddle came to the surface in perfect condition and covered in scallop shells. 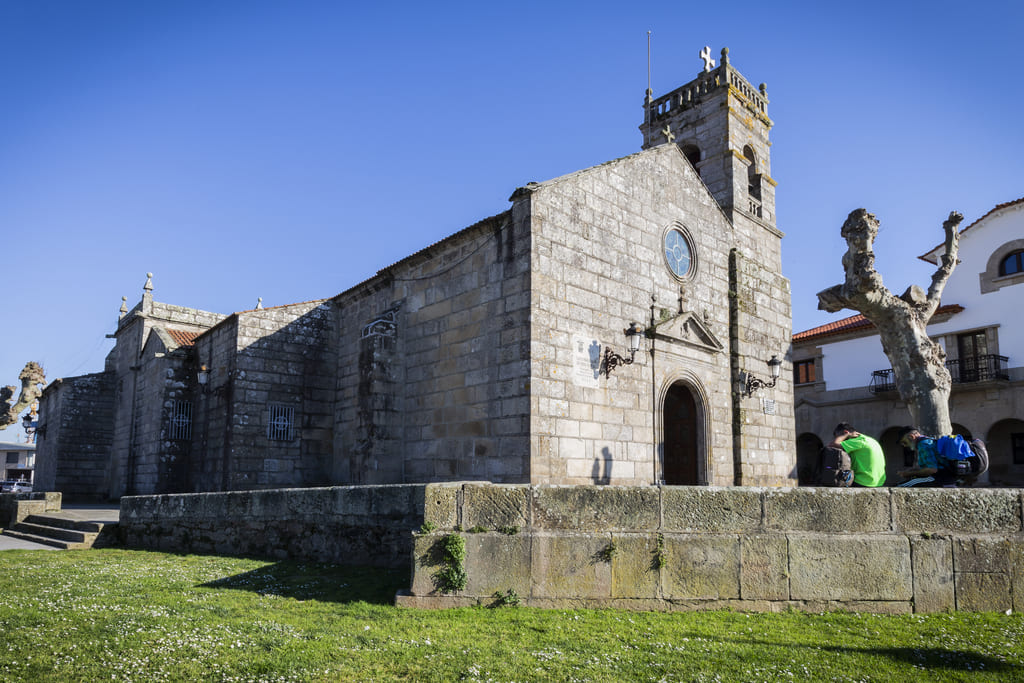 The region of Deza is full of legends associated with Celtic mythology and Christianity: women turned into snakes, mouros (supernatural beings who inhabited the lands of Galicia) living underground, secret passageways, buried treasures, caprine men, and cursed people transformed into animals. There are many myths and supernatural stories about the pre-Roman settlements, popularly known as castros. The interpretation centre Castro Deza is the perfect place to learn about the life, customs, food and legends associated with the culture of the castros. 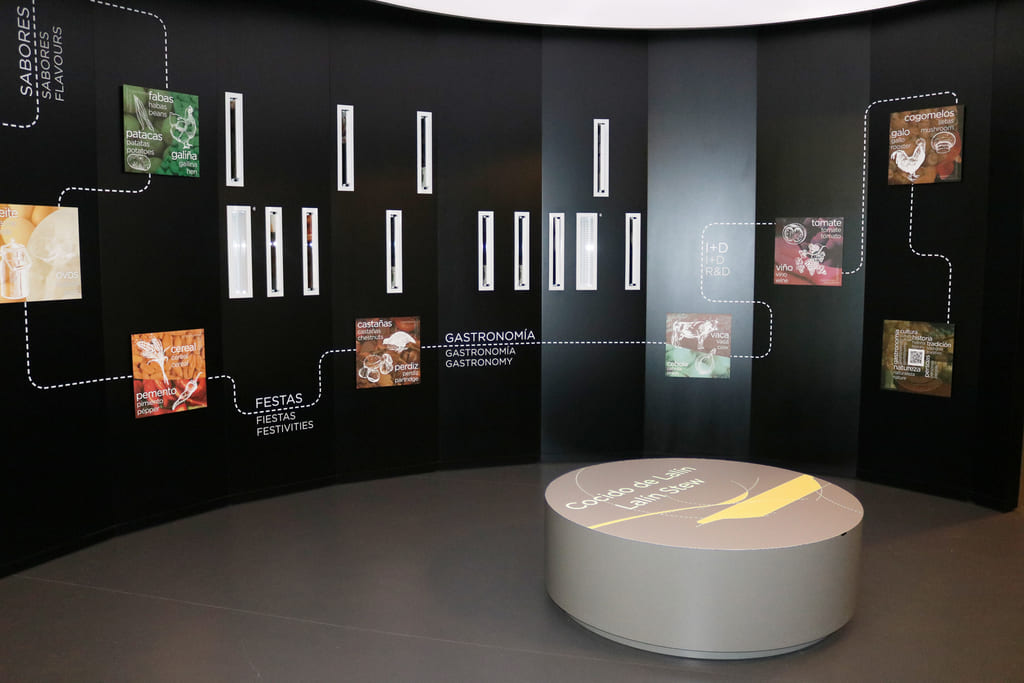 The labyrinth of Mogor

Rites of passage, the solar calendar, fertility and funerary symbols are some of the possible meanings of the labyrinths carved in stone in different parts of the province of Pontevedra. The magical and mysterious labyrinth of Mogor (Marín), similar to others found in countries such as Lapland or Finland, is located in a breath-taking setting on the coast of the region of O Morrazo. 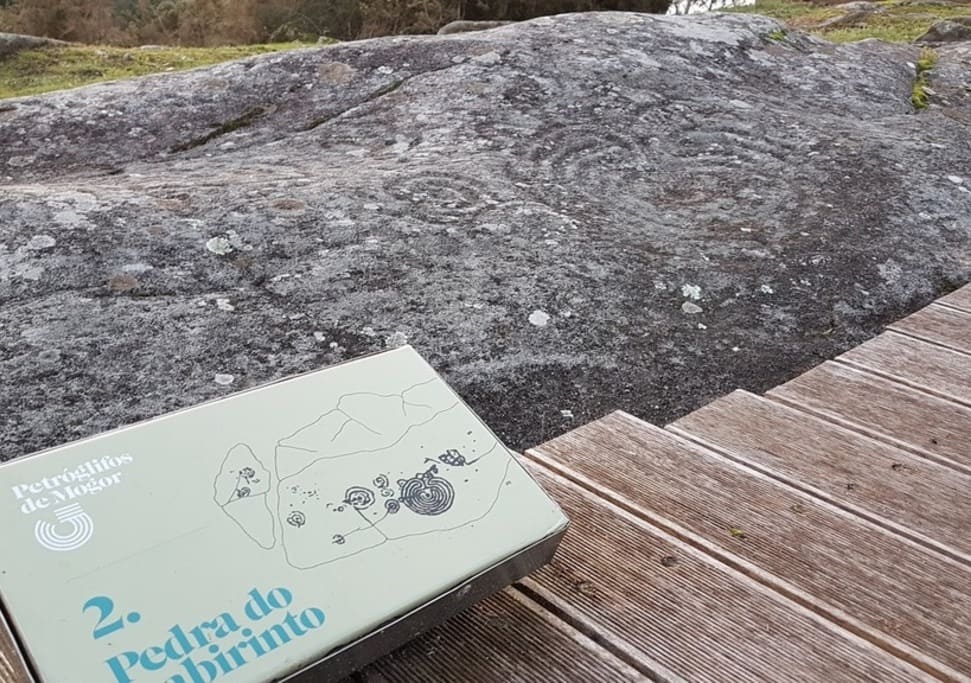 The castro in Santa Trega Hill is a magical place surrounded by mysteries and legends that take us back in time to the Galicia of our ancient people. One of these stories revolves around Saint Trega, to whom the hill was named after. She appeared to a shepherdess in the 14th century, during a period of great drought. The girl asked her to bring back the rain, and Saint Trega replied that then the whole village had to climb up the hill in procession and keep fasting for three days. Locals did as she said, and it started to rain shortly after. To express gratitude to her, locals would built a shrine, where they still go in procession every year. 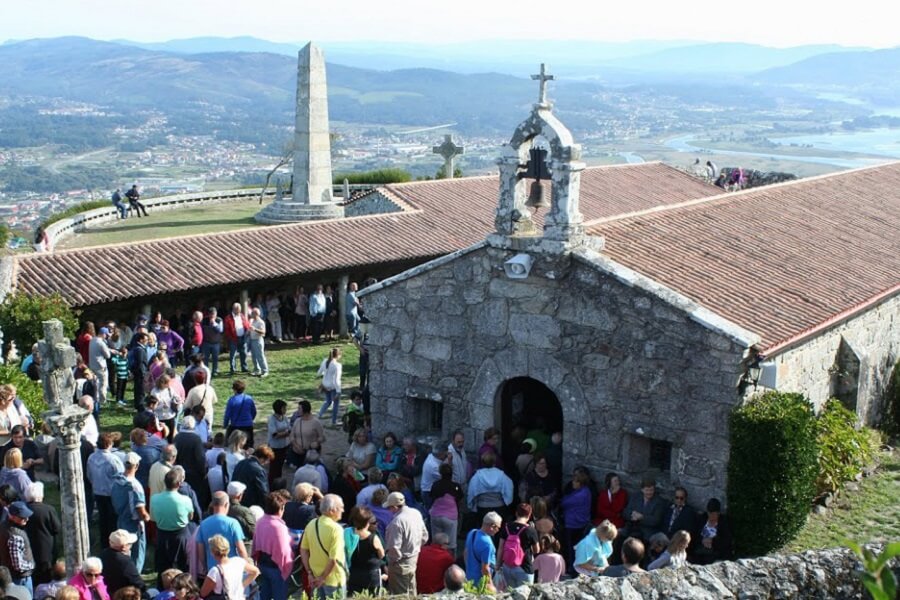 The Buraco do Inferno (“Hell’s hole”) on the Ons Island is a mythical place from which, it has been said, one can hear the cry of tormented souls in the Eternal Fire during storms. A bull with golden horns guards this access to the world of the dead. 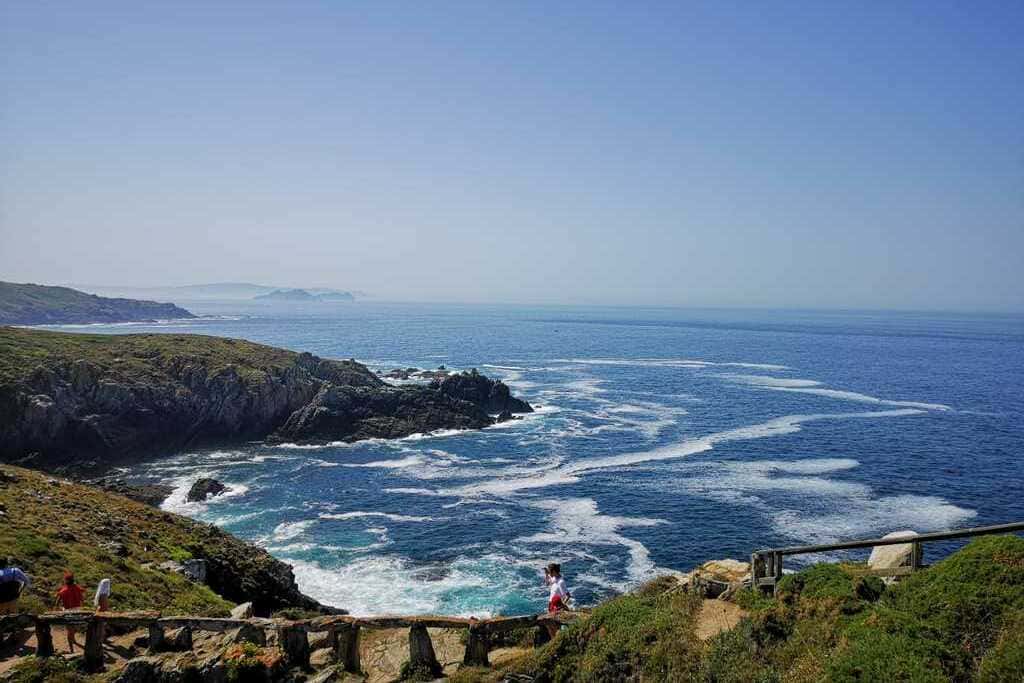 The Tambo Island, in the town of Poio, is also surrounded by legend. According to a popular story, the Saint Trahamunda, a novice from the convent of San Martiño, located in this small island, was kidnapped by the Moors and taken to the city of Córdoba. Trahamunda asked God to free her and to be in the place of San Xoán de Poio the following day, and the miracle occurred at once. It is said that the island was attacked by the mythical English pirate Francis Drake. Another legend has it that at dusk, in Tambo, a "Moorish" woman used to summon a bull which transported the bodies of the dead to this island. 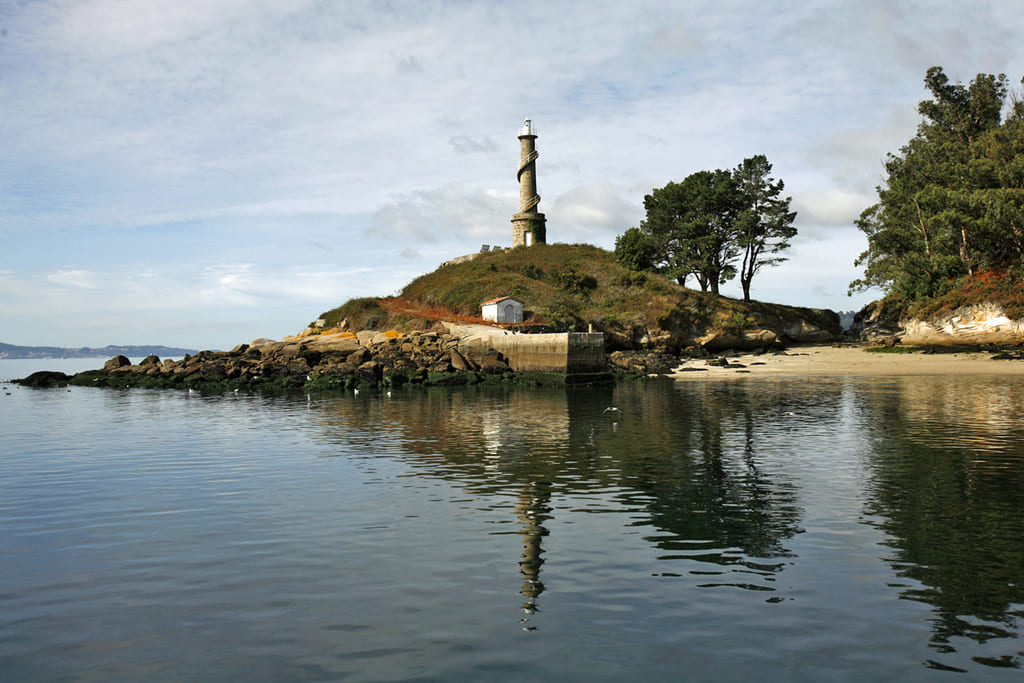 The patron saint of the town of Tui is other figure whose history is filled with legend. Pedro González or Pedro Telmo was a humble brother, beatified in 1254 and appointed in 1745 as patron saint of sailors. He commissioned the construction of many bridges, such as the ones in Ribadavia (Ourense) and A Ramallosa. The latter crosses the Miñor River and connects the towns of Nigrán and Baiona. Legend has it that, when preaching before a crowd, a storm began and split the clouds in two, pushing them away and clearing the sky just over the people gathered. 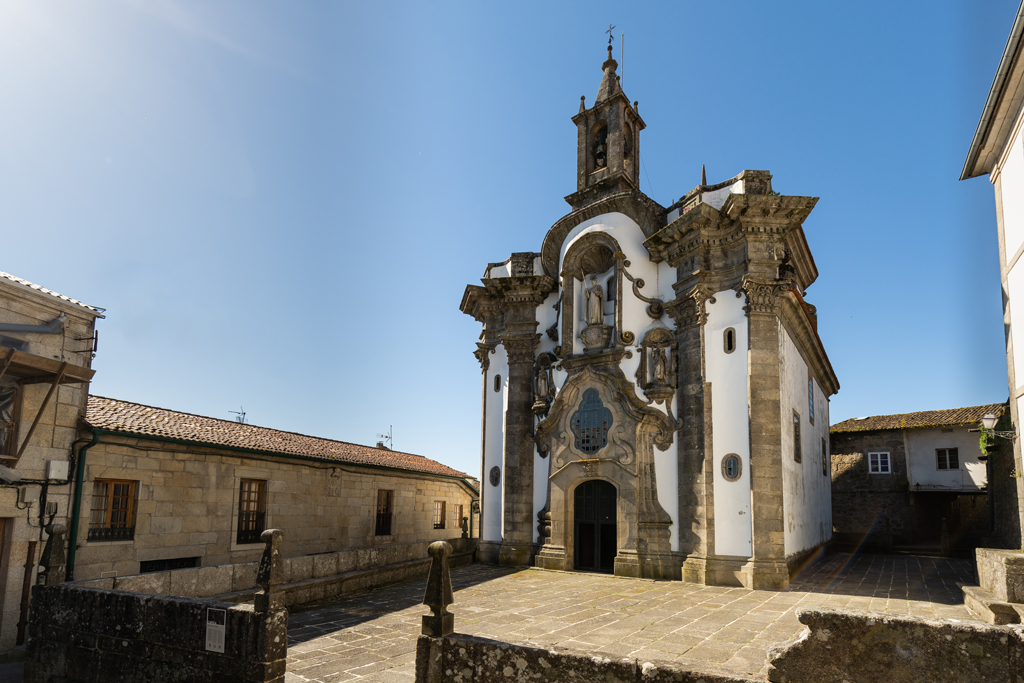 It is said that in a pool located in the Domaio Hills (Moaña), very close to the Strait of Rande, it is still possible to hear the moans of a beautiful Moorish woman. Her father had killed the peasant she was in love with in this pool, and when she realized, she fell into the water and drowned. The Moorish woman appears every Saint John's Eve brushing her hair with a golden comb. 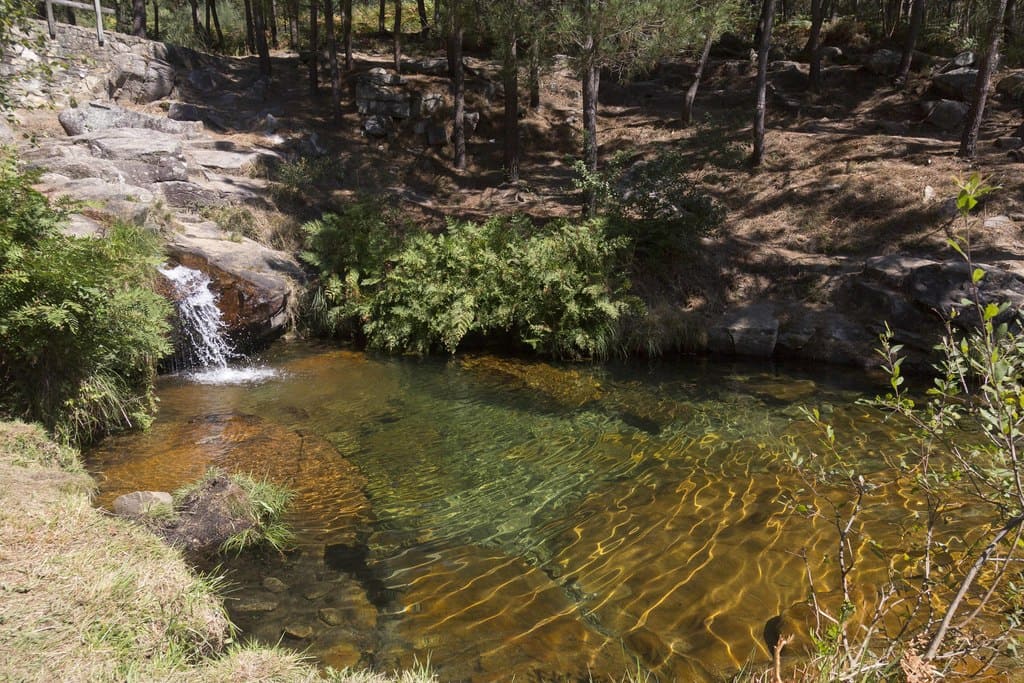 One of the legends of the Deza region linked to the castros takes place in the municipality of Agolada. It is said that in Castro Marcelín lived a queen named Marcela who hid a treasure behind a stone door, along with different keys. Today, the town of Agolada is popular for its constructions known as pendellos, which were the stalls of an important Galician market two centuries ago. Visitors will have the opportunity to be immersed in the rural and social life of the 18th century with a visit to this historic site. 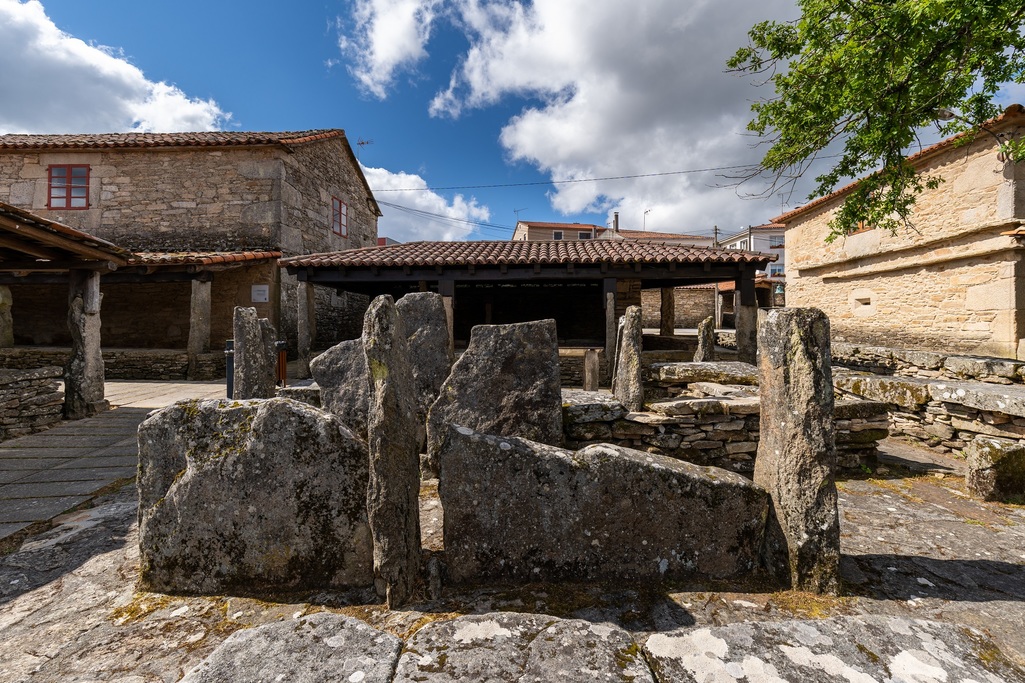 History and legend are combined in the Casa da Peste, located in the place of A Godela. According to legend, people affected by the plague were quarantined inside this eighteenth-century building. In fact, during the first decades of the 18th century there was an outbreak of the disease in Galicia, which makes the story plausible.

The Santa Compaña (Holy Company) is one of the most popular mythical beliefs in As Rías Baixas and Galicia. It is a procession of tormented souls wandering barefoot and wearing white cloaks. Every soul holds a candle, and their presence can be detected by the scent of melted wax. The procession is led by the “Estadea”, who is usually taller. Sometimes they carry a coffin bearing the body of a relative of the person who sees the procession. Shortly after, the relative dies. The person who sees the Santa Compaña may be then the leader of the procession who carried the cross and the cauldron of holy water. He can only be freed of the curse if he manages to come across another person during the procession, as the curse will be passed onto that person.