The ancient home
of the Gallaeci

The circular constructions of the pre-Roman hillfort settlements, popularly known as castros in As Rías Baixas, are surrounded by stunning landscapes. Santa Trega, O Facho, Castrolandín, A Lanzada... The Gallaeci have left their mark in strategic spots on both the coast and inland. A visit to these places will take you back to ancient times.

The stone has been part of the landscape for thousands of years as a faithful witness of the history of the province of Pontevedra. The castros, native pre-Roman hillfort settlements from the Iron Age, had been inhabited for centuries until the Roman occupation. Over time, they were forgotten and ended up hidden underground. At present, they emerge again after the thorough excavations carried out to retrieve them.

The most impressive castro, at the top of the Santa Trega Hill, with stunning views to the mouth of the Miño River and the Atlantic Ocean, is the castro of Santa Trega, in the municipality of A Guarda, right on the border with Portugal. It dates from the 4th century BC-1st century AD.

This is a symbolic place found in a strategic position and preserves a great number of rock carvings from the Bronze Age. It is known, after consecutive excavations, that the site covered over 20 hectares, even though nowadays there are only four sectors visible: the north sector, called Calvo; the central one, Mergelina; the south door, and several houses on the top of the hill.

The first written references about this site date back to the second half of the 19th century, and they mention several archaeological pieces discovered all over the hill, from the top of the hill to the banks of the Miño River. Among these, a bronze statuette representing Hercules, found in 1860, stands out. 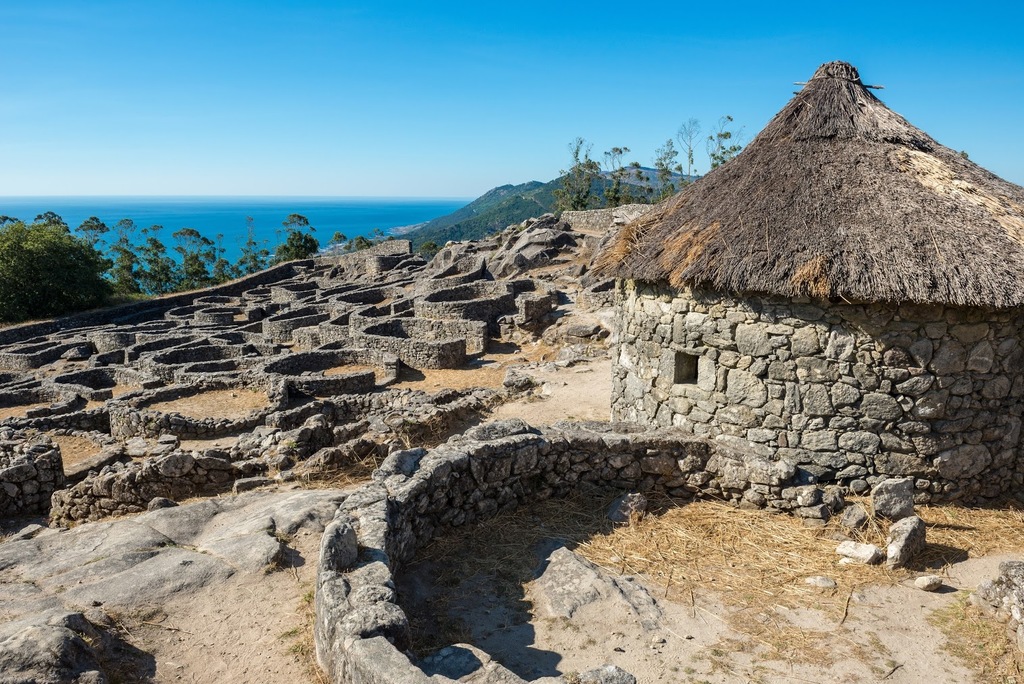 The archaeological site of A Lanzada, in the town of Sanxenxo, located on the seaside, in a stunning spot, was inhabited during a long period of time. Throughout history, this area has been devoted to different activities. The most important periods were the settlement of the Gallaeci (5th-2nd century BC), the fish salting factory (3rd-2nd century BCE), the Roman settlement and necropolis (1st-3rd century AD), the small church and necropolis (4th-5th century AD) and the medieval fortress (11th-15th century AD).

Like other ancient coastal settlements from the Final Bronze Age, A Lanzada was still inhabited in the Iron Age, but there is no evidence of any fortified constructions, which makes it unique in the northwest of the Iberian Peninsula. It was large in size and was a long-lasting and growing commercial emporium, opening new trading routes for the northwest of the Peninsula during the ancient period.

The most remarkable documented element is the large necropolis, exceptional because of the good state of preservation of the bones found. In the Middle Ages, the settlement was moved to the top, where a fortress was built in the 11th century to defend the coast from the attacks of the Saracens and the Normans. 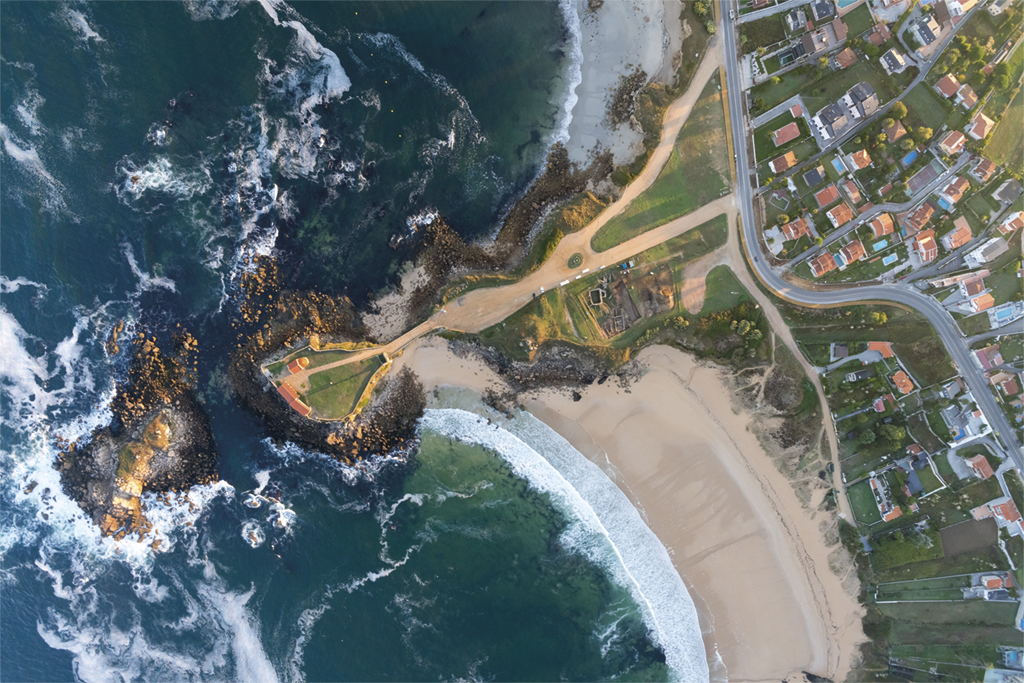 Just like the Santa Trega Hill, O Facho was inhabited during a long period, from the 8th century BC up to the 4th or 5th century AD. The archaeological site of O Facho crowns a hill with stunning views over the Cíes Islands and the Costa da Vela.

This site is unique and internationally renowned for having a sanctuary from the Roman era with over one hundred documented altars from different historical periods. It gathers elements from different periods in history. According to the religious universe reflected in these altars from the Roman era, there is evidence that they could recreate cults from even former times.

Therefore, this site from the Iron Age may have been a sanctuary where rites were performed. 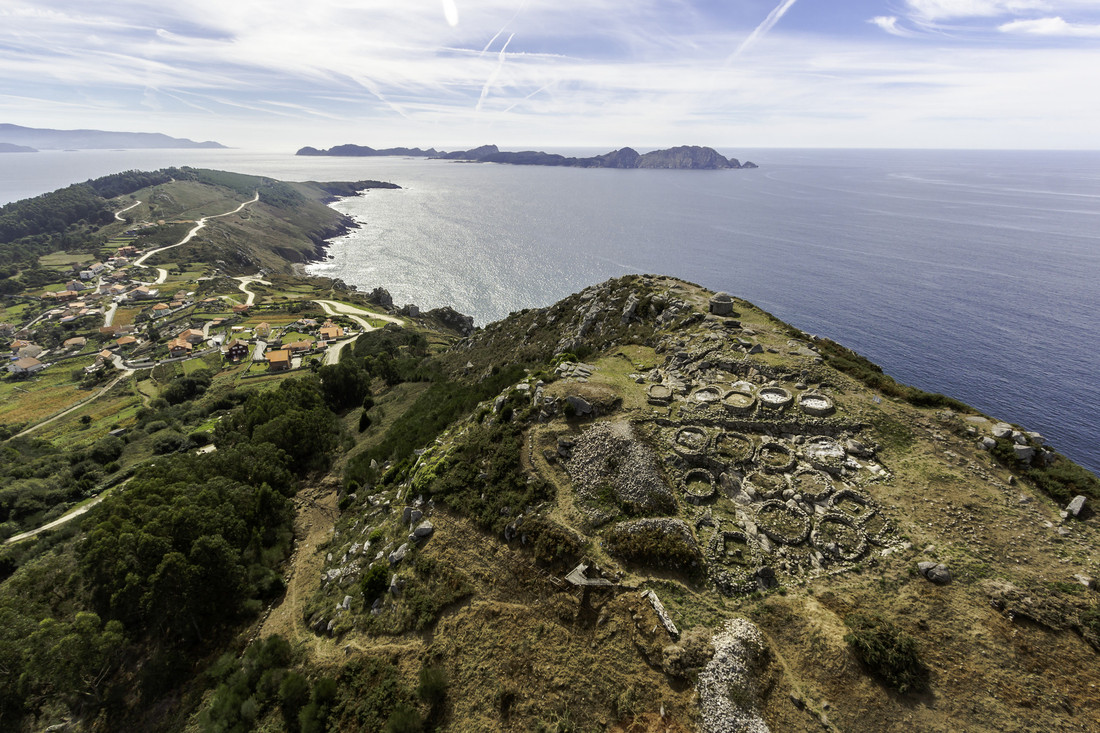 This archaeological site, located in the town of Oia, is surrounded by a stunning landscape and clearly shows the transition between the Final Bronze Age and the Iron Age. It was inhabited between the 10th and 8th centuries BC.

Around the settlement, a great wall was built. Outside it, there is a set of rock carvings of incomplete connected circles.

These decorative motifs, exceptional in Galicia, are identical to those of the dolmen of Gravinis, in Brittany, documented in the final stage of the Megalithic era. In fact, A Cabeciña is part of a network of castros, which evidences the exchange of ideas and objects between the different communities at the beginning of the 1st millennium BC. 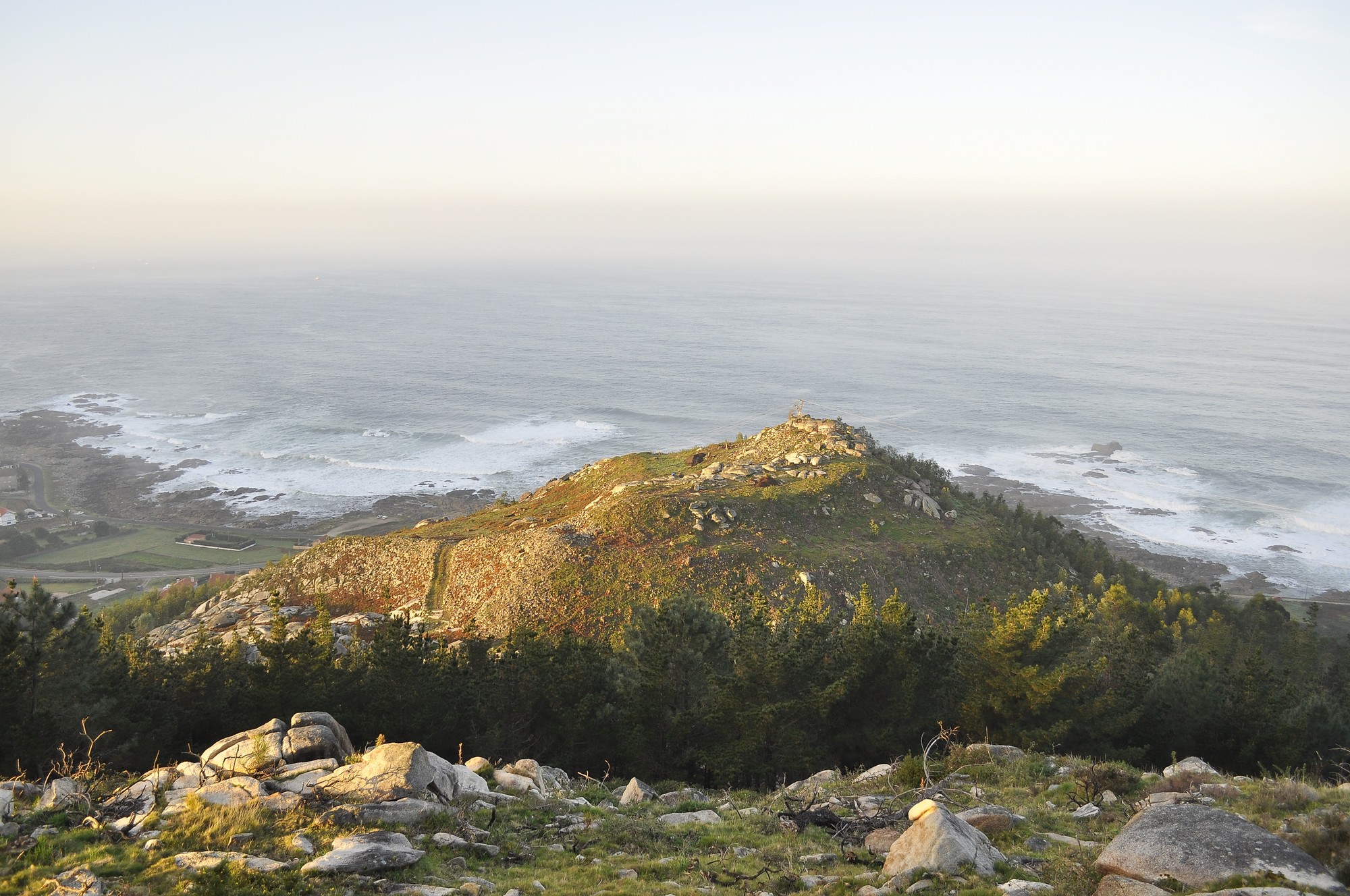 Nowadays, this castro is part of a park in the town centre of Vilagarcía de Arousa. There, you can stroll around this ancient settlement from the Iron Age, inhabited from the 1st century BC and the 3rd century AD. At first, Alobre was a typical pre-Roman settlement with a commercial character due to its privileged location on the inlet Ría de Arousa.

The artefacts discovered in the excavations were a proof of the strong bonds this community had with the Mediterranean areas and, particularly, with the south of the Iberian Peninsula, the Italian Peninsula and the Balearic Islands.The metal pieces are very important, especially the ones in bronze, which are over 400 in number. As the castro was close to the sea, its inhabitants were skilled fishermen and shellfish harvesters. 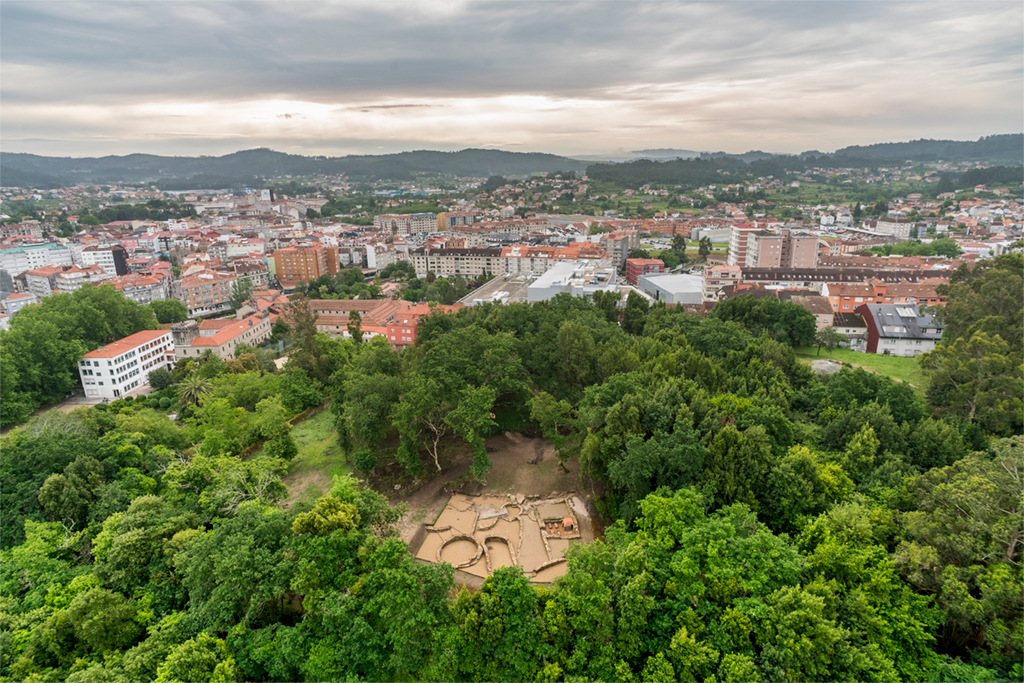 The fortified settlement of Castrolandín, very close to the thermal town of Cuntis, dating from the end of the Iron Age, was inhabited between the 4th century BC and the 1st century AD. The excavations carried out in 2004 were proof of the existence of eighteen buildings dating from different periods, serving different purposes and varying in the number of floors. Nowadays, only ten of them can be visited.

The settlement had a monumental and stepped entrance flanked by two fortified towers. Inside the upper part, or acropolis, there were differents paces for the family, with small patios, stairs, storage rooms and houses. During the Roman era, this site remained almost abandoned, and only one house was left in place. 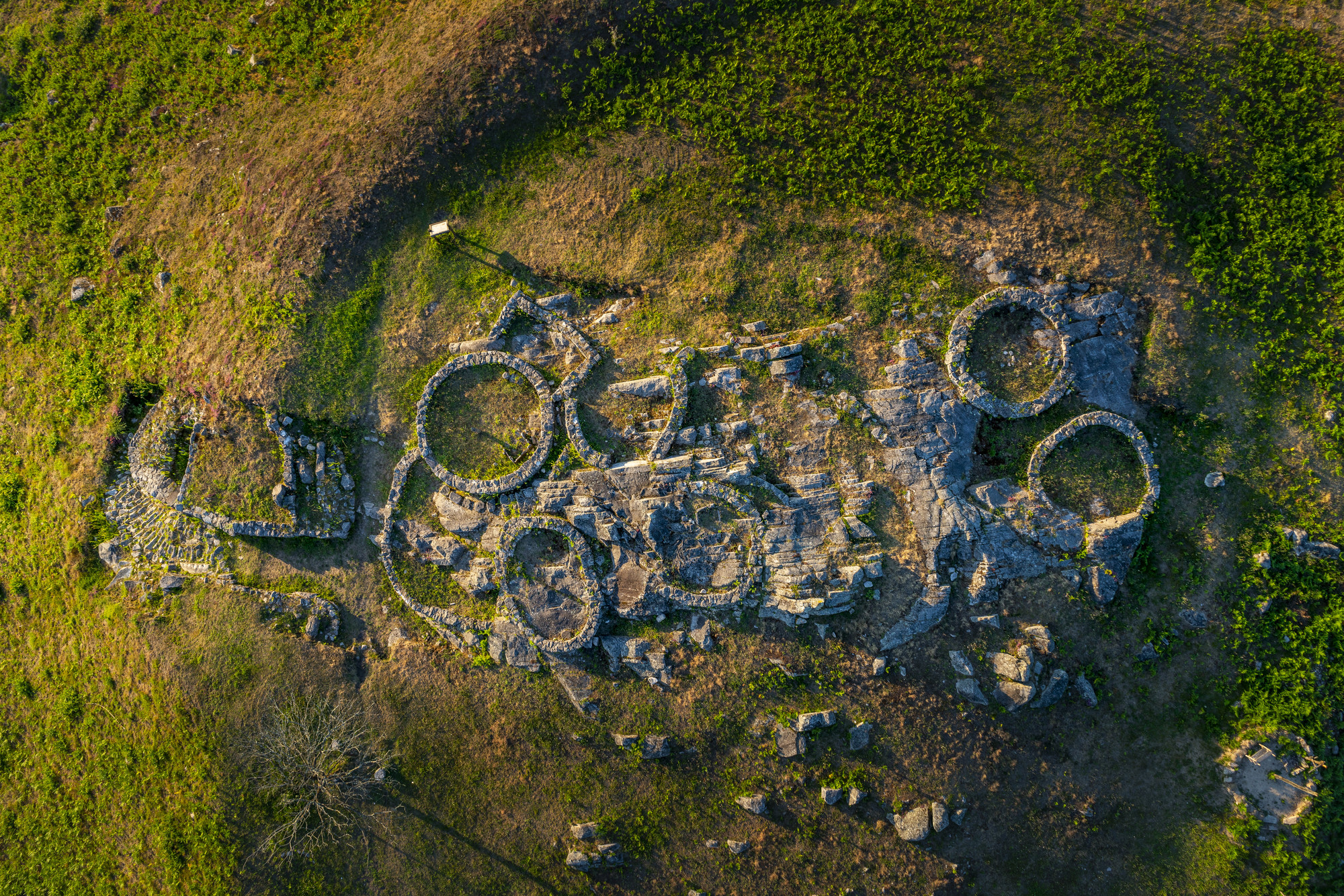 In the región of O Salnés, in the town of Ribadumia, immersed in nature, is O Castro Hill. The period of occupation of this fortified settlement dates from the 6th century BC and the 1st century AD. During the excavations in 2011, remains of completely different castros were found in three areas.

In the north area, according to some documents, there were several circular and oval houses. The central one could be a workplace for the different trades, in fact, it has remains of four different structures, one of which was related to the metallurgical work; and in the south area there seemed to be a construction with a rectangular floor, which is thought to have been a storage area because some Roman amphorae were found. In the fourth excavation campaigns - carried out in a 4,800 square-metre area – 2,039 stratigraphic units and over 100,000 archaeological pieces were documented. Ceramics was the material most commonly found. 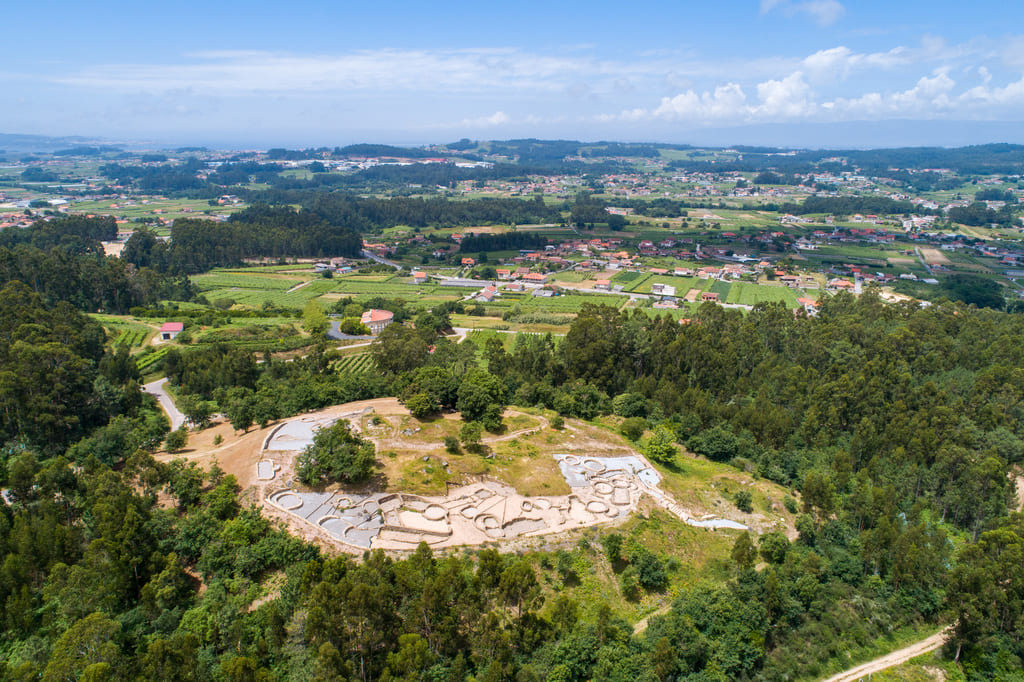 Next to O Carreiro Beach, in the town of O Grove, stands this important archaeological site, which offers stunning views over the coastal inlet Ría de Arousa. The data obtained during the excavations reveal the presence of a salting factory, perhaps related to a Roman villa or a former one. On the grounds of this Roman settlement, an ecclesiastic building and a burial necropolis were erected. Finally, a tower was built and the structures were enlarged in order to protect the inlet Ría de Arousa from the attacks of the Vikings. 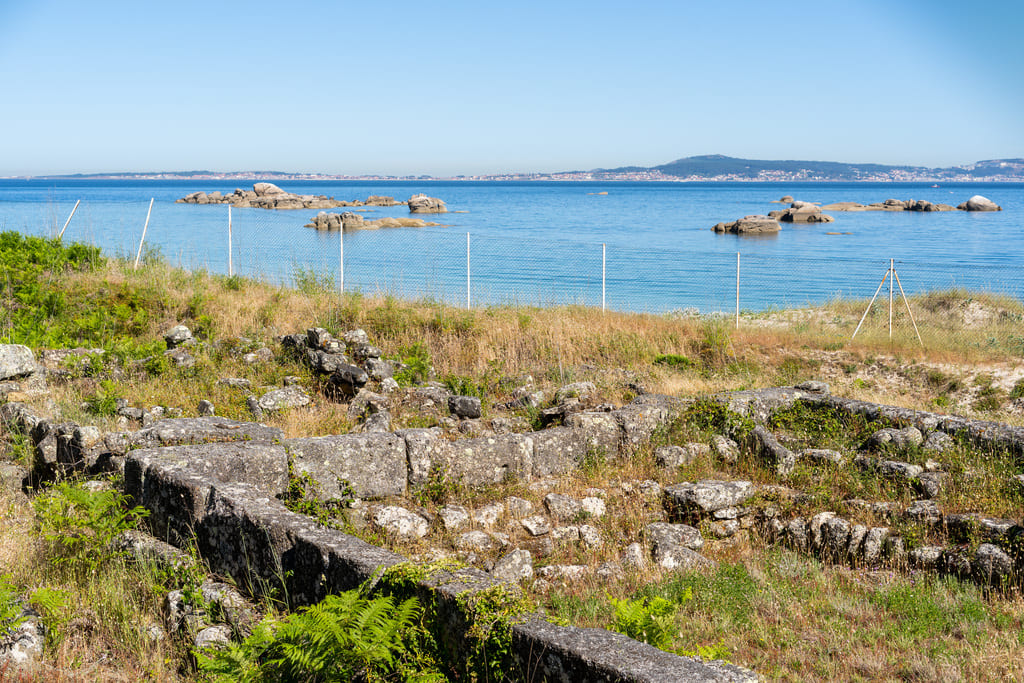 The inland part of the province of Pontevedra keeps a true archaeological treasure in the town of Campo Lameiro. There, one can visit thecastro of Penalba, located in a place with a large number of rock carvings. It was originally a settlement from the Final Bronze Age with a farming-based economy. On the top is preserved the so-called rock Pedra da Serpe, a snake-shaped petroglyph linked to fertility rituals. In a second stage, the defensive walls of the village were built. 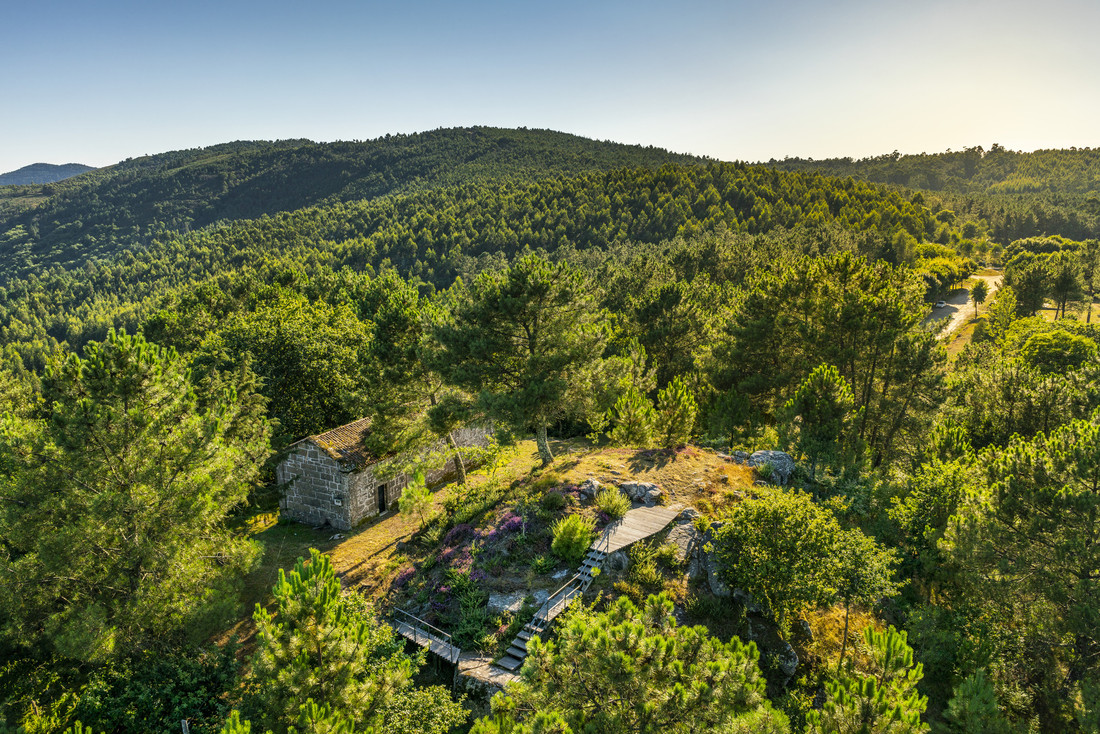 The castro of Troña is a settlement situated in the town of Ponteareas. Like many of the Galician castros it reached its peak between the 1st century BC and 2nd century AD. It has a defensive system composed of an outer wall, a ditch and a rampart. Around 30 houses of circular, oval, square and rectangular shapes have been found on this site. An important element of the castro is the Serpe de Troña, a petroglyph depicting a serpent in a heraldic pose. It is carved into the vertical face of a stone. 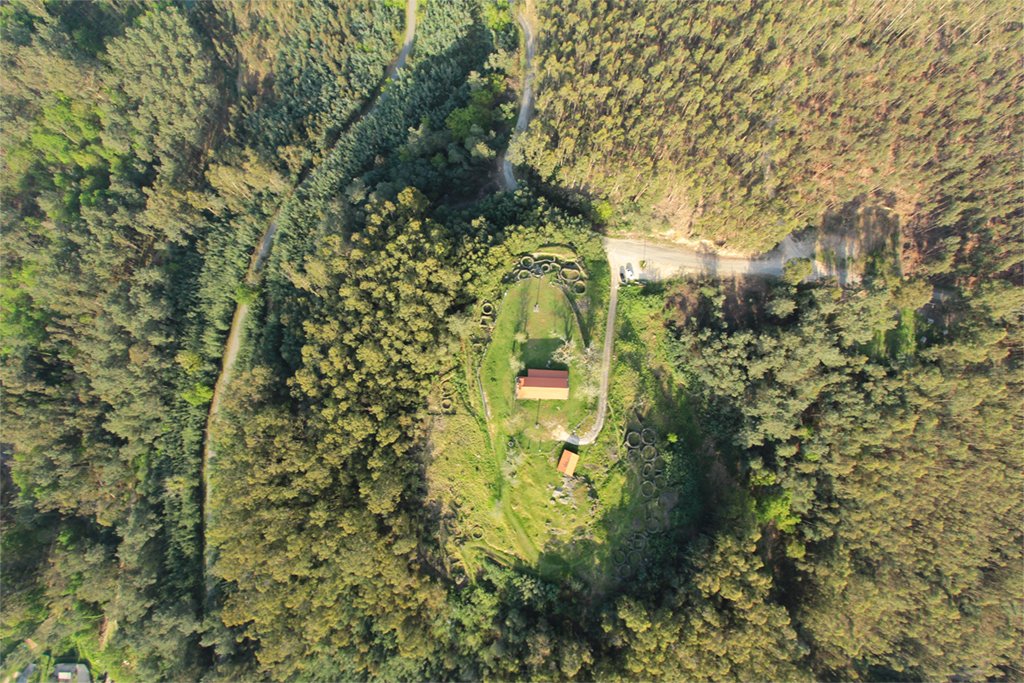