The president of the Deputación de Pontevedra, Carmela Silva, accompanied by the deputy of Environment and Ecological Transition, Iria Lamas, and the coordinator of SEO Birdlife in the province of Pontevedra, Gustavo Ferreiro, presented the 3rd edition of the programme “Voando nas Rías Baixas” (‘Flying in As Rías Baixas’). This programme will allow the public to know the ornithological richness of the province of Pontevedra for free through five guided routes. “The respect towards birdlife and the habitats where they develop is a very serious commitment for our government, and more so in this province, having so many wonderful natural spaces here”, declared the president.

Carmela Silva added that these activities “are an element to attract that nature-oriented, sustainable, environmentally friendly tourism that we want to support”. In that sense, “Voando nas Rías Baixas”, an initiative promoted in collaboration with SEO Birdlife, is in line with to the proposals launched by the Deputación de Pontevedra within the frame of their Plan Estratéxico de Turismo (‘Tourism Strategic Plan’) to internationalise and reduce tourism seasonality in the province of Pontevedra. The routes are aimed to “advertise the great potential of our province for birdwatching in outstanding locations and, at the same time, to make neighbours aware of the need to protect such spaces”, underlined President Silva. She also took advantage of the occasion to encourage people to sign up for the routes as soon as the registration period begins, saying that “they run out of places in less than 24 hours”. 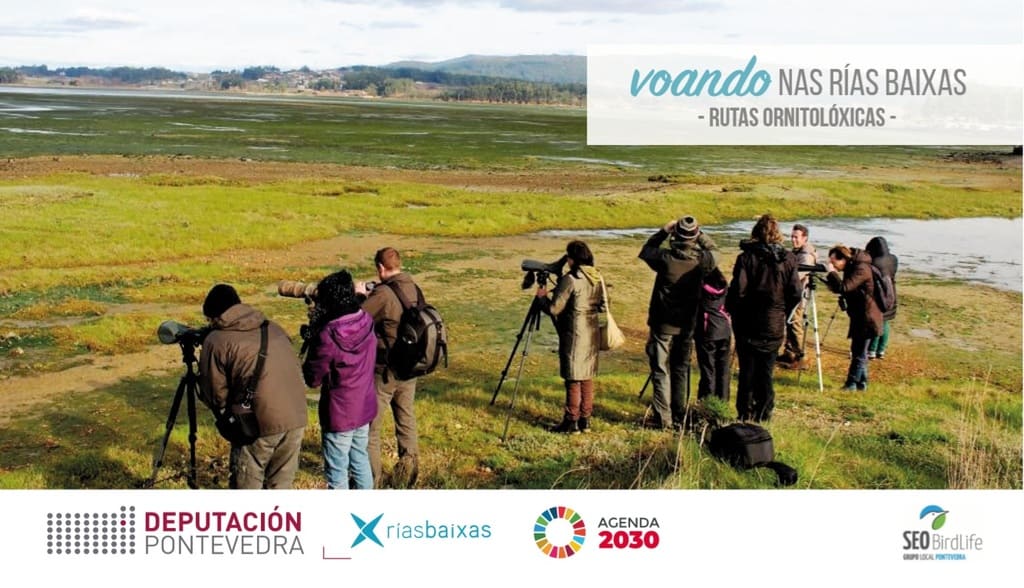 Gustavo Ferreiro, in turn, expressed his gratitude towards the Deputación de Pontevedra for supporting them, since “we were not working with any administrative body in Galicia until we started our partnership with the Deputación”. Ferreiro emphasised the government’s commitment with the environment and the contents of the programme, stating that “it allows us to raise awareness about nature and to get people to know, through birdlife exploration, environments adjacent to us with a very strong ecological value, making them realise the importance of preserving such spaces”. Five trips will be organised with a maximum of 25 participants, as President Silva declared. “The groups cannot be very large because wildlife spotting is a sensitive activity, and we must respect both the birds and their habitat”, she pointed out.

Individualized registration for each departure

The first trip is scheduled for January 26th to observe waterbirds and seabirds in A Enseada de San Simón, an inlet designated as a Special Protection Area (SPA) by the Natura 2000 Network. The registration period for this route opened last Monday, January 13th, and will be closed on January 22nd.

The second itinerary, taking place on February 16th, will go through the Umia-O Grove Intertidal Complex, another space protected by the Natura Network and the largest bird reserve in Spain. It also has been declared as a Wetland of International Importance and as a Site of Community Importance (SCI). To participate in this route, whose biggest attraction are the winter waterbirds living there, applicants must register between the 3rd and the 12th of February.

The third route will be on March 8th through the estuaries of the Miño River and the area of A Foz, in Ramallosa, both designated as SPAs by the Natura 2000 Network and with a wide variety of waterbirds. The registration period will be open from February 24th to March 4th.

The fourth excursion is programmed for May 31st in As Brañas de Xestoso, a meadow also protected by the Natura Network and hosting many birds of prey like the Montagu’s harrier, the hen harrier or the short-toed eagle. The registration period will be open from May 18th to 27th.

The fifth and last route will take place in Serra do Suído, a Galician mountain range, on June 21st. It will be dedicated to observe the big birds of prey, such as the griffon vulture, the booted eagle, the European honey-buzzard, the common buzzard or the short-toed eagle. To participate in this route, applicants will need to register between the 8th and the 17th of June.

Participants will be given birdwatching equipment in all five ornithological routes, along with SEO-Birdlife guides that will provide them with all the necessary information to locate the birds and recognise them by their features. Those interested in joining any of the itineraries proposed by “Voando nas Rías Baixas” will have to fill an application form available at the Deputación de Pontevedra website within the period specified above for each one of the routes.

The Deputación de Pontevedra will also have a stand in the Extremadura Birdwatching Fair (FIO) that will be held in Monfragüe National Park. The stand will be dedicated to travelling and natural tourism, promoting the birdwatching spots in our province and supporting a sustainable, seasonality-free tourism based on the conservation of our natural heritage. The Deputación stand will also hand out guides with the birds present in the province of Pontevedra.