A warm embrace
between sea and land

A mild climate and a summer that lasts until early October help to make it a destination to revisit, looking for those beaches that you missed in your last visit. The three rías (coastal inlets) in the province of Pontevedra make this coast a mirror from north to south, with neighbouring beaches, from where you can see the bateas, as well as fishing towns and villages.

Swimming in the Atlantic Ocean and seeing how the thickness of the sand or the type of dune plants vary depending on the coastal inlet. Here, you can choose between an urban environment full of services and a paradisiacal and unspoiled setting, where you can enjoy nature and the incomparable scenery of clear waters. And, finally, you can discover the benefits of the mild climate of As Rías Baixas, different than the cliché of "it always rains in Galicia", and enjoy the beach for much more than sun and bath... You could list as many reasons as beaches when you come to visit As Rías Baixas.

Map with the 58 beaches

Check here the location and characteristics of the 58 beaches of the province of Pontevedra with blue flags. 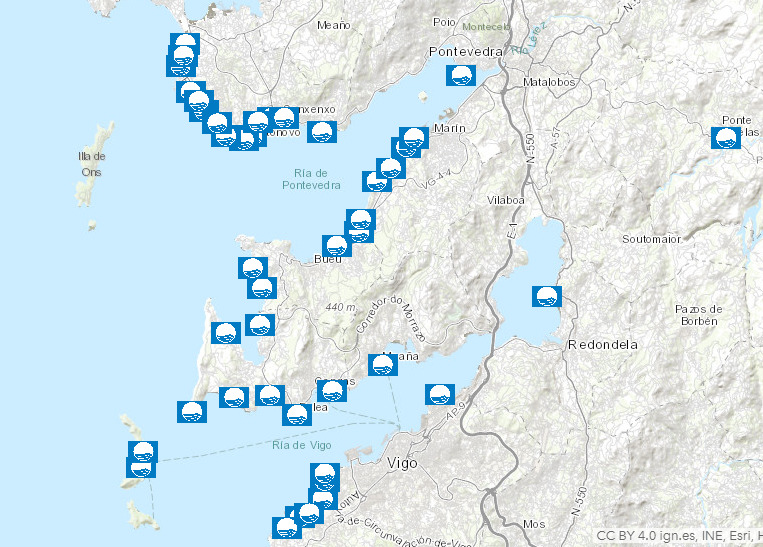 In the ría de Arousa the southern coast faces the neighbouring province of A Coruña, as the north side of the ría is part of this province. Here we find beaches such as Bamio or O Preguntoiro, close to the town of Vilagarcía de Arousa, or beaches with trees, in the nearby town of Vilanova de Arousa.

In the ría there is an island, A Illa de Arousa, whose coastline is a protected area included in the Natura Network. There, it is recommended to visit O Bao and Area da Secada Beach, where you can stroll around the place, see the dunes and stop at its singular pine woods. If you like kayaking or canoeing, there are adventure travel companies on the island that offer sport activities and sailing tours to Areoso Island, an unspoiled landscape with dune plants and white sand.

Further south, before reaching the Ría de Pontevedra, we find O Salnés Peninsula, one of the flagship destinations in As Rías Baixas. Promenades, walkways, legends and shrines can be found in the towns of O Grove and Sanxenxo. Rural areas such as Area das Pipas or Area Grande; semi-urban and large dune areas like Area da Cruz and Raeiros, or a landscape filled with the typical mussel breeding farms, so-called bateas, in Meixilloeira, are some of the options offered by O Grove.

In A Lanzada Beach, which is more than two kilometres long, on Saint John's Eve you can see the ritual of the nine waves, associated to fertility; the Romanesque Chapel of Our Lady of A Lanzada and the waves that attract both local and foreign surfers. The Canelas Beach, close to the village of Portonovo (Sanxenxo) and in the surroundings of Punta Cabicastro, a beautiful natural viewpoint which offers beautiful views over the Ría de Pontevedra.

Sanxenxo is the municipality with the largest number of Blue Flags (17) in As Rías Baixas, followed by Vigo (11) and Cangas (5). Close to A Lanzada, there is a small urban beach, O Espiñeiro, being 300 meters long.

Other urban and semi-urban beaches are Caneliñas and Baltar, located in the fishing village of Portonovo; A Lapa, Areas, Areas Gordas, Canelas and Panadeira; and the emblematic urban beach, Silgar, by the Sanxenxo promenade, a meeting place for regular visitors who come back summer after summer.

Among rural beaches, Sanxenxo offers the possibility to visit Paxariñas and Montalvo, surrounded by a landscape of cliffs and dunes, respectively, which are visited by people from the nearby campsites. Other dune beaches are Major and Pragueira, near Foxos, which are a paradise for surfers. What makes other beach, Bascuas, different from the rest, is the fact this is a nude beach. Wild, rocky and surrounded by a small cliff that runs down to the beach, this is also one of the busiest beaches in the municipality. Bascuas and Foxos were also awarded with the blue flag.

In the Ría de Pontevedra the municipality of Poio has a beach with a blue flag: Cabeceira, which is semi-urban

Their landscapes, cuisine and local traditions are among the main attractions of the municipalities of Marín, Bueu, Cangas and Moaña, all of them in O Morrazo Peninsula.

The beaches of Marín are ideally situated in the southern coast of the ría de Pontevedra. Furthermore, the sandy areas of Portocelo, Mogor, Aguete and Loira have the Blue Flag certification, as well as O Santo Beach - A Coviña, which was awarded in 2015. Its fine sandy beaches with calm waters are very popular, and thousands of bathers go there attracted by the beauty and the quality of its waters every summer.

In Bueu you can find a hidden beach, Lapamán, before reaching Portomaior Beach. Close to the Ría de Aldán, among others, you can find the beaches of Area de Bon and Lagos, both with a blue flag. From the beaches of this town we can see the Ons Island, which can be reached by boat from Bueu or Sanxenxo. This island has beaches protected from the wind and facing the Ría, such as Canexol, Area dos Cans and the heavenly Melide Beach.

On the coast of Cangas we find the largest number of beaches, a total of 38 - without counting the coves -, of which five of them were awarded with the blue flag. In the Ría de Aldán the beaches Menduíña, Areacova or Areabrava are worth visiting, as well as idyllic coves like Pipín or Castiñeiras.

In the Ría de Vigo, the protected areas of Cabo Home and Costa da Vela have also unique beaches of recognised landscape value, like Melide, from where it seems that we are about to touch Cíes Islands, or Barra, considered the best nude beach Galicia. Nerga, Menduiña, Areamilla, Areabrava and Liméns are the Blue Flag beaches located in the town of Cangas. This flag also flies in the municipality of Moaña, in O Con Beach.

Although Vigo is mainly known for being a commercial and an industrial city, eleven of its beaches were awarded with the blue flag in 2022. Some of them small, like A Punta or O Tombo do Gato, and also wide sandy beaches like O Vao, that are very popular among the Vigo population, as well as the Vigo urban beach par excellence, Samil, more than one kilometre long, with a bustling promenade full of life since the first sunny days of winter, and with restaurants, gardens, playgrounds, surrounding pine forests and small beaches. You will find it impossible not to stop there to see the sunset with views to the Cies Islands.

If you decide to visit these islands, Rodas Beach will be present in most of the images that will stay in your memory, and if you want to take a stroll around the island and follow any of the routes in the archipelago you will discover other beautiful beaches and coves, such as Figueras, Nosa Señora or Areíña, hidden behind pine trees and protected by cliffs. In the town of Vigo you can visit other popular beaches, such as Argazada, Fortiñón, Canido or A Fontaíña.

Val Miñor is another ideal destination with plenty of beaches. In the municipality of Nigrán you can surf in Patos or stroll along the two kilometers of the beaches Playa America and Panxón. On the other side of the bay is the town of Baiona, with several beaches along its promenade, and Monterreal Peninsula, where the luxury hotel Parador is located.

Leaving the stunning Ladeira Beach, we find small family-friendly beaches surrounded by a nautical landscape. This is the case of A Barbeira Beach, close to the marina, with warm and clear waters. The southernmost beach in Baiona, A Concheira, is famous for the quality of its spring waters. Here it is common to see the old local people taking a bath; no matter it is summer or winter. You can also be seduced by Santa Marta, A Ribeira and Os Frades.

If you take the road to the south coast you will reach the natural border with Portugal, the Miño River in the town of A Guarda. The famous beaches of Area Grande and O Muíño were awarded with the blue flag in 2022. The latter is a long stretch of sand with dunes that are being recovered and low-salinity water, since it is found at the mouth of the river, and an islet called A Ínsua, where there is a small fort, that witnessed the ancient wars between Galician and Portuguese people.