Xenerais, madamas and galáns, the Meco, the parrot Ravachol, the sardiñas or sardines, the Momo… As Rías Baixas plunge into the carnival season with hundreds of festivities, carnival parades and enterros (carnival burials). Every Entroido is different. The city of Pontevedra celebrates the burial of their famous historical parrot Ravachol, whereas the city of Vigo executes the Meco, a puppet representing the pagan god of carnival. The town of Cangas sacrifices the Momo, a fish that ends up consumed by the flames.

Traditional music bands like troupes, and charanga bands parade through the streets of Rías Baixas with their music, dances and humour, suitable for all audiences. Traditional cuisine is also a must during this season. The cocido (Galician stew) and the lacón con grelos (pork shoulder with turnip tops) are the kings of the table. Other typical delicacies which can be tasted at this time of the year are the filloas (Galician crepes) and the orellas (a typical Galician Carnival dessert similar to a funnel cake). Here are some of the essential carnival celebrations in Rías Baixas:

The traditional Entroido de Cobres, which dates back to the 18th century according to some written documents of the time, was declared a Festival of Tourist Interest in Galicia. Madamas and galáns, dressed in colorful costumes, and other people in white perform dances to the rhythm of a charanga. The dress of the madamas, women of high-class, consists of a peitoril full of chains and other metallic adornments, a blouse and a white skirt, both adorned with coloured ribbons and various trimmings, black shoes and a large hat with flowers and other decorative elements. 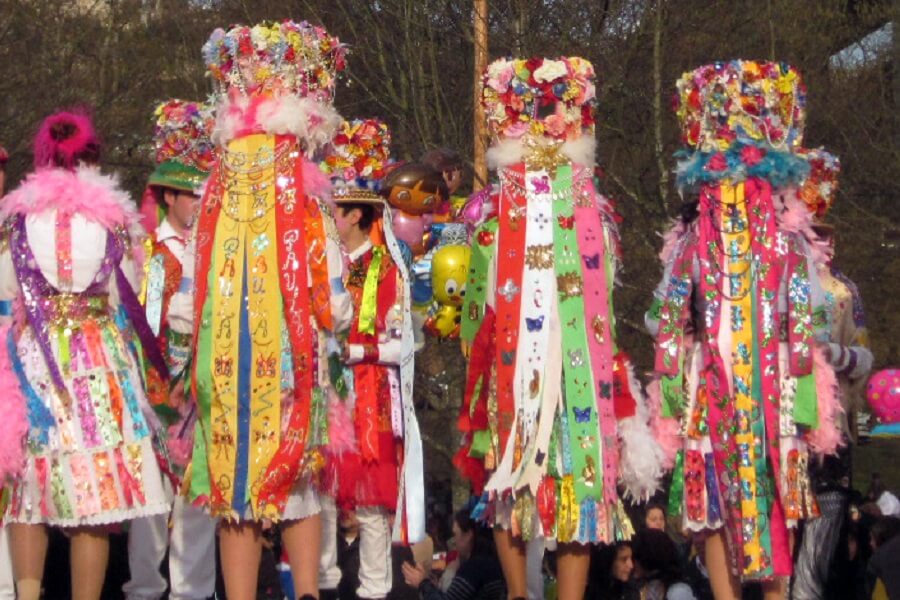 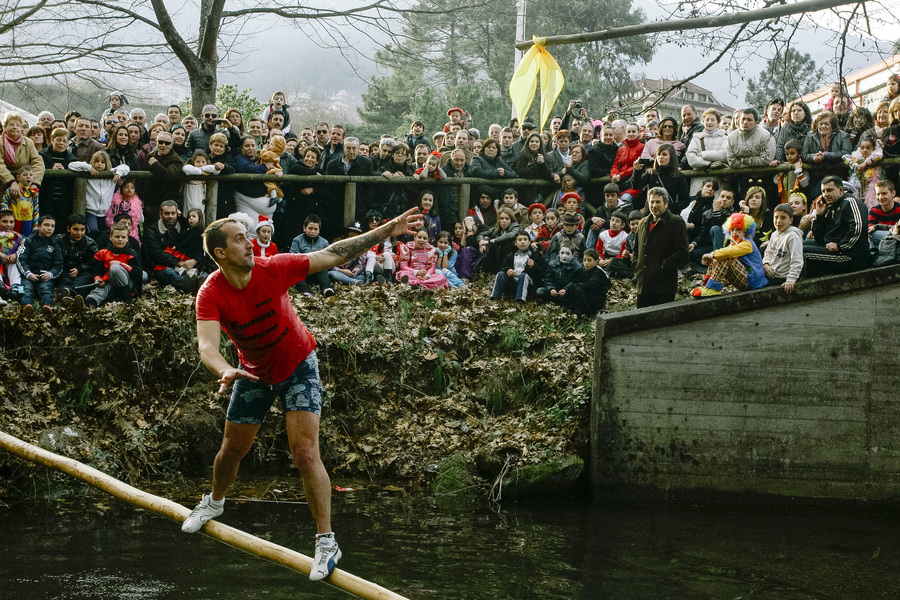 Galáns , men of high social status looking for a partner amongst the madamas, wear a white shirt with coloured ribbons, a red tie, a silk scarf around the waist down to the knees, white trousers, black shoes and a hat with flowers similar to the one worn by the madamas.

On Carnival Tuesday, a local holiday in Vilaboa, one of the most awaited moments of the festival takes place: the Corrida do Galo (Rooster Run).

The manufacturing process of the coloured costumes of the Xenerais da Ulla lasts for weeks. These horsemen, which take part in one of the most traditional carnival celebrations in Galicia, ride through the towns of Vila de Cruces, A Estrada and Silleda, all of them by the Ulla River. This colourful and creative carnival event bears the distinction of Festival of Tourist Interest in Galicia. 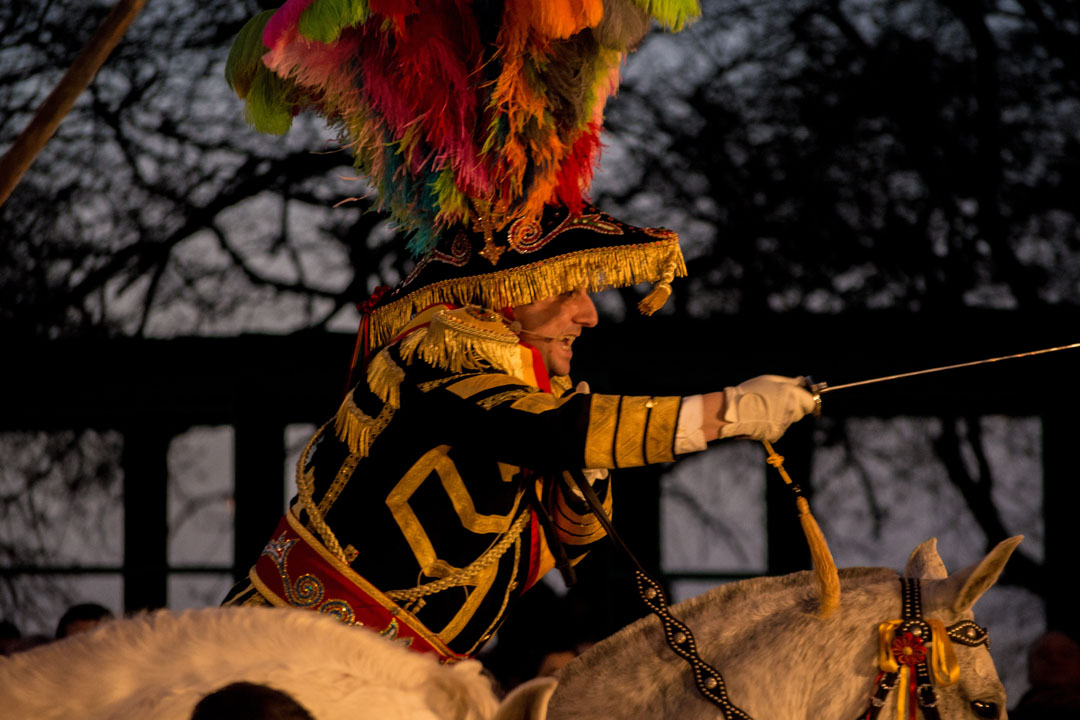 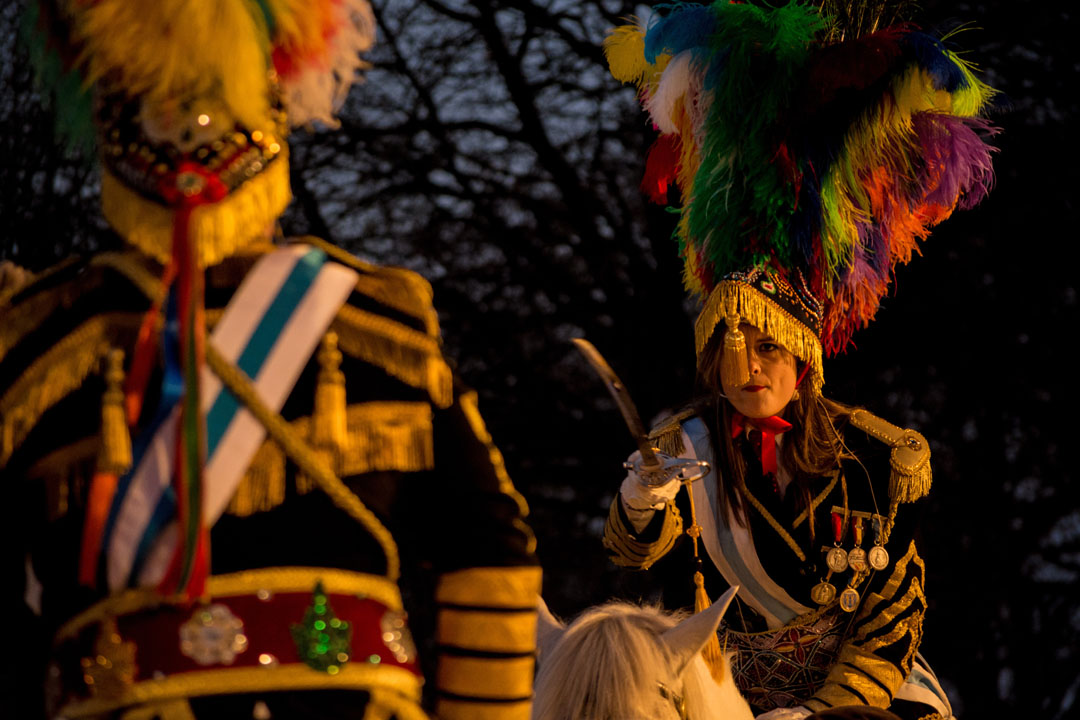 The xenerais and correos are the highlight of the festival. They ride on horseback around the villages chanting vivas, followed by the comparsas (carnaval troupes) and coros (young boys and girls and elderly people). The xenerais recite real verbal battles where they spare no one: current political and love affairs or local news make people burst out laughing.

Over a week, the traditional carnival festival in Pontevedra, the capital of the province, attracts many visitors eager to participate in the large number of activities. King Urco's parade through the streets announces the start of the festivities. Parades that fill the most emblematic streets of Pontevedra with colour and music, costume and filloa contests, culinary days, parody events in different points of the city, the pirate landing and the murga (band of street musicians) contest are the perfect prelude to the most important carnival event in Pontevedra, the burial of the parrot Ravachol, so-called Enterro do Ravachol. 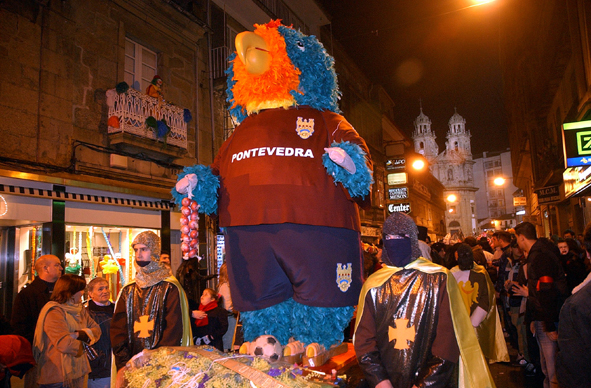 Ravachol was a parrot who used to live in the former pharmacy next to A Peregrina Church. Today, in the same place a statue pays tribute to the famous parrot. The owner of the pharmacy, Perfecto Feijoo, an educated man and a regular participant in gatherings together with Unamuno and Ortega y Gasset, always scolded the parrot for its bad language and insolence . The death of this beloved bird and its curious mass burial have been re-enacted in an original and amusing way since 1985.

In the seaside town of Bueu, in the O Morrazo Peninsula, the closing of the carnival celebrations takes place on Carnival Sunday, with the burial of another bird, the so-called Paxaro de Mal Agoiro (bird of ill omen).

Burial of the Meco (Vigo)

During Carnival, the city of Vigo crowns the god of Carnival, the Meco, who is executed a few days later. This pagan god is represented by a puppet that each year takes the form of a character or an element of current affairs. Street bands and a large number of activities create a friendly atmosphere at the most emblematic squares of the city.

The rude merdeiros, other outstanding characters of this celebration, run, shout and jump in order to scare the people attending the celebration. Armed with a stick, they try to hit the people they meet. More than a decade ago, these traditional characters, banned in the 1920s, were retrieved. 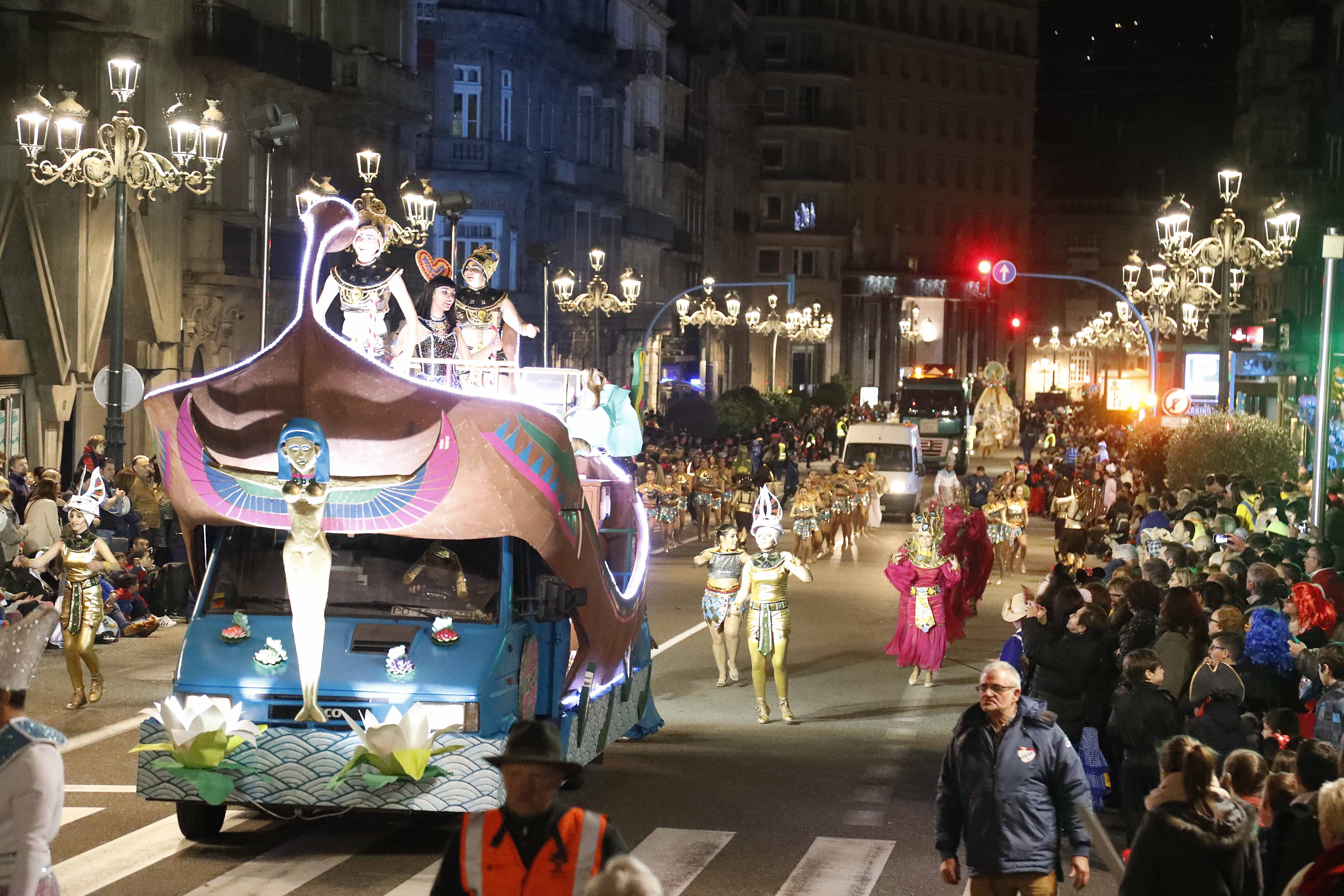 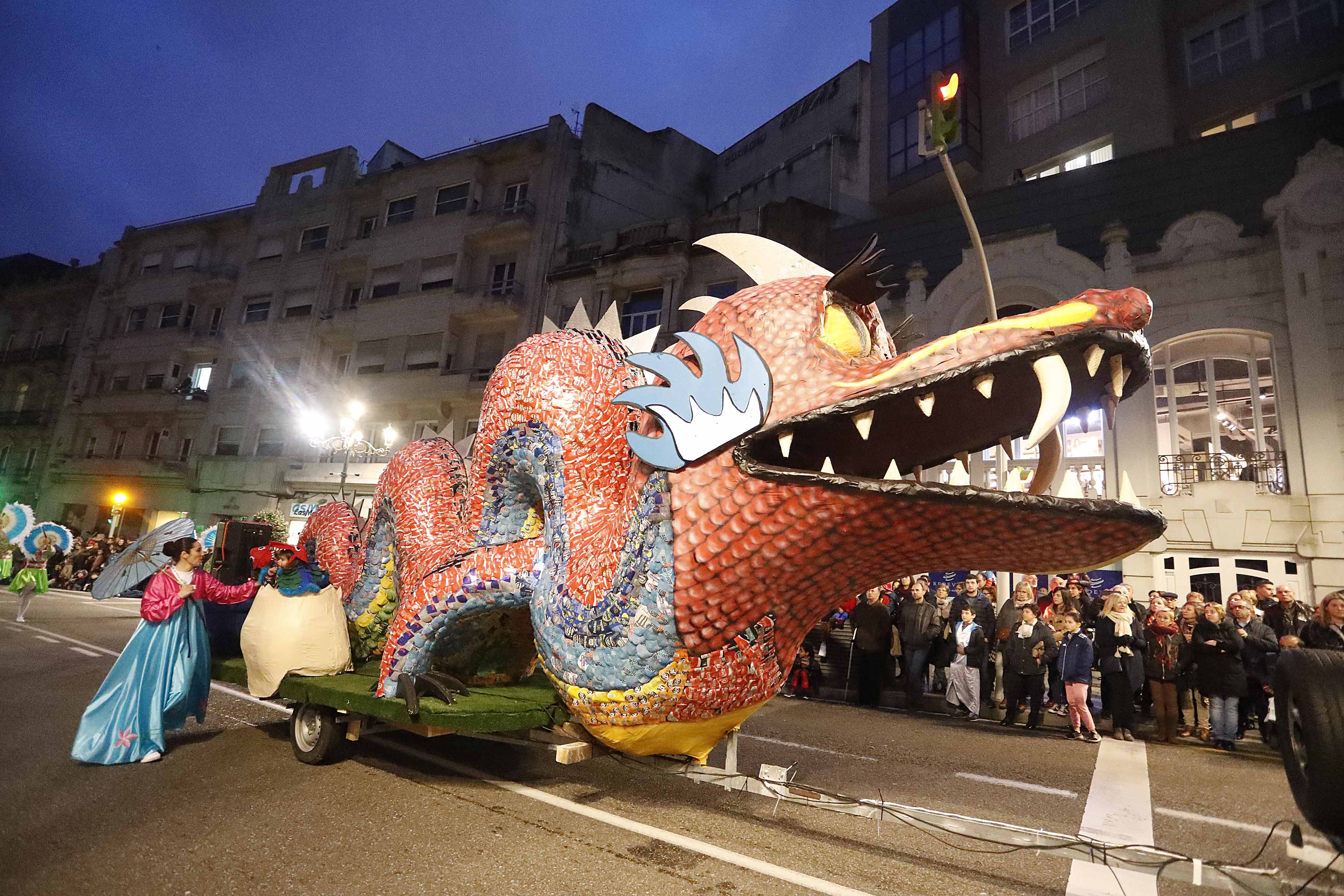 In the past, dressing as a merdeiro was a common practice among the city's sailors. This character, who represents the existing rivalry between sailors and farmers, rubs their victims with rotten fish remains.

Finally, the unfortunate Meco is mourned and burnt on Tuesday night at Porta do Sol. Close to Vigo, the municipality of Redondela also worships the Meco, who suffers the same fate as the one in Vigo. Other examples in As Rías Baixas are O Liborio, in the town of A Illa de Arousa, a puppet that takes on a different form each year and represents a celebrity who ends up being burned at the stake; and O Chapante, who is the main character of the Carnival of the town of Cuntis.

The towns of Moaña, Baiona, Caldas de Reis, Marín, Cambados, O Grove and Ponteareas are some of the municipalities that celebrate the burial of the sardine. This celebration undergoes variations in other places of the province, which give different names to the fish that ends up consumed by the flames. Momo, in Cangas do Morrazo and Vilanova de Arousa, O Berete, in Chapela (Redondela), or Kiko, in Nigrán, among others. In the town of Cangas, people can enjoy the dances performed by the damas and galáns, who participate in the traditional Dances of Darbo, held in September and designated as Festival of Tourist Interest. 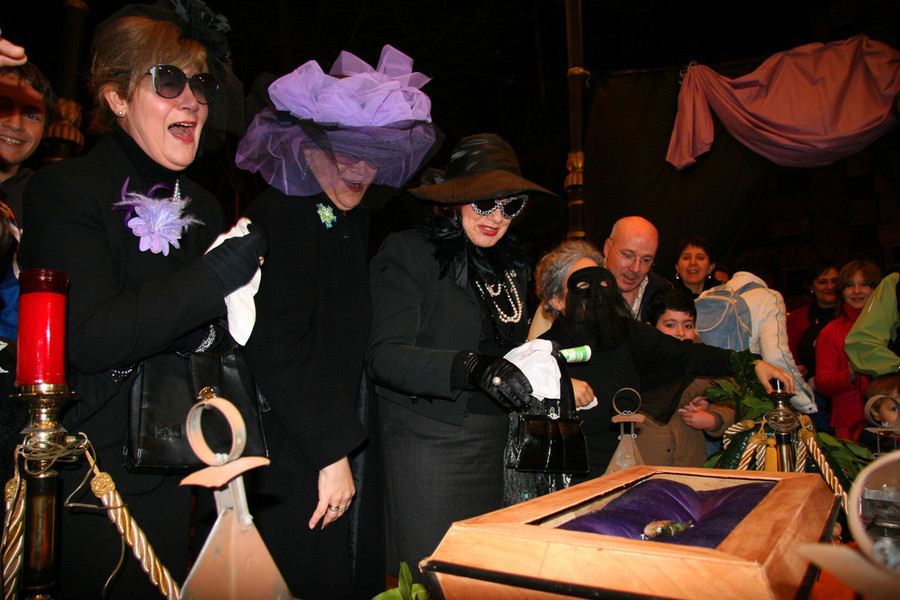 Other towns and villages by the Miño River, instead of the sardine, choose other freshwater specimens, as is the case of the place of Goián (Tomiño), with the Burial of Enterro da Taíña (burial of the mullet); or the town of Salvaterra de Miño, with the Enterro da Lamprea (burial of the lamprey).

The Carnival in O Grove has self-declared itself as Festival of International Festive Interest. This entertaining event in the seafood town par excellence opens with a tasting of the best local dishes at the dinner Cea de Comadres and Compadres, a warm up event before the Domingo Fareleiro, which takes place on Carnival Sunday. 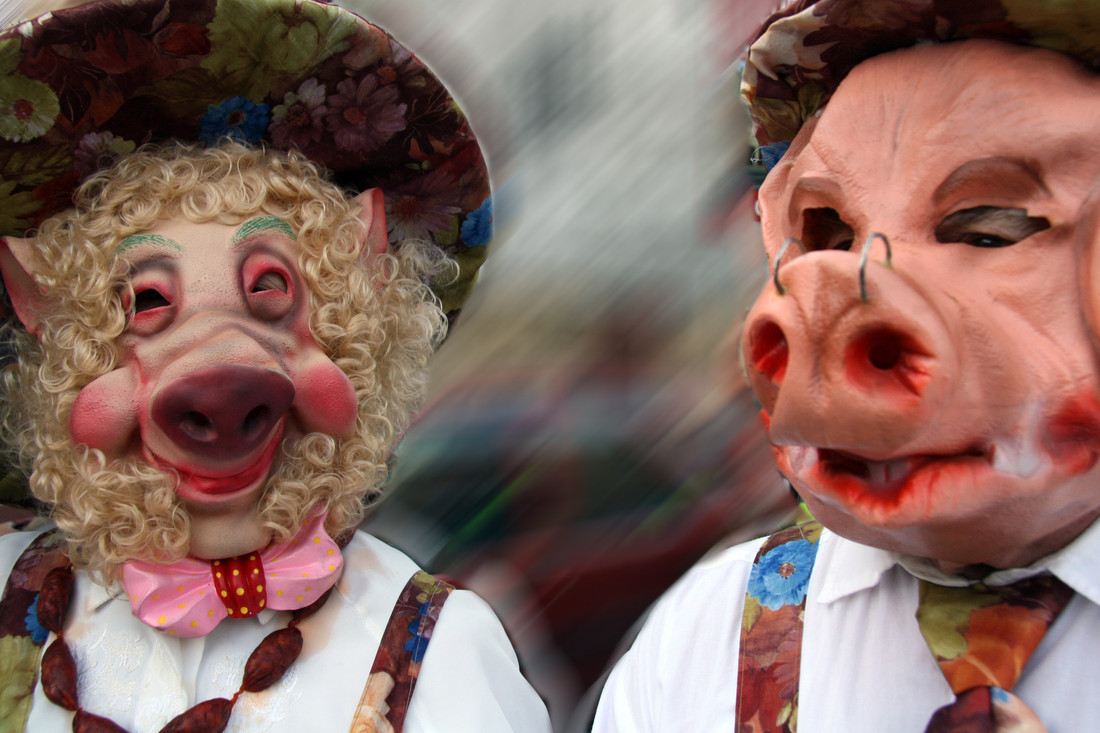 The fareleiros throw flour to the enfariñados, who are chased by the former ones. All participants in the struggle end up covered in flour.

The most important celebration of the carnival in O Grove is the Festival de Comparsas, bands that satirise the events of the last year with their music, dances and performances. The parade takes place on Carnival Sunday and passes through the streets of this seaside town. The burial of the sardine in the pier of O Corgo gives the grand finale to the Carnival celebration.

A parrot with its own name, horseriders who spare no one with their satirical songs, the Meco, representing a different celebrity each year, the madamas and galáns, and the burials of the sardine, are in the spotlight during the carnival season in the province of Pontevedra.

The foul-mouthed parrot Ravachol from Pontevedra has won the affection of the locals, who go en masse to its burial. The massive funeral of this peculiar pet took place in the 80s and coincided precisely with Carnival, and it has been celebrated at this time of the year ever since.

Like the Horsemen of the Apocalypse, every year the Xenerais da Ulla ride the streets of some of the towns by the Ulla River. In an amusing way, these characters talk about current issues related to politics, society or love, in front of an audience that double up with laughter. One can also enjoy the dances of the madamas and galáns in the purest traditional style in the Entroido de Cobres.

As a grand finale to this festive and entertaining season, burials are celebrated throughout different villages and towns with the burning of characters such as the Meco, representing a different celebrity each year, or the sardine, the fish that is traditionally buried in As Rías Baixas, a destination that has been always linked to the sea.