In Galicia, the Coastal Way has its starting point in the estuary of the Miño River, and runs along the coast to the inland part of the Ría de Vigo, where it meets the traditional Portuguese Way. This coastal route, from the town of A Guarda up to Redondela, offers stunnings landscapes of beaches, cliffs, coves, inlets, woods and river paths. Here, you will discover a rich archaeological heritage, churches, Galician manor houses popularly known as pazos; you will stroll around beautiful old towns; and will enjoy its local cuisine, culture and festivals.

The castro (Pre-Roman hillfort) of Santa Trega welcomes pilgrims on their way to the town of Santiago de Compostela. Departing from the estuary of the Miño River, the Coastal Way overlooks the Atlantic Ocean, the Cíes Islands and the Vigo estuary, which will allow visitors to experience first-hand the seaside and wine culture of As Rías Baixas.

The sea will be your companion on the first part of your route, until you meet the central Portuguese Way. Enjoy this itinerary, which is official since 2016, scented with a salty aroma, and discover the magic of the Rías Baixas coast.

The River Miño's cross-border estuary is a site of extraordinary natural interest, with a great biological diversity. One of its highlights is its riverbank forest, unparalleled in Galicia, where we can see alders, willows, oaks, ashes, black poplars, elms, birches and laurel trees. In addition, visitors can sight over fifty different species of aquatic birds native to central and northern Europe.

The stop at A Guarda allows us to enjoy the view of the typical seaside houses, colourful and narrow, and we can take a leisurely stroll around the port. The Praza do Reloxo and the Church of Santa María are two points of interest that you should not miss on a visit to this town.

The Santa Trega Hill dominates the estuary. At the top is the most important Protohistoric archaeological settlement in Galicia, with its characteristic round constructions. The citania (a type of settlement that is bigger than a castro) dates back to the 4th century BC and it bears witness to Pre-Roman trade. The view of the scenery from the top of the mountain makes it worth climbing, with the river estuary, the town of A Guarda, the Atlantic Ocean and the beach of A Foz, in Caminha, at your feet. A truly unique image.

We will go down to the beaches of Fedorento and Area Grande, where archaeological sites have been found featuring a wide variety of tools crafted by the old settlers. We will continue on our way to the municipality of O Rosal, well-known for its wines under the Designation of Origin Rías Baixas. We pass by the cliffs where the ocean waves break at our feet, and enjoy a panorama of great beauty, where sea birds can be sighted all year round. 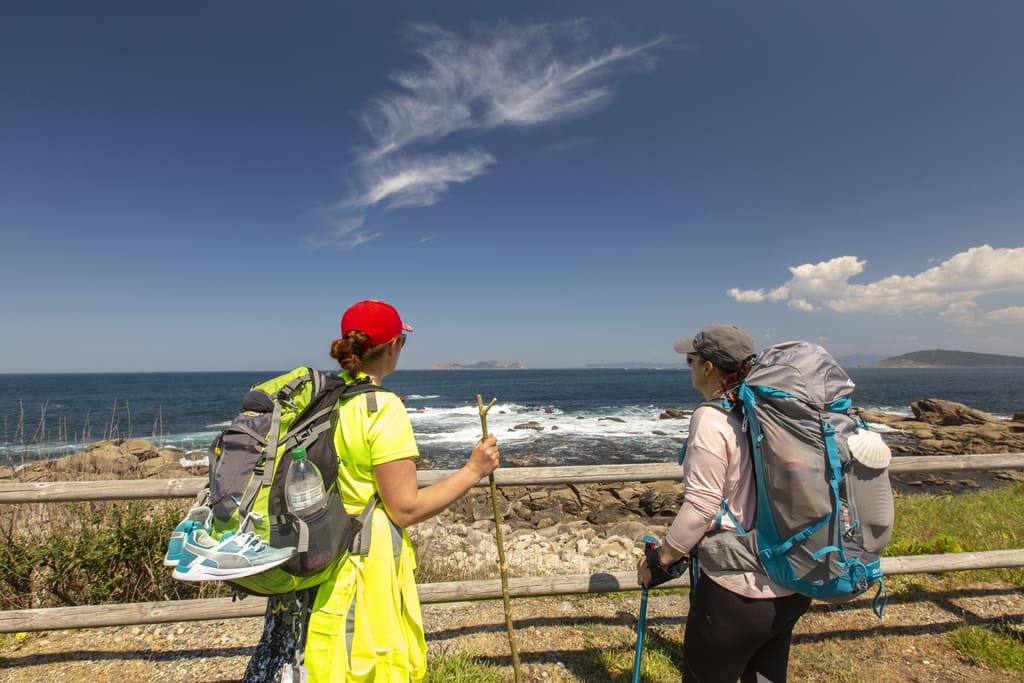 In O Rosal we can take the route that passes by the mills of O Picón and O Folón, recognised as Heritage of Cultural Interest.

Our next stop is Oia, the third municipality of the Way in Galicia. One of the must stops here is the Royal Monastery of Santa María de Oia. Located by the Atlantic Ocean, its origin dates back to 1137 under the protection of Alphonso VII of Castile, and, throughout its history, until 1835, it was governed by 140 abbots.

The stage concludes in Mougás. We can highlight the port, where we can admire a beautiful rocky area. The place also attracts surfers due to its waves, suitable for this sport.

A few kilometres away from Mougás we find A Cabeciña, an archaeological site with a history of over 4,000 years formed by petroglyphs and a castro with monumental defensive structures and impressive views of the Atlantic Ocean. Its original rock engravings are unique in Galicia.

The A Groba Mountain Range stretches along the Atlantic coast. From there, we admire the mouth of the ría (coastal inlet) of Vigo, with the Cíes Islands, a natural gem that is part of the National Maritime-Terrestrial Park of the Atlantic Islands of Galicia.

We leave Mougás, in Santa María de Oia, on our way to Baiona, a beautiful municipality with a magnificent old town and a great tourist influx. Exactly on the border, still in Oia, stands the lighthouse of Cape Silleiro, marking the entrance to the ría (coastal inlet) of Vigo.

A particularly significant event in the long and rich history of Baiona is the arrival of the caravel Pinta at its port in 1493, making Baiona the first place in Europe to hear about the Discovery of America.

The old town was declared a Historic-Artistic Site, and some of its major attractions include the Chapel of Santa Liberata; the old Collegiate Church of Santa María, built between the 12th and the 14th centuries in the Romanesque style, with Cistercian influences; the Sancti Spiritus Hospital; the fountains of Ceta and Pombal; and the cruceiro da Santísima Trinidade (a stone cross honouring the Holy Trinity).

Emphasis must be placed on the fortress located on the Monterreal Peninsula. Its 18 hectares are surrounded by three kilometres of crenelated walls built between the 11th and the 17th centuries. You can enjoy splendid views of the Cíes Islands from the fortress and its surrounding area. 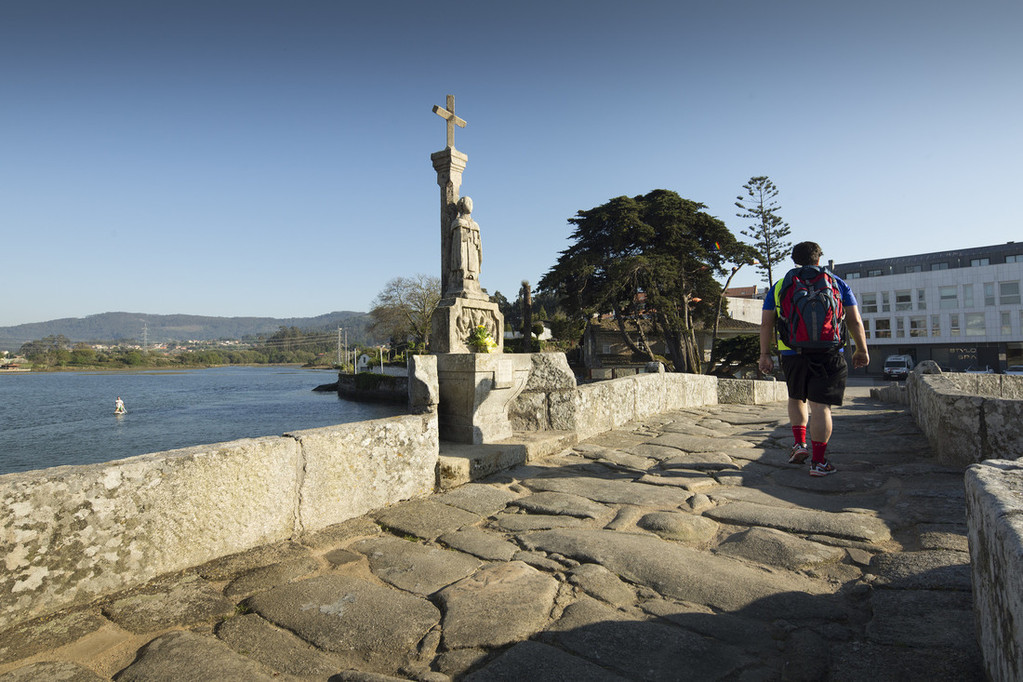 We continue our journey to Nigrán, the next town on the Way. The Romanesque bridge of A Ramallosa, linking Baiona and Nigrán, was built at the mouth of the Miñor River in the 13th century. In the middle of it we can see a cruceiro (stone cross) with a peto de ánimas (a stonework construction representing souls in Purgatory) and an image of San Telmo.

Other major attractions are the church and the noble manor Pazo de Cadaval. As we cross the bridge of A Ramallosa, we can see a marsh stretching out before our eyes. This stage of the journey will conclude at the Pazo de Pías or hostel As Damas Apostólicas. Now it is time to have a good rest before we continue our route. Tomorrow we will head to the city of Vigo.

The pazos are one of the many appeals of this route along the Atlantic and As Rías Baixas coasts. In the route we will pass the Pazo de Cadaval-Urzaiz, declared Heritage of Cultural Interest, and whose origins date back to the 14th century. This manor house is surrounded by beautiful gardens.

Another pazo that we can find in the route is the Pazo de Cea, also in the municipality of Nigrán, built in the 16th century and declared Historic Monument and Heritage of Cultural Interest.

Nigrán is notable for its sandy areas, including the most recognised ones such as A Praia América, Panxón and Patos, where thousands of bathers go during summer in order to enjoy their leisure time. Furthermore, Patos is greatly valued by the enthusiasts of nautical sports because it is suitable for all disciplines such as surfing or windsurfing. 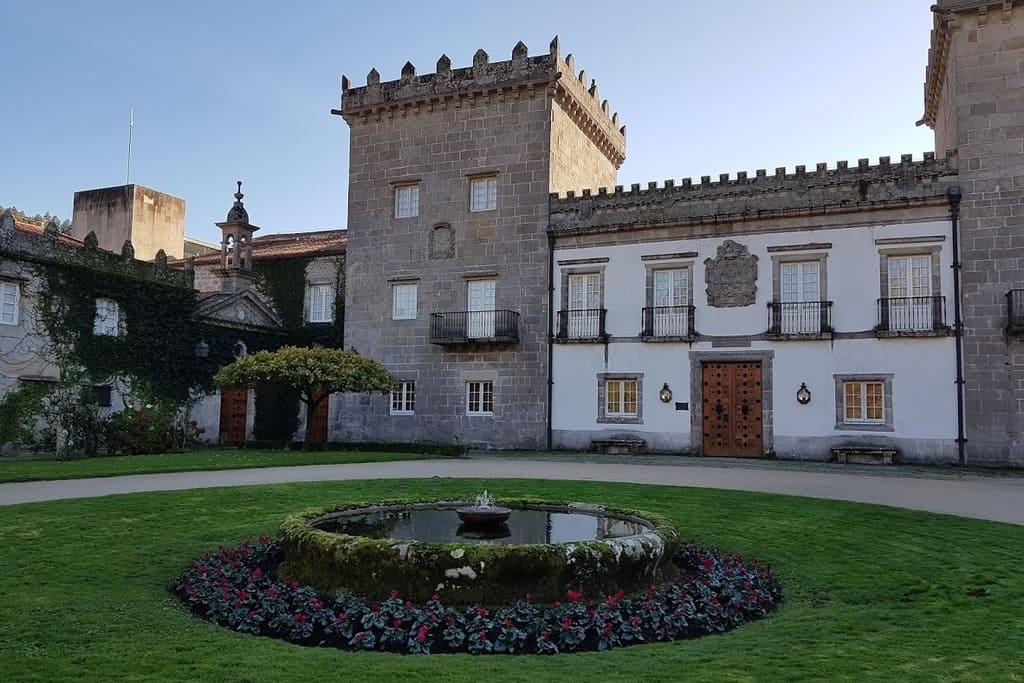 Our steps will lead us to Vigo, the largest city in Galicia, walking along the route of the River Lagares, the main river of Vigo. Its course leads us to Castrelos, a beautiful park, the largest in the city and the perfect place to take a break. Do not miss the Pazo de Quiñones de León at the top of the park. This pazo houses the museum of the city with a collection rich in archaeology, sculpture, drawing, pottery and painting from various schools and decorative arts.

The building has its origin in the old Pazo de Lavandeira, built around 1670. Its Baroque and French-influenced gardens at the back of the building date back to the 19th century. Its labyrinthine myrtle hedges and the rose garden stand out. The English garden is located at the bottom, also known as "pradeira do té" (tea meadow) and boasts a great number of ornamental and exotic plant species.

We end the day in the Church of Inmaculada Concepción (also called "church of the peaks" because of its peak-shaped roof), inspired by Le Corbusier.

A good way to start this stage of the way is stroll around the old town of Vigo and enjoy its lively atmosphere.

There you can visit the Co-cathedral of Santa María, the main temple of the city, which harbours the image of the Cristo da Victoria (Christ of Victory), a religious symbol in Vigo. Every year, on the first Sunday of August, the procession of the Christ attracts tens of thousands of people.

A Porta do Sol Square , halfway between the upper and lower part of the historic centre, is one of the hubs of the city. This square is at the beginning of O Príncipe Street, the commercial golden mile in Vigo, and close to the ensanche, which is the peripheral housing development area that has been progressively growing since the late 19th century. There, we can admire majestic buildings by different schools of architecture.

Vigo offers wonderful panoramic views to the sea. Afonso XII Boulevard has some of the best views in the city; it is 500 metres (1640 feet) away from A Porta do Sol Square, and the magnificent Fortress of O Castro. From there, you will see the port at your feet, one of the most growing ports in Europe, with the Cíes Islands in the background and the Peninsula of O Morrazo in front of you, with excellent beaches. 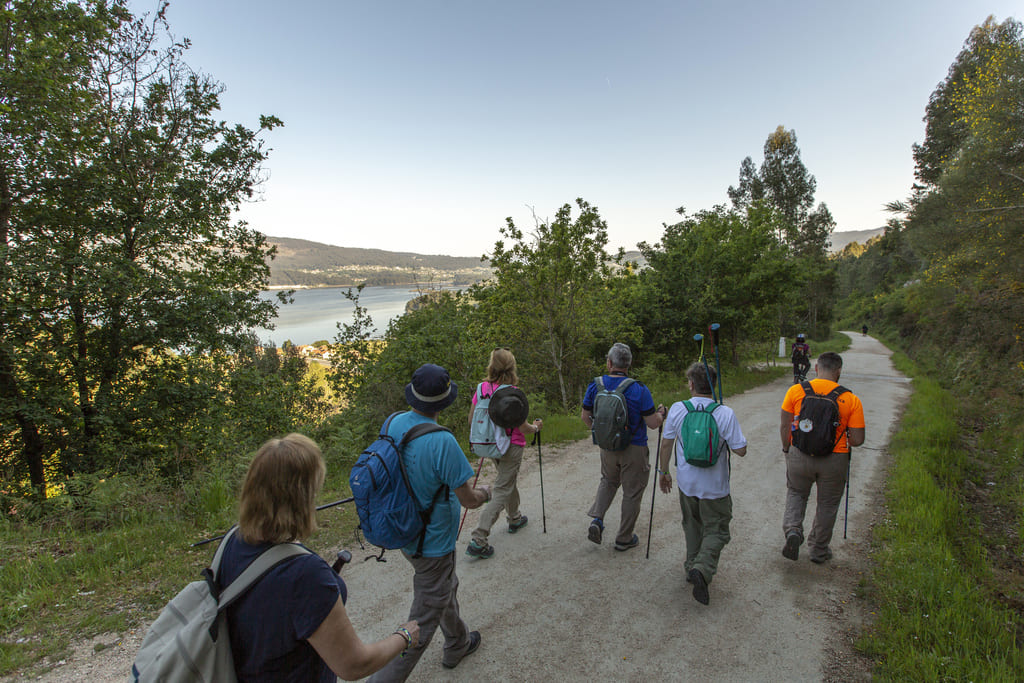 We leave Vigo via the so-called Ruta da Auga (Water Route), providing magnificent panoramic views and with a rich natural diversity. We will continue towards Rande, the setting of an epic naval battle that took place on 23 October 1702 between the Spanish-French fleet and the Anglo-Dutch fleet, which was the victor of the battle. These events gave rise to legends about hidden treasures in the waters of the ría.

We will go deep into the cove of San Simón, an area classified as a Site of Community Importance and rich in aquatic birds. This cove is also notable for farming bivalves, of which oysters are the main delicacy.

Facing the coast emerges the San Simón Island. Throughout its history, it has been a monastery, a concentration camp, a lazaretto and a school for orphans of sailors.

In the town of Redondela, pilgrims find a rich civil and religious heritage. Good examples of this are the Pazo de Torrecedeira, a noble manor built in the 17th century, and the Church of Santo Andrés de Cedeira, built in the Baroque style and dating back to the 18th century.

The Bronze Age left a rich heritage of archaeological sites, from petroglyphs to funerary complexes and rock carvings in Redondela. The village gained importance thanks to the Romanisation and that is why the Way of Santiago became more important during the Middle Ages. Railway viaducts are characteristic of Redondela, and the town has a beautiful historic centre.