The Portuguese Way to Santiago de Compostela has brought about important social, economic and cultural ties between Galicia and Portugal since the 12th century. The traditional route arrives in As Rías Baixas passing through Tui, after crossing the Portuguese town of Valença, and continues from O Porriño towards Redondela, Pontevedra, Caldas de Reis and Pontecesures, running through fourteen towns. From the borderline between Spain and Portugal, marked by the Miño River, to Santiago de Compostela, pilgrims walk 120 km (93 km in the province of Pontevedra).

Rivers, natural spaces, protected historic old towns, such as those in Tui or Pontevedra, islands, spring waters, woods and cascades are part of this beautiful route of moderate difficulty. In 2016, it was the second busier path of the official ones, with more than 52,000 pilgrims and had the highest growth rate: 20 %. More than half of these travellers are foreigners, proof of the international projection of the Portuguese Way. It can be done in five stages: 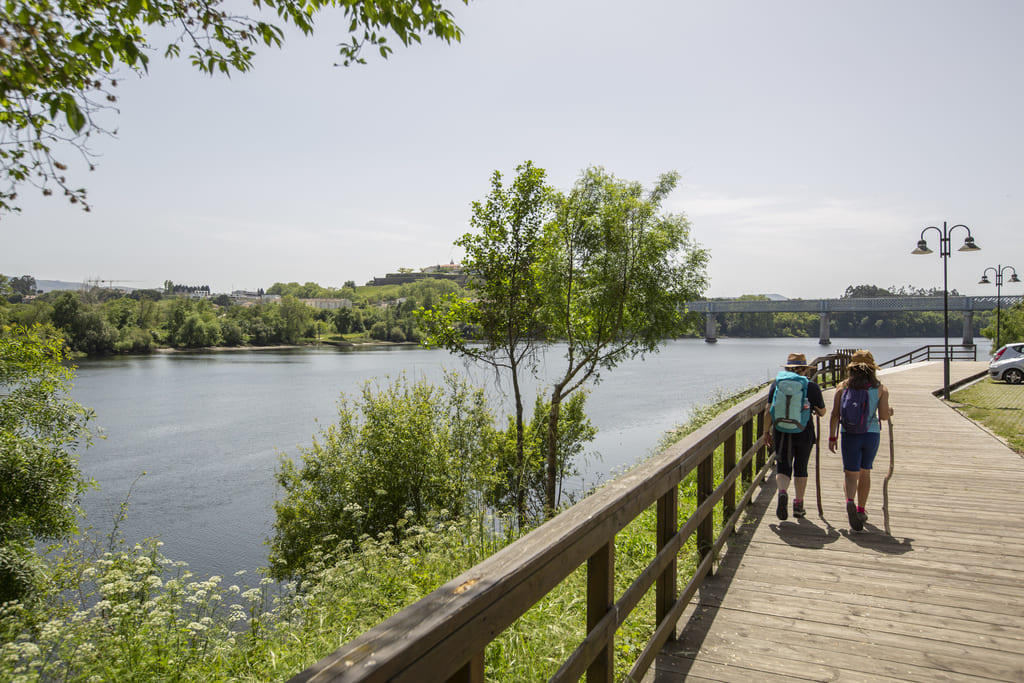 The route begins on the international bridge in Tui, a town rich in history and with an impressive historic centre. This town was once one of the seven capitals of the old Kingdom of Galicia. A stroll around its historic centre is a must, especially Santa María Cathedral, built in the 12th century with a Romanesque building and a Gothic façade, which is worth a visit. Other important religious monuments are the chapels of San Telmo and the Misericordia, the churches of San Francisco and San Bartolomé and the convents of Clarisas and Santo Domingo.

Part of the history of Tui has been linked to the Way of Saint James. In fact, there was a pilgrims' hospital (now a Diocesan museum with wonderful religious and archaeological collections), and there, you can find the Virxe do Camiño Chapel and As Febres Bridge. 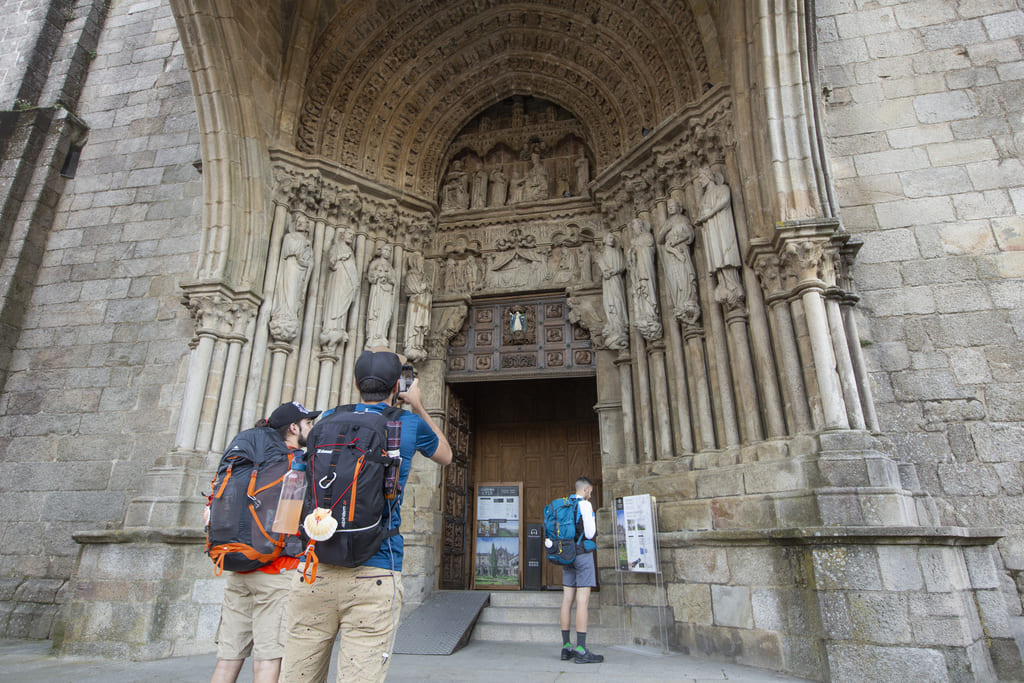 In Tui, if you have enough time, you should visit the Aloia Hill, the first one in Galicia to be declared Natural Park, in 1978. It is 700 metres high and has a great variety of plant species, among which the native forests and exotic centennial trees stand out.

Then, you head to the north. The Way crosses the medieval bridge A Veiga, over the Louro River. The Virxe do Camiño Chapel is a little farther on the route.

You enter the parish of Santa Comba de Ribadelouro and you find a calvary with five cruceiros (stone crosses). Then, you walk through the town of O Porriño. On the old Royal Road to Vigo there is another magnificent cruceiro. The route passes by the San Carpio Chapel and the manor house Quinta do Adro.

In O Porriño you can visit the chapels of San Sebastián or San Benito, the Santa María Church or the town hall, designed by the architect Antonio Palacios.

This stage begins in O Porriño. You head towards the town of Mos, where the Baroque Santa Eulalia Church and the 17th century pazo stand out.

A steep slope drives you to the cruceiro Os Cabaleiros, built in the 18th century, also known as the cruceiro da Victoria (Victory), which commemorates the expulsion of the French in the beginning of the 19th century.

After that, you take the road N-550 to the town of Redondela, well known for its famous viaducts. If you have enough time, you should visit Vigo first. From the top of O Castro Hill, the main vantage point of the city, you can see the Cíes Islands located in the ría (coastal inlet) of Vigo. 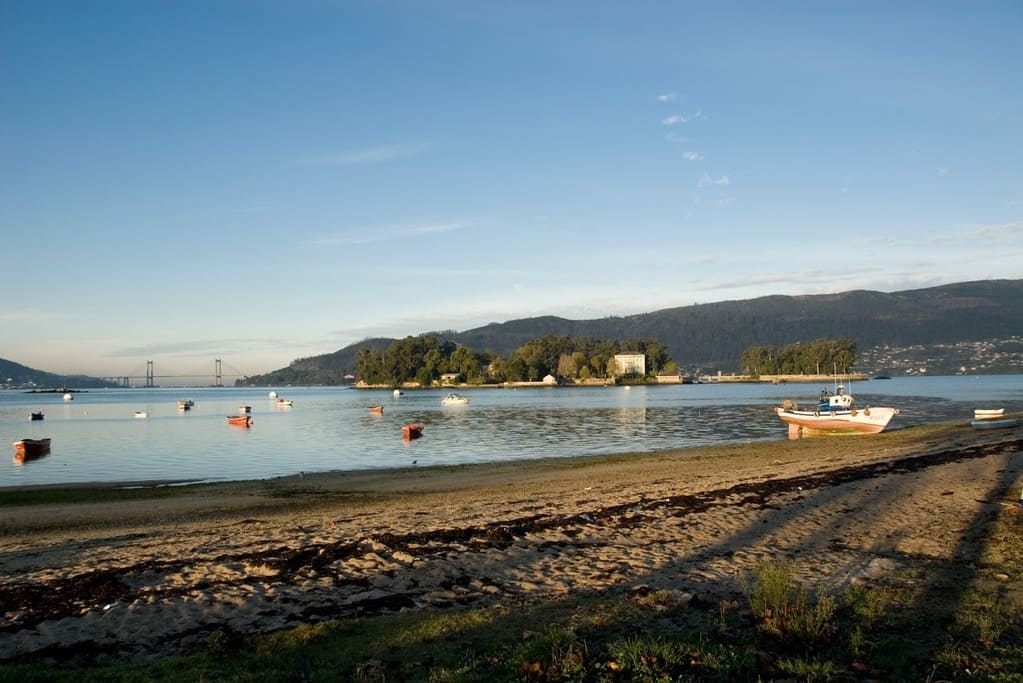 Again on the Way, you cross the Strait of Rande, located in the Ría de Vigo, where the epic battle between the defeated Spanish-French fleets and the victorious Anglo-Dutch army took place in 1702.

The San Simón Island, located in the cove of the same name, in the Rande Strait, has been used for different purposes along history, from being a monastery to a concentration camp and a hospital.

Redondela has a rich archaeological heritage, with petroglyphs, dolmens or megalithic tombs and parietal art. The Romanization fostered the growth of the town, and the Way of Saint James became more important during the Medieval Ages. The train viaducts are symbols of the town and it has a beautiful historical centre.

We continue our journey, and we are now on our way to the capital of the province of Pontevedra. Our steps will take us first to Cesantes, from where we will enjoy an excellent view of the San Simón Island.

There, we will see another statue associated with Jules Verne's novel, Twenty Thousand Leagues Under the Sea, in this case in the middle of the ría (a coastal inlet), as a tribute to Captain Nemo. This set of sculptures is partially covered by high tide.

The Cove of San Simón, with the Rande Bridge at the entrance and the mouth of the River Verdugo on the background, is a natural space of great value. It is part of the Natura 2000 network as a Site of Community Importance.

We will continue our journey from Cesantes and go down to Arcade (in the municipality of Soutomaior), famous for the highly valued oysters.

A recommended visit, if we have time, because it is off the way, is the Soutomaior Castle, built in the 12th century. Outside its walls we can find stately gardens with a rich, varied, century-old flora. 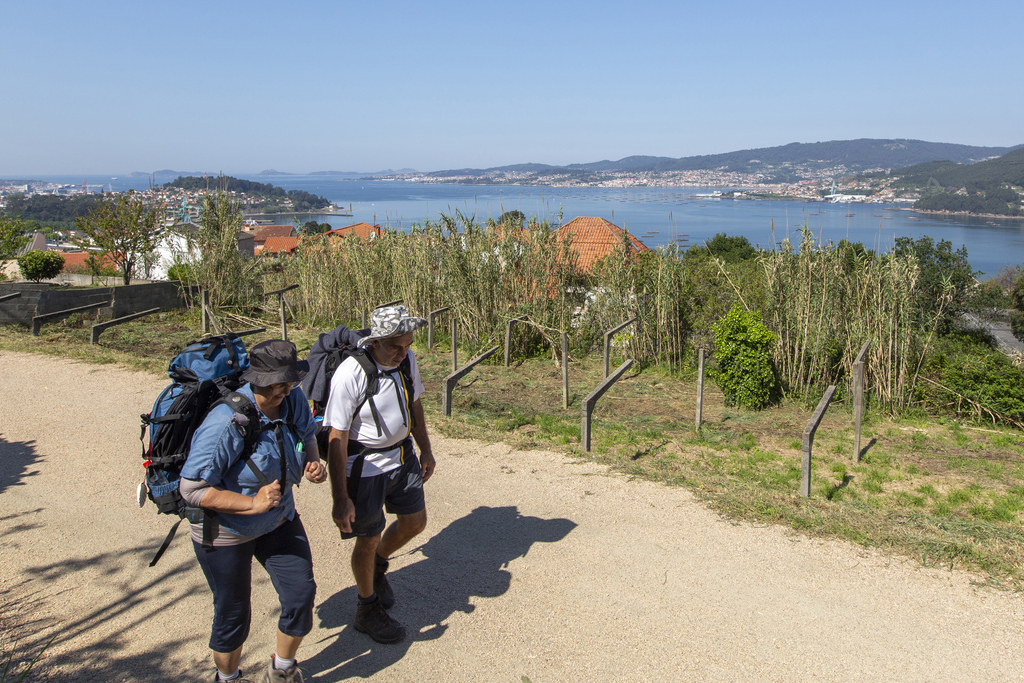 We will move on from Arcade to Ponte Sampaio, crossing the bridge over the River Verdugo. In this spot, from 7 to 9 June 1809, a battle was fought that would be crucial for the retreat of Napoleon's troops from Galicia during the Spanish War of Independence.

We are now getting closer to the town of Pontevedra. In the place of O Pobo, we will take the itinerary along the banks of the River Tomeza, in the municipality of Pontevedra, with its riverside-forest variety of trees, the main species of which are willows, ashes, chestnut trees, black poplars, birches and alders.

The capital of the province is a monumental town, boasting a beautiful historic centre, where it is recommended to take a leisurely stroll around the streets and squares.

The Convent of San Francisco and the Sanctuary of A Peregrina ("the Pilgrim Virgin"), the patron saint of the province of Pontevedra, are two points of reference. The Chapel of A Peregrina, built in 1778, featuring a Baroque-style façade with Neoclassical elements, is one of the representative buildings of the town. At the top, you can see images of Santiago, San Roque and A Peregrina protecting the believers on their way to Santiago de Compostela via the Portuguese Route.

The Ruins of San Domingos (14th-15th centuries) feature on the list of must-know spots in this Boa Vila (Galician for "good town"). As far as the squares are concerned, Ourense and A Estrela, surrounding A Ferrería, are iconic, and others, such as O Teucro, A Verdura, As Cinco Rúas, Méndez Núñez and Mugartegui (or A Pedreira) are also worth mentioning. 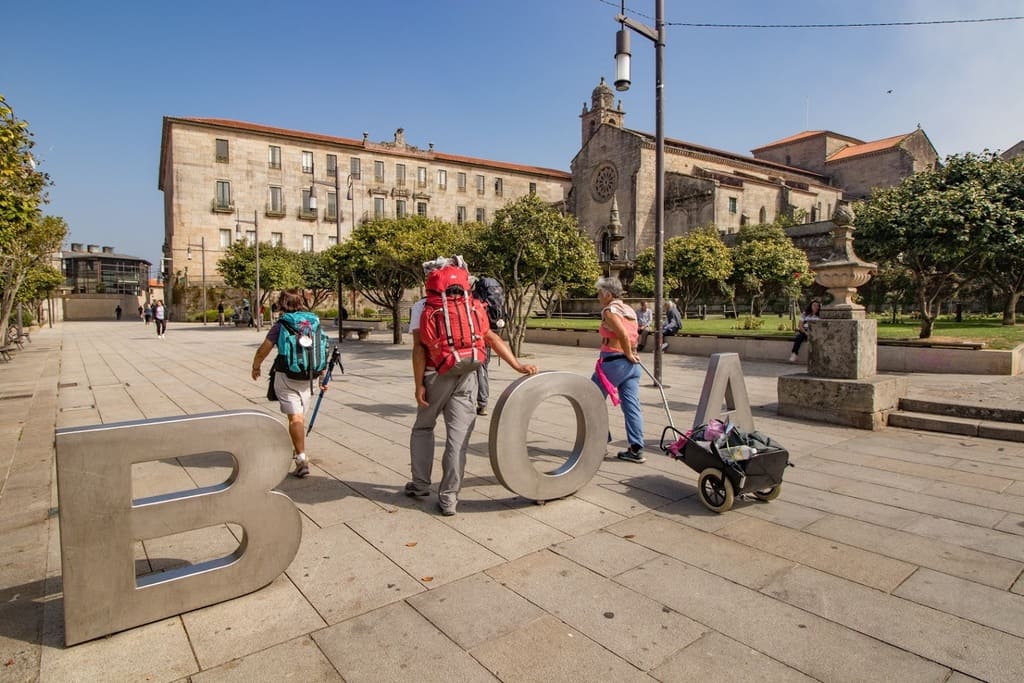 The Basilica of Santa María, whose construction began in the 16th century at the initiative of the Guild of Fishermen, was declared a Historic-Artistic Monument in 1931, and it is a religious symbol of great significance in Pontevedra.

The lively atmosphere in the old town is an invitation to try the local cuisine in one of its many restaurants and tapas places.

We will leave the capital across the O Burgo Bridge, over the River Lérez, and, a bit further, we will pass by the observatory of A Xunqueira de Alba, a 70-hectare wetland classified as a Natural Space of Local Interest.

After leaving Pontevedra, you will then set foot in Barro, another municipality on the Way, where we will get to know the River Barosa Natural Park, with a beautiful scenery of waterfalls and backwaters. A prominent feature of this landscape is the Barosa Waterfall, being 30 metres high, and a series of 14 restored watermills.

We reach the town of Caldas de Reis, by the rivers Umia and Bermaña, and characterised by its rich landscapes and thermal waters.

The park-garden and the oak wood of the River Umia form a magnificent natural space that has been declared a Picturesque Spot and a Historic Garden, boasting over a hundred different species from all the continents, some of which are rare in Galicia.

In the old town of Caldas de Reis we find the Church of Saint Thomas Becket, who went on a pilgrimage to Santiago de Compostela around the year 1167 and made a stop here.

In this town, we can find two spas that are very close to each other, and they are both worth a visit: Balneario Acuña, an example of Galician architecture from the early 20th century; and Balneario Dávila, with an exceptional bamboo plantation. The traditional use of hot springs, with healing properties, dates back to Roman times. The fountain of As Burgas, ornamented with a lion head that the hot water comes out of, is another point of interest.

You leave the town of Caldas de Reis and head to the town of Valga. You will pass by the Church of San Miguel, built in the neoclassical style, and dating back to the 18th century.

On our way to Pontecesures, you will make a stop at the Church of San Xulián, built at the order of archbishop Xelmírez. This church has a Romanesque origin and one of its major features is the bell tower. 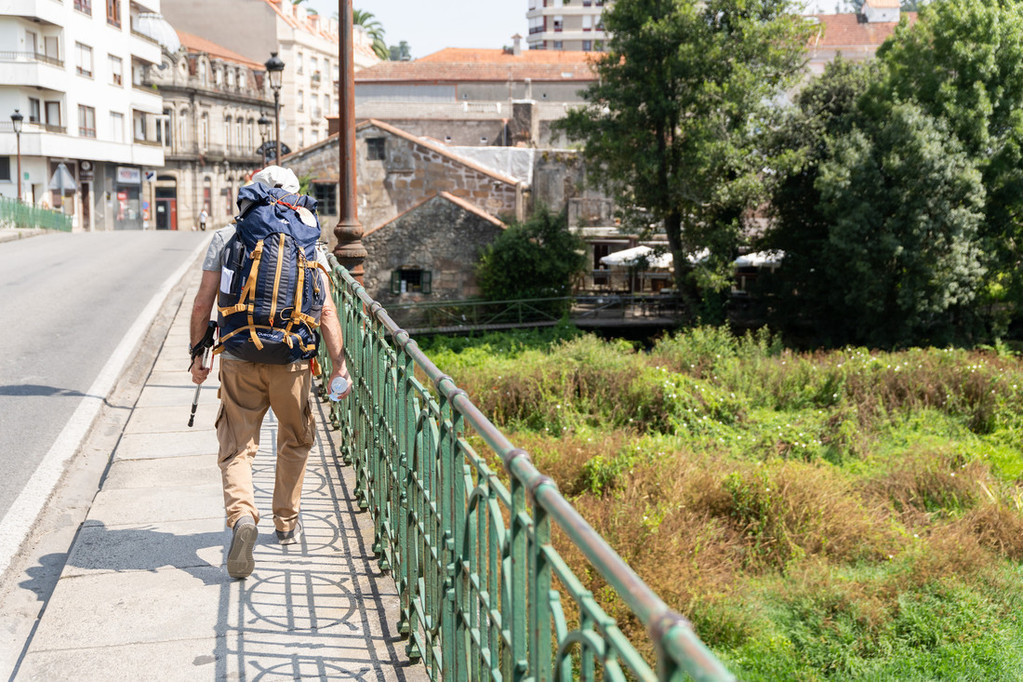 One of the most popular attractions in Pontecesures is the ten-arched bridge that will take us across the River Ulla to the town of Padrón, in the province of A Coruña.

The cruceiros (stone crosses) are another major attraction in Pontecesures. The one in Carreiras, from the middle of the 18th century, features an image of the Queen of the Angels, the patron saint of this small village, and the one in San Xulián, from the 14th century, used to belong to the Chapel of San Lázaro, which no longer exists.

The Ulla River, which is the third-longest river in Galicia after the Miño and the Sil, is part of the Ulla-Deza river system, a Site of Community Importance that also encompasses the rivers Bermaña, Valga and Sar, and flows into the ría (coastal inlet) of Arousa.