The Route of Father Sarmiento

Father Sarmiento was behind this variant of the Portuguese Way of Saint James which crosses the region of O Salnés. The Galician Dominique monk returned from Madrid to go on a pilgrimage to Santiago de Compostela in 1745, and he recorded this journey of 190 km in his work Viaje a Galicia (Journey to Galicia). This beautiful route along the coast between the rías (coastal inlets) of Pontevedra and Arousa, which was named after him, begins in O Burgo Bridge and continues through the towns of Poio, Sanxenxo, O Grove, Meaño, Cambados, A Illa de Arousa, Vilanova de Arousa, Vilagarcía de Arousa, Catoira, Valga and Pontecesures. There, this route meets the traditional Portuguese Way until reaching the Cathedral of Santiago de Compostela. 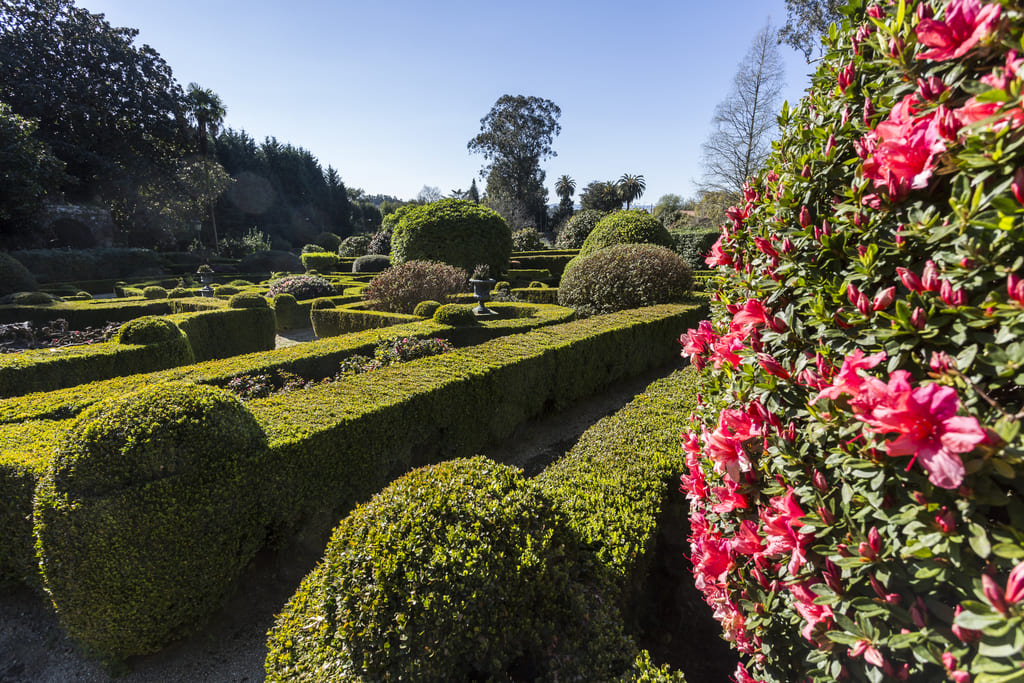 Coastal towns of international touristic interest as Combarro, beautiful wild beaches with a blue flag, islands such as A Illa de Arousa or Illa da Toxa or Cortegada, the impressive isthmus of A Lanzada, archaeological sites, pazos (Galician manor houses) as Ulloa, Rubiáns or Torrado, religious monuments and vineyards (especially under the Designation of Origin Rías Baixas) are part of this attractive route.

Father Sarmiento started the journey in the town of Pontevedra, crossing the O Burgo Bridge. Following the footsteps of this prominent figure along the northern coast of the Ría de Pontevedra, pilgrims visit the monastery of San Xoán de Poio, a gem of the As Rías Baixas heritage.

The village of Combarro, renowned for its seaside houses, cruceiros (stone crosses) and hórreos by the sea, is very well preserved. In addition, it has a great number of attractive hotels and souvenir shops. Wandering around the streets of the village and enjoying a drink on any of the bar terraces available is well worth it. 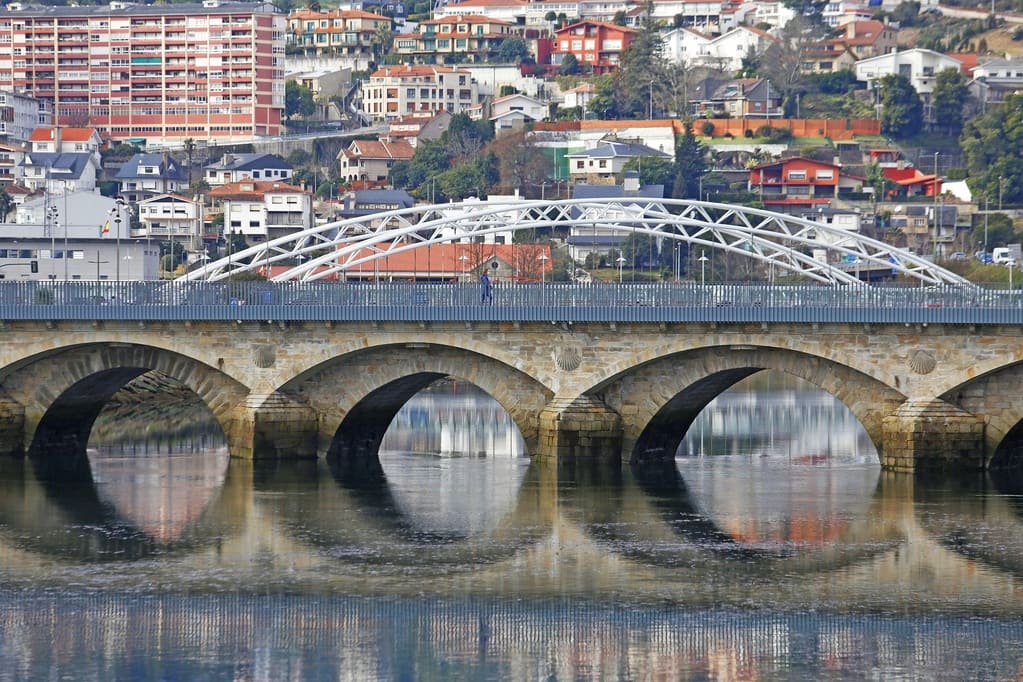 The route continues through the beaches of Chancelas, Punta Samieira, Raxó and Xiorto, also having a blue flag. The viewpoint of A Granxa offers amazing views of the ría. Along the way, you will also discover the Areas Beach, before entering Sanxenxo to enjoy its seaside promenade. There, you can find the Silgar Beach, also having the blue flag. Sanxenxo is an important international tourist site in Galicia. Moreover, it is the town in Spain with the greatest number of blue flags, thirteen this year.

A bit over two kilometres away from the town centre of Sanxenxo, after crossing Punta Bicaño, the route continues until Portonovo, a tourist town having a beach and a marina. Then, it goes along the coast, crossing some beaches and the points of Cabicastro, Sefexeira and Paxariñas until reaching the beach of Montalvo, with dunes of great natural value.

Along the route, you can enjoy the amazing views of the island A Illa de Ons. The parish of Noalla is a perfect viewpoint to admire the two islands (A Illa de Ons and Onza or Onceta). Along this part of the way there are several beaches such as Bascuas, Pragueira, Foxos, Area Gorda and A Lapa, and finally A Lanzada, the most incredible intertidal complex of dunes in As Rías Baixas, and in Galicia. 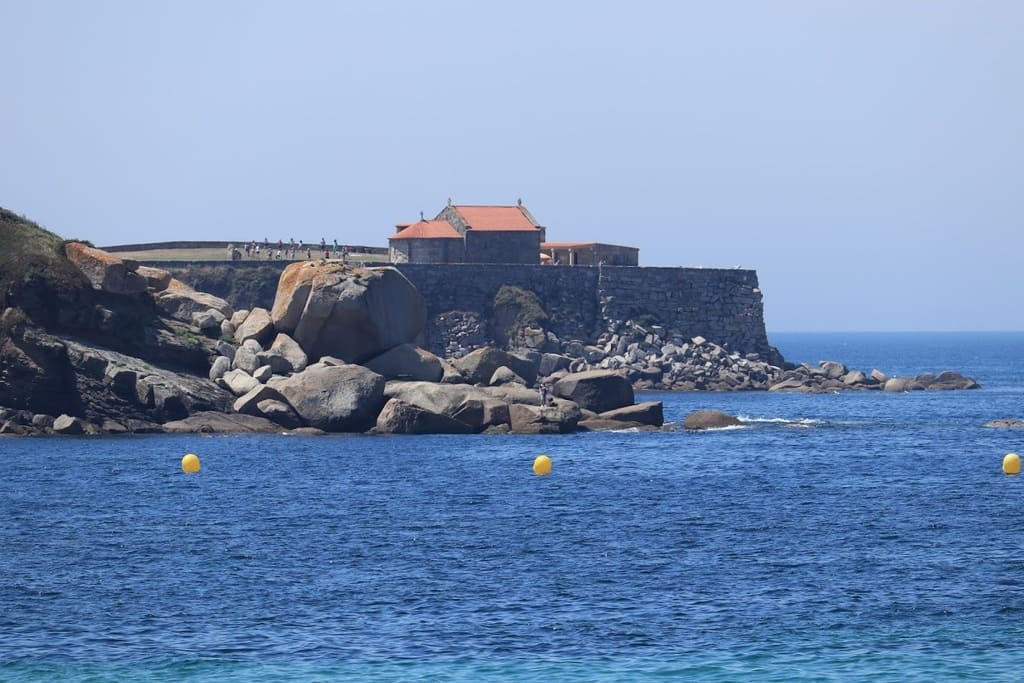 The history of the Nosa Señora da Lanzada Chapel is linked to fertility legends and rituals. The 2.5-kilometre beach attracts thousands of tourists and water sport enthusiasts every summer. In the castro (a pre-Roman hillfort settlement), some important archaeological remains which provide invaluable information about Galician history have been discovered.

A Lanzada marks the boundary between Sanxenxo and O Grove and is the starting point of the third stage.

The route of Father Sarmiento goes along O Grove Peninsula, another of the main attractions in As Rías Baixas, whose popular cuisine and beaches stand out. These beaches, having dune systems, go until the place of San Vicente do Mar, and from there, the way crosses a stretch of rocky coastline, passing by the Canelas Beach. From this part of the coast of O Grove, on the west side of the peninsula, you can enjoy a fantastic view of the islands of A Illa de Ons and Sálvora. The latter is also part of the Atlantic Islands National Park.

On the way towards the place of O Porto de Meloxo you go past the north coast of O Grove, at the bottom of the ría of Arousa. In this part of the way there are many beaches. Here, hikers can admire A Illa de Arousa, the smallest island municipality in Spain, having amazing beaches and a fantastic natural area, O Carreirón. 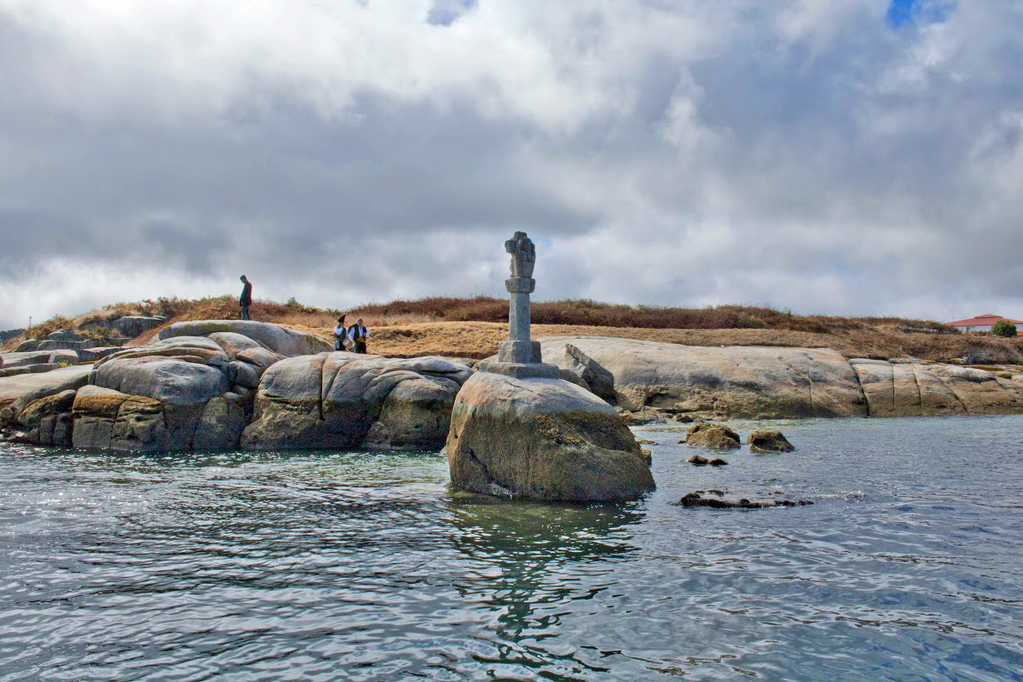 Then, the route crosses O Grove, a coastal and tourist town where visitors can taste delicious seafood dishes paired with wines under the Designation of Origin Rías Baixas. After leaving the town centre, you reach A Illa da Toxa, an important leisure and thermal village with spas, old soap and cosmetic factories, hotels, a golf course, a marina, a casino and other attractions.

This stretch of the route surrounds the intertidal complex Umia-O Grove, an inlet listed as a Wetland of International Importance. It goes from the Umia River estuary to the town of Cambados, the birthplace of the Albariño wine, which is, according to the Galician writer Álvaro Cunqueiro, the king of all Galician wines.

The salt mines which would give the name to the region of O Salnés were located in this inlet. Here, water flows through the channel existing between the coast and A Illa da Toxa. Many birds choose this ecosystem to spend the winter or as a stopover in their migration. Grey herons, mallards and dunlins are some of the species that can be oberved in this natural space.

Cambados is a land of wines and it has a splendid historic centre declared Cultural Interest Site. The major attractions of the old town are the Pazo de Fefiñáns, the arch-bridge, the keep of the tower and the San Bieito Church. 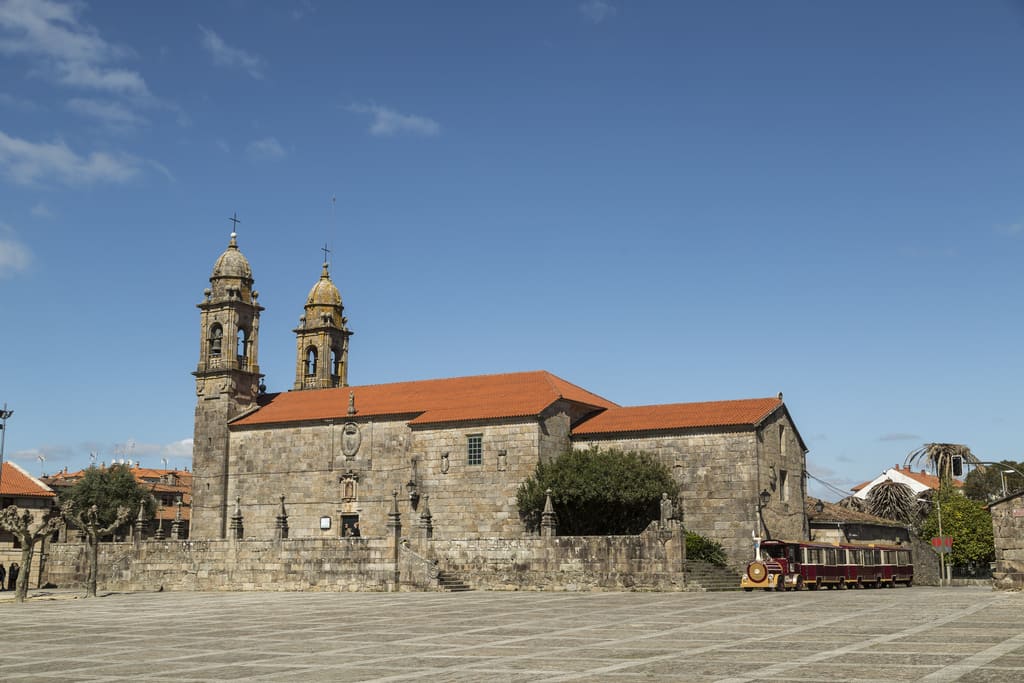 The town has much more to offer: the eighteenth-century Pazo de Torrado, used as a centre for local temporary exhibitions; and the seventh-century Pazo de Bazán, which is now a Parador Nacional de Turismo (luxury hotel), stand out for their history and their heritage value.

Cambados is the capital of the growing and production of the Albariño wine, one of the best white wines in the world. Moreover, it has been declared the European Wine City 2017 and this is another important reason to visit the town. Food is also a major attraction in this municipality, where you can find and taste delicious seafood.

Without leaving Cambados, in the parish of San Mamede de Corvillón, pilgrims can visit the museum Museo Muíño de Mareas da Seca, a water mill dating from 1622 which used to work with the tidal movement. 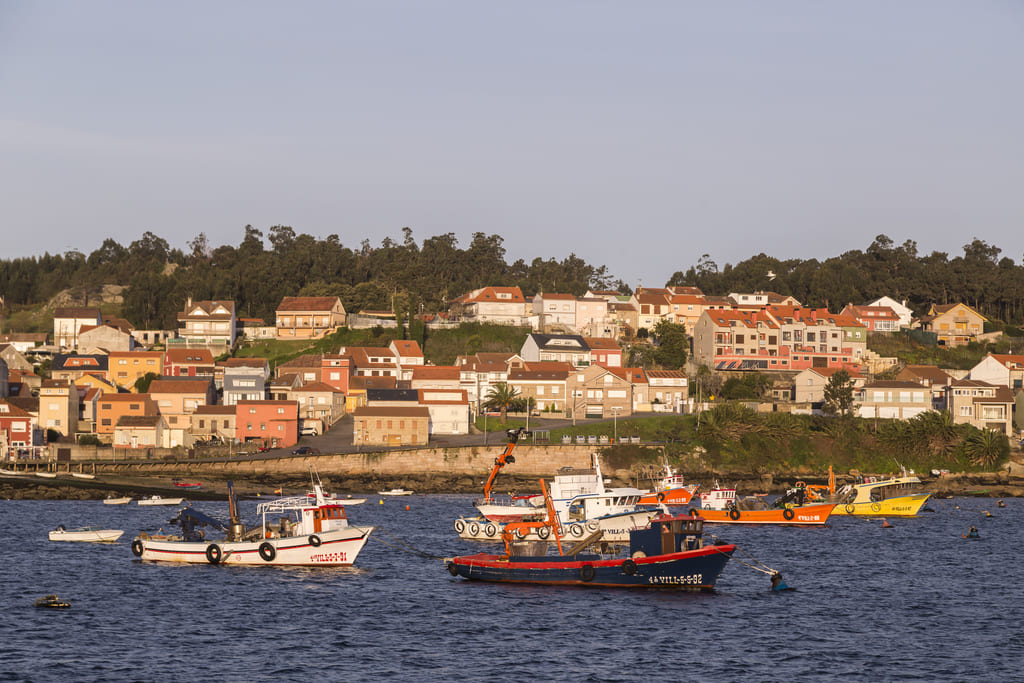 Then, the route continues towards A Illa de Arousa, a beautiful coastal town with interesting places to visit as the fishing port O Xufre and amazing beaches. Two of these beaches, namely O Bao or Camaxe and Area da Secada, have a blue flag. To reach the island, where 11 of its 36 kilometres are beaches, you have to cross an almost two-kilometre bridge. Here, you can discover the natural park O Carreirón, listed as a Special Protection Area. The highest peak of the island is the viewpoint O Con do Forno, where you can admire amazing views of the town.

After crossing the bridge and leaving the island, you walk along the coast towards the town of Vilanova de Arousa, birthplace of the writer Ramón María del Valle-Inclán, whose house-museum is a recommended visit.

After leaving the town centre, the route returns to the seaside, passing by other beaches, as As Sinas, and it continues along the coast towards Vilagarcía de Arousa, crossing Vilaxoán. This village, has a fishing port and is popular for its cuisine. 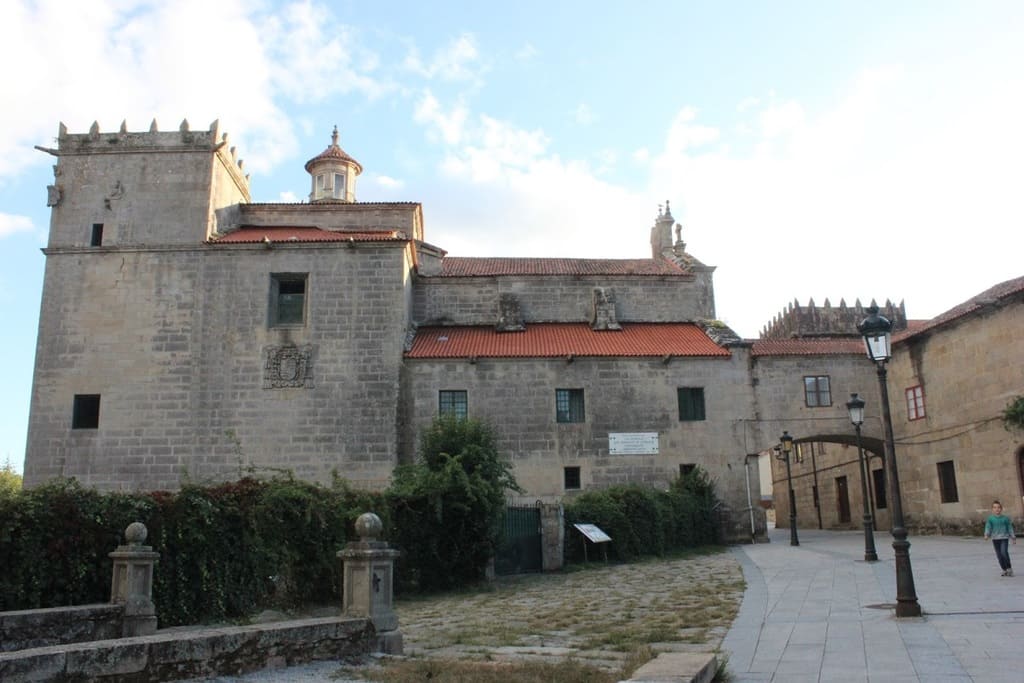 In Vilagarcía de Arousa, you should visit the Pazo de Vista Alegre and the convent, both of them declared National Historic-Artistic Monuments. The capital of the region of O Salnés has a lot of attractions which you can discover following two different routes: the Wine Route and the Pazos Route. Among the pazos, it stands out the perfectly-preserved Pazo de Rubianes, owned by the only lordship in Galicia.

O Carril is another must visit since this parish is the birthplace of the popular clams bearing the same name. Opposite its coast you can see the Cortegada Island, part of the National Park, which has one of the most important laurel forests in Europe.

You reach the estuary of the Ulla River walking along the coast next to an area of salt marshes, and the Ría de Arousa is left behind. The route continues till the town of Catoira, where you find the Oeste Towers, used in the past to defend Santiago de Compostela against the Viking attacks. Only the remains of two of the original seven towers are standing, and they are located next to a small chapel devoted to the Apostle Saint James.

On the first Sunday of August, Catoira hosts the spectacular Viking Festival, declared of International Tourist Interest, where locals revive the Scandinavian invasions that took place one thousand years ago. 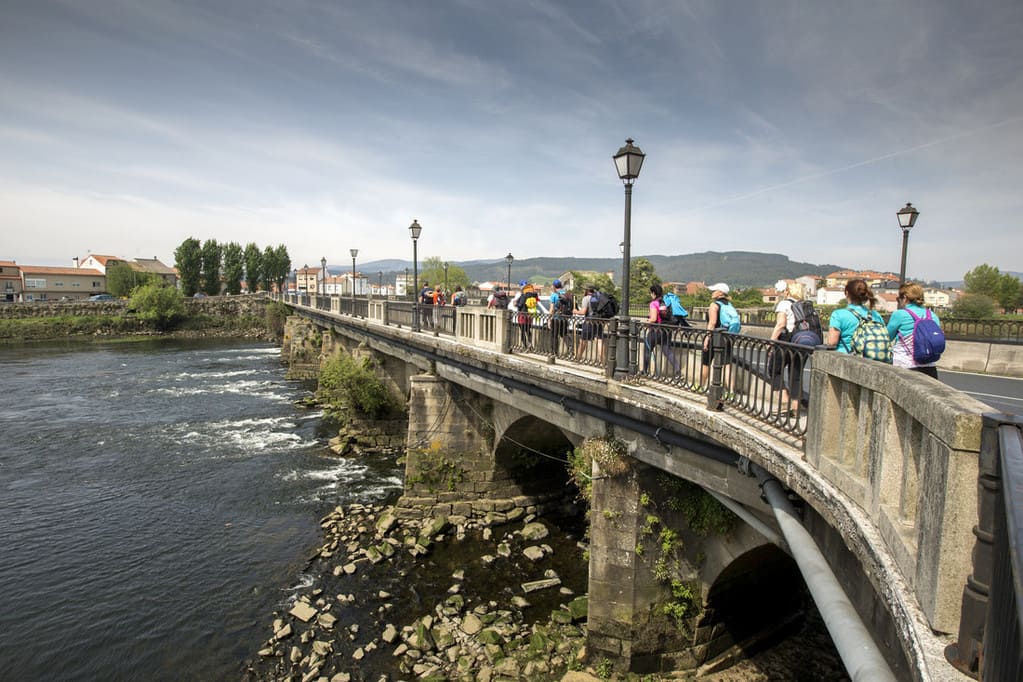 Once here, the route across As Rías Baixas is almost over, and then pilgrims have to continue towards Padrón and finally Santiago de Compostela. From Catoira, you cross the River System Ulla-Deza, going through the town of Portas until reaching Pontecesures. Here, at the border between the provinces of Pontevedra and A Coruña, the Way of the Father Sarmiento meets the Portuguese Way.