Festival of the Coca

In the past young sailors from Redondela overcame the dragon and ever since, every year, their victory is celebrated in the lively Dance of the Spades. Besides these young men, young winged girls, dressed in white, and representing the virgins, popularly known as the penlas, also participate in the dance. These girls dance on the shoulders of the burras, women who play the role of their mothers. The procession of the Virgin of A Gabacha, the colourful flower carpets and the re-enactment of the death of the Coca bring thousands of people to Redondela every year. They take part in this festival, which starts the night before the Corpus Thursday and continues until Sunday.

According to the legend, this dragon, a symbol of evil during the Middle Ages, lived on the sea near Redondela, close to San Simón Island. This creature would visit the town, destroying everything on its way and kidnapping young girls. On Corpus Thursday this monster parades through the town fleeing from the Virgin of A Gabacha, who marches in a parade through the streets, beautifully arranged with colourful flower beds, under a shower of petals. 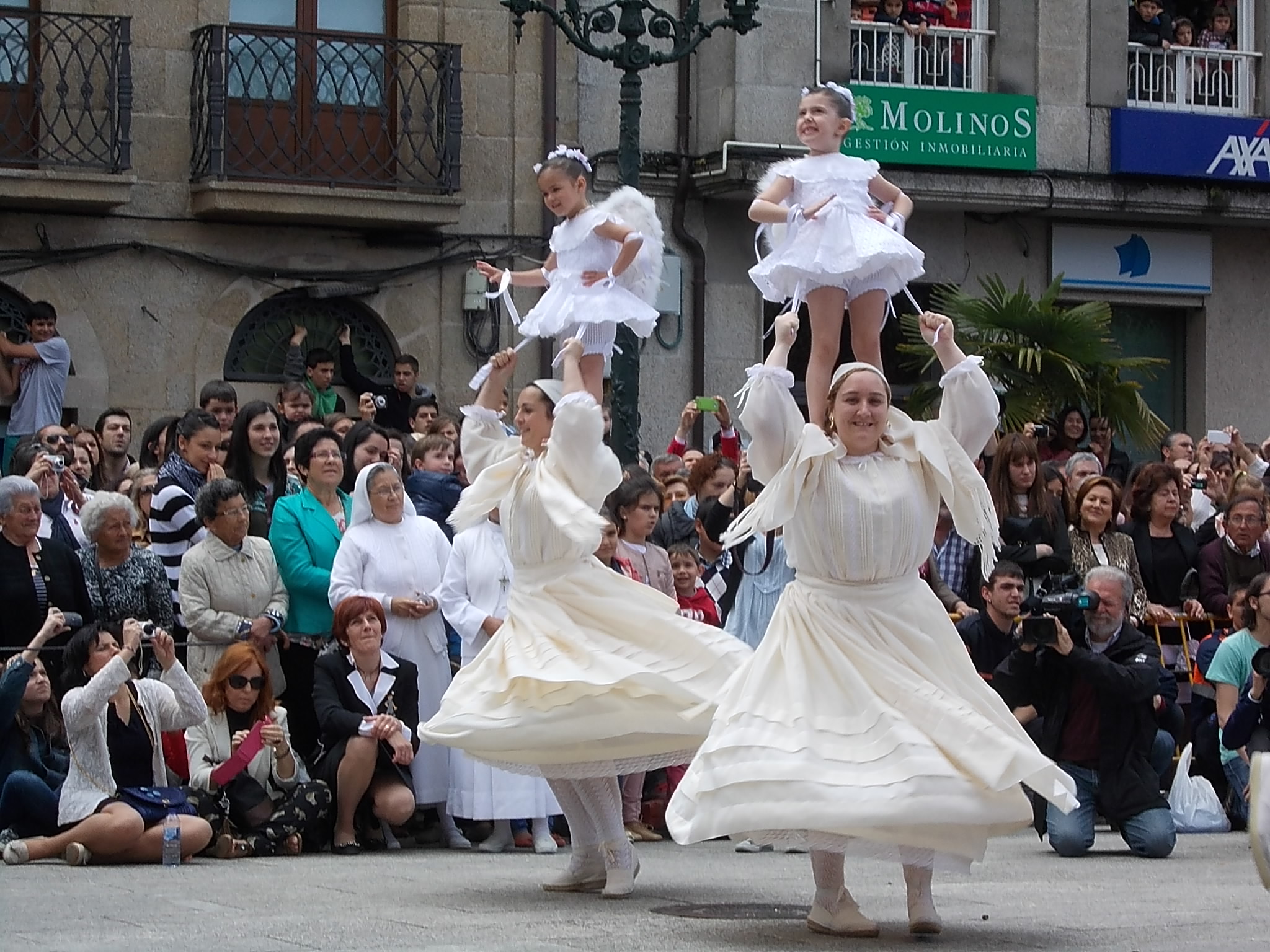 The figure of the Virgin, escorted by the dancers, is carried from the Church of Vilavella to the Church of Santiago. She protected the locals from the attack of this dragon. At this celebration, the Dance of the Spades is performed just after the re-enactment of the death of the Coca. The group of dancers is made up of twenty men −the mestre (master), four abaelas or rabelos, four guides or primeiros, and a dozen dancers with spades−, and the penlas. They dance to the sound of the pipes and to the beat of the drums at the square of the Casa da Torre. Costumed figures, known as xigantes e cabezudos (giants and big-heads), also participate in the parade. 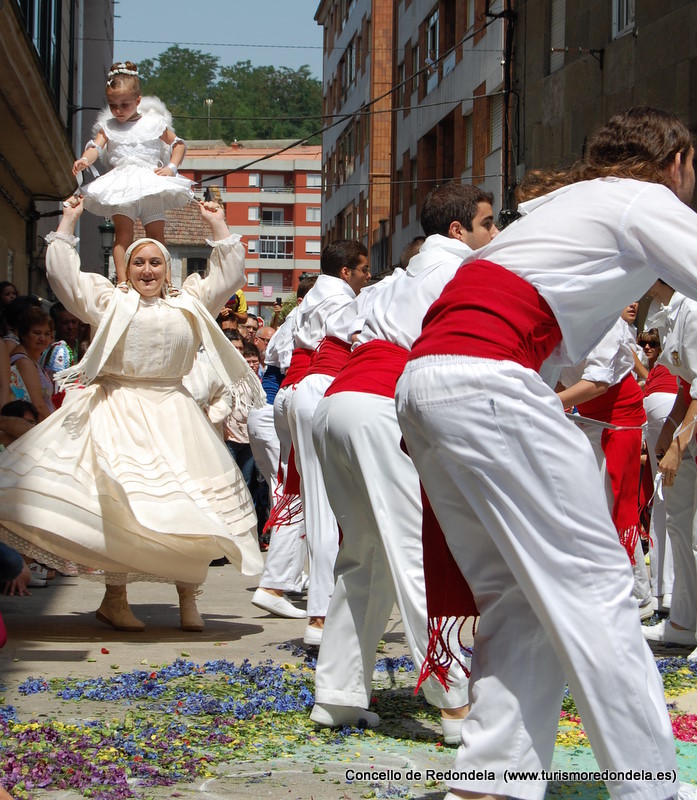 The origin of this festival dates back to 1482, when the day of the Corpus Christi was declared a holy day by the Bishopric of Tui. At that time the Town Council of Redondela and the different guilds provided the images for the procession, and they also organized the dances and the performances of the event. The re-enactment of the fight of Saint George and the dragon has been part of the tradition of the town until today. In Monçao, just across the river, this tradition has also been preserved, but in this case Saint George is the one who faces and defeats the dragon. The first evidence about the existence of the Dance of the Spades dates from the 16th century.

The figure of the Virgin returns to the Church of Vilavella in a procession held on Friday after the events of the main day of the festival. On Saturday a flower offering is held on this church. And, on Monday the procession of the Corpus marches through the streets of the parish of Vilavella, and the Dance of the Spades and Penlas is performed again. 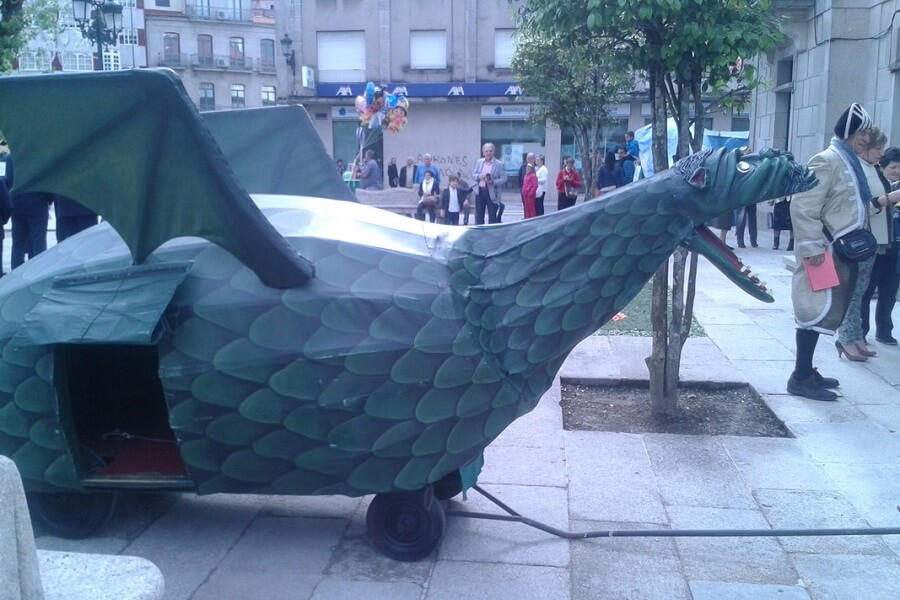 Although many theories exist, according to some historians, the name Coca may come from the Latin name Cocatrix, which means crocodile. This is evidenced by various documents dating from 15th century; in earlier documents the name coqueriz was also mentioned. Another hypothesis is that the Coca may have its origin in the coco (similar to the boogeyman), a monster that frightens children. Other researchers believe that this beast may be associated with the three-headed giant Cacus, son of Vulcan.

If we compare the appearance of the monster in some photographs of the parade dating from the 1920s with its current appearance, the head of the Coca is the only element that has remained unchanged. Over the years, the head of the creature has been repeatedly restored and improved. According to some written evidence the tradition of laying carpets on the streets for the procession dates from the 16th century. However, flower carpets have been placed since 1950, in the beginning they consisted of bulrushes and flowers spread out on the streets, and later, from 1965 onwards, they were arranged with artistic designs.

As the popular Spanish saying goes: "there are three Thursdays in the year that shine brighter than the Sun: Holy Thursday, Corpus Christi, and the Day of the Ascension". In the town of Redondela the second Thursday has been closely linked to the Festival of the Coca.