This event, declared Festival of Tourist Interest in Galicia, is one of the most interesting celebrations of the Entroido (carnival) in As Rías Baixas. In several rural towns in the province of Pontevedra you can enjoy the popular altos (halts) or atranques (blockades) of the xenerais (generals), where two contenders argue while criticizing and making fun of current local, political or social affairs.

Along the banks of the Ulla River, in the warmth of their homes, older people reminisce about old traditions while the youngsters are eager to be part of them. This carnival festival known as Xenerais da Ulla is a spectacular show where xenerais, riding horses and wearing bright valuable attires which impress for their tradition and the production work, evoke excitement among participants. 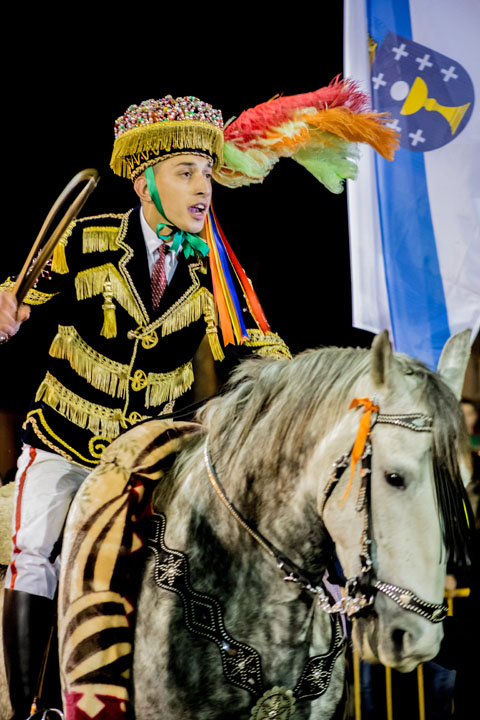 During the parades, participants wear costumes with thousands of jewellery pieces whose manufacturing process lasts for months. They are a different type of army, consisting of peaceful and funny soldiers dressed up in elaborate handmade garments. The most outstanding feature of these nineteenth-century uniforms is the peculiar three-cornered hat adorned with peacock feathers. Horses also wear ornaments on their heads and chests.

The xenerais ride on horseback around the villages from the 16 February to the 10 March, reciting the popular altos or atranques, real verbal battles used to measure their oral abilities where they spare no one. Before that, the correos (couriers) announce their arrival and the neighbours offer them food and drinks. The xenerais go from door to door chanting the vivas, giving the families their good wishes. They are followed by the comparsas (carnival troops) of coros de bonitos (young boys and girls) and coros de vellos (consisting of elderly people).

The symbolism and connotations of the rural Entroido celebrations in the province of Pontevedra in towns as A Estrada, Silleda or Vila de Cruces make this a perfect destination for this time of the year. Having the opportunity to admire flowered camellias and to taste the lamprey from the Ulla River or a cocido (Galician stew)… Those who come once will repeat the experience again and again!